Do 76ers, With Or Without Ben Simmons, Have An Outside Shot At A Title This Year? 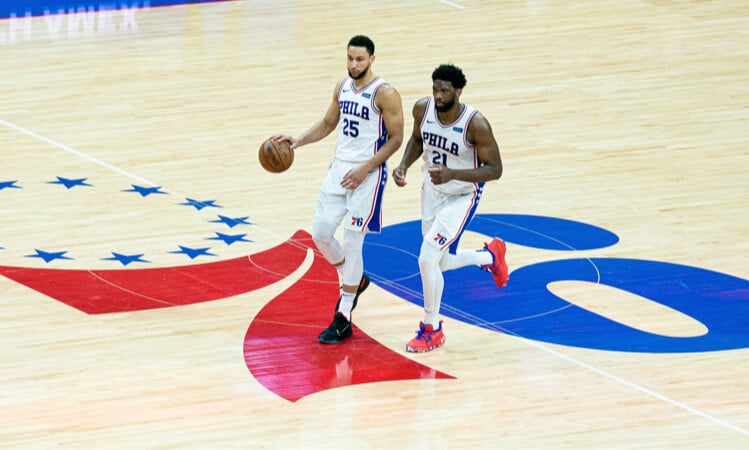 In the four NBA seasons he’s played since he was drafted first overall, Ben Simmons has made three all-star teams, made the all-defense first team twice, finished second in the voting for Defensive Player of the Year once, won a Rookie of the Year award, made the all-NBA third team once, and been for the most part the second-best player on a team that has gone 195-114 (.626) during the regular season and made the playoffs all four years.

Reading that, you’d think Simmons’ tenure in Philadelphia has been an unqualified success and he’s delivered full value as that top draft pick in 2016.

He’s made five three-pointers in 275 career regular-season games and zero in 34 career playoff games. If he has worked to develop an outside shot, or even a mid-range shot, in any offseason, it hasn’t yet translated to him being willing to attempt such shots during games.

And then there was the 2021 postseason, when he shot 34.2% from the free throw line, added to his reluctance to even drive to the basket, presumably because of a fear of being fouled. He got the bulk of the blame for the 76ers’ shocking second-round collapse against an Atlanta Hawks team that, had Simmons brought even his B-game, by all reasonable estimates would have gone home in five games.

When that disastrous playoff series ended, the odds probably would have been about +5000 that Penn Bets would spend the first five paragraphs of its 2021 Sixers betting preview focused on Simmons. He was a sure thing to be jettisoned. The 76ers brass knew they had to trade him and find a different second banana for superstar center Joel Embiid. Simmons even played the “You can’t break up with me, I’m breaking up with you!” game by demanding a trade after GM Daryl Morey had already called every team in the league about a Simmons trade.

Surely, Ben Simmons would never play another game for the Sixers, and surely, any 2021 76ers betting previews would focus on the new-look team, with hardly a mention of their off-loaded Aussie all-star.

And yet, here we are. After a delay and some withheld paychecks, Simmons is reporting to camp. He might well be in uniform when the Sixers tip off their season on Wednesday, Oct. 20, against the New Orleans Pelicans. The weird story of a “Process” that has repeatedly proven untrustworthy is getting even weirder.

And there’s more uncertainty than ever over what sort of futures bets to place on the Sixers, as bettors try to figure out if this will be another Embiid-Simmons team, a team with Embiid plus a different all-star, a team with Embiid and various prospects and picks that won’t add to the 2021 win total, or a team with Embiid, no Simmons, and nothing in place of Simmons. Good luck factoring in that kind of variance.

The best-case scenario — which is, if we’re being honest, a pipe dream scenario — would be that Simmons and other pieces turn into Damian Lillard a few weeks into the season and the Sixers are one of the most serious title contenders in the league.

The worst-case scenario is that Simmons remains on the team and remains Playoff Ben (i.e., a net minus on the court), the injury-prone Embiid gets injured again, and the 76ers are a sub-.500 mess.

All sorts of middle ground also exist between those. Not knowing what they’ll get from, or for, their second most talented player this season makes the Sixers one of the scariest teams to wager on or against.

Despite the extreme uncertainty, the Sixers come into this regular season looking at similar title odds to where they were positioned in 2020-21. They have the seventh-shortest odds at most Pennsylvania sportsbooks, ranging from a low of +1600 at BetMGM, FOX Bet, and all of the Kambi-powered operators (Unibet, Barstool, BetRivers, Parx, etc.) to a high of +2000 at DraftKings, FanDuel, and Caesars. The six teams considered more likely to win the NBA title than Philly are the Nets, Lakers, Bucks, Warriors, Jazz, and Suns.

It follows that the Sixers have the third-best odds to win the Eastern Conference, behind loaded (but, because of Kyrie Irving’s refusal thus far to get vaccinated, drama-plagued) Brooklyn and defending champ Milwaukee. The 76ers vary from +750 at DraftKings and BetMGM to +900 at FanDuel.

The Sixers’ win total is set at 50.5 at most books, with a slightly higher vig on the over. They nearly exceeded that line in just 72 regular season games last year, finishing 49-23 to secure the top seed in the East. They also won 51 or more games in each of the previous two full 82-game (pre-COVID) seasons.

It seems unlikely that enough will go wrong for this team to miss the playoffs. Beyond Embiid and Simmons, it returns Tobias Harris, Danny Green, Seth Curry, Tyrese Maxey, Matthysse Thybulle, Shake Milton, and Furkan Korkmaz, while adding veterans Georges Niang and Andre Drummond. But what if Simmons is a zero (he doesn’t play and they can’t trade him) and Embiid gets hurt? The Sixers are as high as +1000 at DraftKings to miss the postseason.

Is this the year for Joel Em-VP?

Turning away from the team situation and toward individual props (which can, of course, depend to varying degrees on team success), Embiid comes off his MVP runner-up season as high as +800 at FanDuel to win that honor this season. At most sites, only Luka Doncic, Kevin Durant, and Giannis Antetokounmpo are shorter money. Given the Simmons turmoil, Embiid might get extra credit if he leads the Sixers to another outstanding regular season.

A mega-contrarian Simmons MVP bet pays 250/1 at most books, for what that’s worth.

The 76ers’ top draft pick, Jaden Springer, is as high as 100/1 for Rookie of the Year. There’s little sign at this point, though, that the guard out of Tennessee will see much playing time.

Second-year player Maxey is the Sixers’ best shot at a Most Improved Player award, priced as high as 50/1, while Simmons is 60/1 and Milton and Thybulle are both 100/1.

Three Sixers are in preseason contention for Defensive Player of the Year: Simmons pays +500, Embiid can be found at +1200, and Thybulle sports a +3000 tag.

Maxey, Milton, and Thybulle are each as high as +5500 for Sixth Man of the Year. Korkmaz, who’s steadily improved each season to this point, might actually have more value there at 150/1.

Lastly, Doc Rivers is +3000 for Coach of the Year. If he can navigate the Embiid-Simmons situation successfully, or thrive with a Simmons-less roster, there’s a chance he can shake off the stink of his latest playoff collapse and garner some awards consideration.

With the start of the season still a week away, the PA sportsbooks haven’t revealed their notable NBA promos and specials yet, but DraftKings does have one unusual prop, inspired by the popular local podcast, The Rights to Ricky Sanchez: Simmons to convert his first free throw attempt of the regular season can be bet at -145 on the “yes” or +125 on the “no.”

The special bet was conceived under the assumption that Simmons would be shooting that first free throw for a different team, but if it happens for the Sixers — especially if it happens in Philadelphia — the pressure on Ben goes up a little and there just might be more value in the “no” side.

There’s still time for other sports betting operators to get creative. Here’s one suggestion: Offer a head-to-head prop, between Simmons and Kyrie, for who suits up for a new team first. A month or two ago, Simmons would have looked like a lock. Now, with the NBA’s Atlantic Division held hostage by dueling malcontents, it might be a tossup.