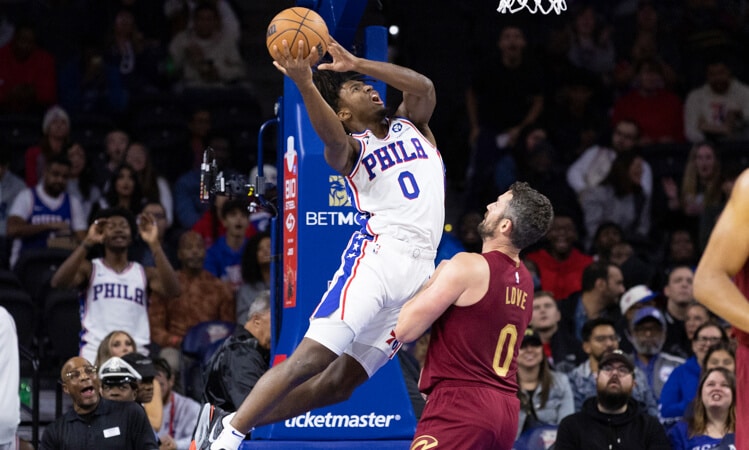 When the Phillies were leading the Braves 1-0 in their MLB playoff series last Wednesday, mobile sportsbook FOX Bet posted a special “odds boost” for Pennsylvania bettors: the Phillies, the Eagles, and the 76ers all to win their respective championships in 2022-23, at a payout of +100000 — or 1000/1. The supposed un-boosted odds were 750/1.

The Phillies have since advanced to the National League Championship Series, and the Eagles have since beaten the rival Dallas Cowboys to improve to 6-0. There’s still a long way to go on all fronts, but it isn’t so crazy to think that there could be a lot of money riding next spring on the Sixers to deliver in the NBA playoffs.

Will this season’s Sixers be different from the previous five years’ talented teams that reached the playoffs only to flame out in the first or second round? We’re some seven months away from starting to get that answer, but there are two elements to this team that at least feel different: In an offseason that saw a rival coach suspended, an owner all but forced to sell, and a star on last year’s title team punch a teammate, the 76ers’ off-court drama was minimal (especially compared to the Ben Simmons situation a year ago); and this roster boasts legitimate depth and the potential to survive Joel Embiid’s bench minutes without enduring plus-minus catastrophes.

They may yet prove to be the same old Sixers, and the sportsbooks are more or less pricing them that way in terms of futures odds, but there’s suddenly an optimism permeating the Philly sports scene that has some bettors sensing value on this basketball team.

Ring the bell, hammer the over

See Caesars Sportsbook for the most extreme example of Sixers optimism. According to an article Caesars published this week, the 76ers over 51.5 wins is the most lopsided NBA over/under market by tickets, with 96.6% of all bets on their win total placed on the over.

And that’s despite Caesars posting a higher line than most other books. At FanDuel, DraftKings, and BetMGM, the line is 50.5 wins. Caesars’ 51.5 does come with more manageable -120 juice on the over, whereas DraftKings charges -130, BetMGM has -135, and FanDuel posts a whopping -142. Yep, at pretty much every mobile sportsbook in Pennsylvania, the bettors believe in the over.

It’s understandable, given the roster. Back-to-back MVP runner-up Embiid will now have a full season with former league MVP James Harden at the point. Third-year guard Tyrese Maxey shows every indication of being ready to make another leap. Tobias Harris gets the luxury of being fourth banana and newly acquired veteran P.J. Tucker brings a toughness and hustle that previous iterations of the post-“Process” Sixers lacked.

Draft day acquisition De’Anthony Melton, a 24-year-old fifth-year guard widely praised for his defense, could prove the even more impactful addition. GM Daryl Morey also picked up veterans Montrezl Harrell and Danuel House Jr., who join familiar Sixers faces Matisse Thybulle, Shake Milton, Georges Niang, Paul Reed, and Furkan Korkmaz on the bench. There may yet be a midseason trade turning two or three of those names into one more reliable producer, but the roster as it now exists is far deeper than any seen taking the court for the Sixers in decades.

Despite all the upgrades, the futures odds on the 76ers are almost identical to a year ago.

For those nervous about another disappointing end to a postseason, a wager on the Sixers to win the Atlantic Division during the regular season may pack the most value. They’re third on the odds board at all books behind the Celtics and Nets, ranging from +260 at FanDuel to an alluring +300 at DraftKings.

Another regular-season-only option: The 76ers to earn the No. 1 seed in the East is as high as +500 at DK, and most wins in the entire NBA pays +1100 at both DK and BetMGM. Interestingly, DraftKings offers a prop on the Sixers to have the best record at the All-Star break priced at just +550, behind only the L.A. Clippers, an indicator that Philly appears to have a softer schedule before the break than after.

Looking to fade the Sixers? BetMGM and Caesars both pay +750 on a wager on the team to miss the playoffs.

Basketball is a team sport, but there’s plenty of fun to be had betting on individual honors — and lots of realistic options on Sixers superlatives.

For league MVP, Embiid is either the second or third favorite at all books, behind Luka Doncic and, in some cases, Giannis Antetokounmpo, priced at either +600 or +650. He’s the favorite at most books to lead the league in scoring average (definitely take the +350 from FanDuel over the +200 from BetMGM), though Caesars has the big man second behind Giannis at +275. DraftKings offers a market on Embiid to make the All-NBA first team, pricing him at +125, taking into account the fact that he needs to beat out two-time MVP Nikola Jokic at the center position.

Harden is the favorite to lead the league in assists per game, and he’s closer to a cinch than Embiid is in scoring, at a high price of +175 at FD. Harden is also an MVP longshot option, ranging from 50/1 to 100/1, while Maxey can also be found on MVP odds boards anywhere from 125/1 to 300/1.

The more realistic bet on Maxey is to win Most Improved Player. He’s the second favorite at all books behind Minnesota’s Anthony Edwards, at payouts of +1000, +1100, or +1200 depending on the sportsbook.

For those looking for gratification of the more instant variety, the Sixers open their season — and the entire NBA season, in fact — Tuesday night in a nationally televised game in Boston against the Celtics, and those wagers will be graded without needing to wait for another 81 or more Sixers games to conclude. Most sportsbooks favor the Celtics by 2.5, and the best moneyline price on the 76ers is +120 at DraftKings.