Philadelphia 76ers And Joel Embiid Are Heating Up Together, And Sportsbooks Are Taking Notice 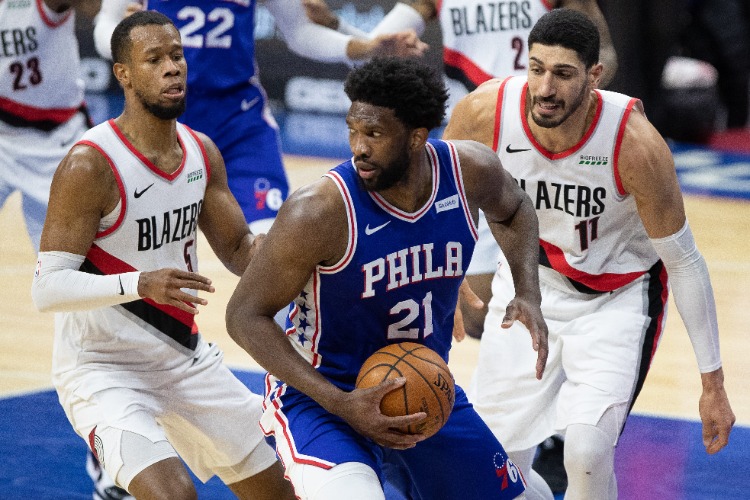 Pre-season at BetMGM, the 76ers were +900 to win the Eastern Conference. Now they’re +550, still behind the Brooklyn Nets at +175 and the Milwaukee Bucks at +275, but a look at the standings right now — the Sixers are two games up on the Bucks and four games up on the Nets with more than a third of the season in the books — and perhaps those numbers will be even tighter as the season wears on.

One thing is for certain, however: It’s not a coincidence that Embiid’s MVP odds and the Sixers’ chances of winning the conference are moving in tandem with each other. Fact is, as goes Embiid, so goes the 76ers.

Need more proof? Take a look at some other NBA futures props over on DraftKings. In the MVP race, the next 76er listed is Ben Simmons at +25000. It may as well be +infinity. Most Improved Player? Shake Milton at +25000 (see: Simmons, as for what that number means). Defensive Player of the Year? Oh yeah: Embiid, at +1000. Milton checks in again at +5000 for 6th Man of the Year, but really, take Embiid off the court, and this team is probably struggling to make the playoffs. With Embiid, they’re a title contender.

But really: It all comes down to Embiid, who is healthy, happy, and having a season for the ages. Embiid is averaging 29.1 points a game and leads the league in efficiency, edging out Nikola Jokic, another player who is on pace to set some serious records this year.

Embiid is also averaging 11 rebounds a game, and is shooting 37.7% from three-point range. To give some idea of what that latter number means, consider this: Luka Donic — the preseason MVP favorite — is shooting 30% from downtown.

It gets better, though.

As fivethirtyeight.com pointed out via StatHead, Embiid’s combination of usage and efficiency has only happened once before: Steph Curry’s historic 2015-16 season.

In fact, the fivethirtyeight piece dives even deeper, crediting Embiid’s conditioning with making the Sixers a better overall team, a better defensive team, and a dominant fourth quarter team — they’re currently out-scoring their opponents by a ridiculous 12.4 point margin in the fourth quarter.

Of course, it takes a team, and finally, it seems, the 76ers have built a squad around Embiid that accentuates his play. Simmons is Simmons, and Tobias Harris continues to do Tobias Harris things, but the additions of Seth Curry and Danny Green has opened up the court for Embiid to truly become the dominant force he’s teased in the past.

And to think — this team nearly blew itself up in an effort to get James Harden. (It is a fascinating what-if, however: According to reports, the 76ers were prepared to deal Ben Simmons, rookie Tyrese Maxey — who has played above expectations — as well as draft picks. And while Harden is clearly a superior player compared to Simmons, a fair question is if he is a better fit with Embiid. We’ll never know, alas.)

Tonight, the 76ers continue their west coast swing with a game against the Portland Trail Blazers, followed by games in Phoenix and then in Utah. From there, a quick two-game homestand against Houston and Chicago, and then a two-game road trip to sunny Florida to take on Toronto (thanks to coronavirus restrictions). After that, a four-game homestand heading into the All-Star break.

A lot can happen over the next 11 games, but if the Sixers could take, say, eight of these 11? Well, those odds at the top of the story will probably be a lot smaller than they are now.