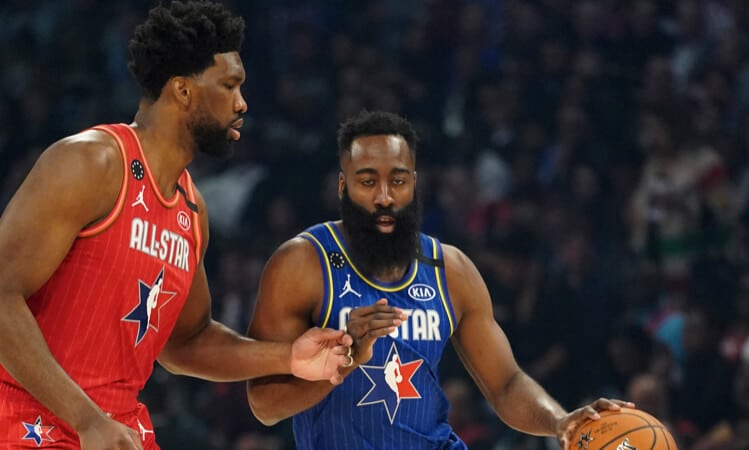 With Joel Embiid healthy, entering his prime, and playing at an MVP level, 76ers General Manager Daryl Morey adopted a “win now” mentality entering Thursday’s NBA trade deadline. And he made a trade that has the legal Pennsylvania sportsbooks believing this team can do just that.

As communicated with the world via Woj Bomb at 1:16 p.m. Thursday (and then a few followup clarification bombs minutes later), the Sixers are sending Ben Simmons, Seth Curry, Andre Drummond, an unprotected 2022 first-round pick, and a protected 2027 first-round pick to the Brooklyn Nets for James Harden and Paul Millsap.

In terms of players contributing on the court to this 2021-22 Philly team, Morey turned Curry and Drummond into Harden and Millsap.

Debate over whether the Sixers gave up too much has already begun and could continue for years — it’s certain possible that the 25-year-old Simmons alone will be more productive over the remainder of his career than the 32-year-old Harden. And trading Simmons to a division rival where he figures to fit in nicely, with other superstars who can cover for his refusal to shoot, could very easily haunt the Sixers.

But from a “win now” perspective, the 76ers appear to have nailed it. Sitting at 32-22, fifth in the Eastern Conference, they were a one-superstar team most would have pegged to lose in the first or second round of the playoffs. They just became a two-superstar team with actual championship hopes.

Fourth or fifth favorite now to win it all

Before the trade, the Sixers had odds to win the title ranging from +1200 (BetMGM) to +1600 (Kambi-connected sportsbooks including Barstool, BetRivers, Parx, Unibet, and TwinSpires). After the trade was reported, the team dropped from +1400 to +850 at DraftKings Sportsbook, and shrunk again to +750 minutes later, while FanDuel reduced the Sixers’ title odds from +1300 to +550.

DK now sees the 76ers as the fifth most likely team to win the title, while FanDuel’s odds peg them fourth.

Other sportsbooks Penn Bets checked, including FOX Bet and the various Kambi books, took all Sixers-related futures odds down temporarily.

DraftKings’ other odds were also pulled off the board for a time. Prior to the trade, DK had the Sixers at +475 to win the Eastern Conference and -180 to win the Atlantic Division, and it had Embiid at +200 for NBA MVP. None of those markets was available at 2 p.m. Thursday.

But FanDuel had all of those markets still listed and saw odds shakeups in most of them. The Sixers were +650 to win the Eastern Conference at FanDuel at the start of the week, and the number came all the way down to +240 after the trade. Only the Nets, at +210, had shorter odds — yes, the sportsbooks now consider the Sixers more likely to reach the finals than the Milwaukee Bucks or Miami Heat.

At -170 to win the Atlantic Division at FD before the trade, the 76ers are now -260, as they sit 1.5 games ahead of Toronto, two games up on Boston, and three in front of the Nets. (There’s actually some debate over how quickly they’ll jell with Harden and whether the regular season win rate is likely to improve, but FanDuel seems to think they’ll be just fine.)

As for Embiid’s MVP odds, he was +230 at FanDuel at the start of the week and +220 after being teamed with Harden. The big man figures to cede some scoring numbers to the former league MVP who just joined his roster, so it will be interesting to see whether Nikola Jokic or Giannis Antetokounmpo, both playing without a second superstar alongside them, benefit indirectly from the Simmons-for-Harden trade.

But it’s safe to say getting Embiid an MVP trophy isn’t Morey’s top priority. It’s winning a title with Embiid while he can. Simmons had abdicated any responsibility to help that happen, so now it’s up to Harden to try.