After a three-day testing period for a limited selection of bettors, Barstool Sportsbook is now available on the web and as a mobile app.

It’s time to pull up a stool: After a three-day testing period open only to select customers granted a special access code, Penn National Gaming’s Barstool Sportsbook opened at 1 p.m. Friday for wagering to all 21-and-over sports bettors within Pennsylvania’s borders.

This brings the number of legal mobile sportsbooks in the Keystone State to an even 10, all launched within the last 16 months, beginning about a year after the U.S. Supreme Court ruled that each state could enact its own sports betting legislation. The competition in Pennsylvania is growing fierce, but there are many who believe if anyone can challenge FanDuel Sportsbook and DraftKings Sportsbook for supremacy, it’s the new Barstool-branded offering.

While the two daily fantasy sports behemoths have raced to the front of the pack in numerous states thanks to enormous DFS player databases, national name recognition, and early launch dates, Barstool brings it own massive database of relatively young, mostly male sports enthusiasts who are attracted to the media property’s often controversial articles, podcasts, and personalities.

“The Barstool Sportsbook app is the centerpiece of our Company’s omni-channel strategy,” Penn National CEO Jay Snowden said in a recent press release about the brand for which PNG paid $163 million in January to acquire one-third ownership.

With the website and mobile app now live, we can see that Barstool isn’t trying to reinvent the sports betting wheel. If Barstool is going to change sports wagering, it will be via the promotion of it, not via the app’s aesthetics.

Hey, don’t I know you from somewhere?

As you can see when positioned side by side with the FanDuel app, the Barstool look is not exactly revolutionary: 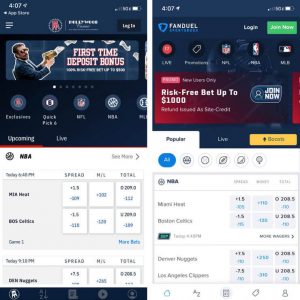 That said, the app is easy to use and mostly intuitive to navigate.

And there are a few differentiators in terms of promotions and betting options.

One plays on the literal sitting-on-a-barstool notion with what is essentially a sports betting happy hour, called the “Barstool Power Hour.” Every weekday from 5-6 p.m., there’s a “Reduce the Juice” promotion, with discounts on certain bets.

Barstool Sportsbook also allows bettors to change the line on a game (with the pricing changing accordingly). This is not a brand-new innovation, but it distinguishes the book from some of its competitors, and is highly functional with a simple click/drag slider graphic:

As expected, Barstool, similar to FOX Bet, is building wagering options around its forward-facing personalities. Dave Portnoy, Dan “Big Cat” Katz, Matt “Marty Mush” Cahill, and Brandon Walker each have their favorite bet of the day posted, and customers are presented with the option to either back or fade that bet. These don’t appear to be offered at special odds or with a reduced vig — Barstool is simply letting you know which sides of certain games its “experts” are on.

Like most mobile sportsbooks, Barstool offers its share of daily odds boosts, intended to entice bettors with prices that appear, and often are, tilted in the customer’s favor.

For example, on Thursday, before the site went live to the public, the sportsbook offered enhanced odds on the Pennsylvania NFL teams to win the Super Bowl, boosting the Eagles from 25/1 to 55/1 and the Steelers from 20/1 to 55/1.

Barstool’s welcome bonus offerings are in line with current industry standards in competitive sports betting states. Just by registering for an account, even without making a deposit, new customers receive a $10 bonus in site credit. And first deposits are matched with a risk-free first bet up to $500.

Notably, Barstool Sportsbook is powered by European tech provider Kambi, which works with half of the online operators in Pennsylvania. That means unboosted odds and lines will mostly look identical to those found at DraftKings, BetRivers, and other Kambi-backed PA books.

Deposit and withdrawal methods mirror most of the mobile sportsbooks in Pennsylvania, and include the following:

Withdrawals, but not deposits, can be made via paper check or Venmo.

Pennsylvania is the first state to welcome a Barstool Sportsbook, but it won’t be the last. In addition to PA, Penn National runs casinos in legal online sports betting states Colorado, Indiana, Illinois, Iowa, Michigan, and West Virginia.