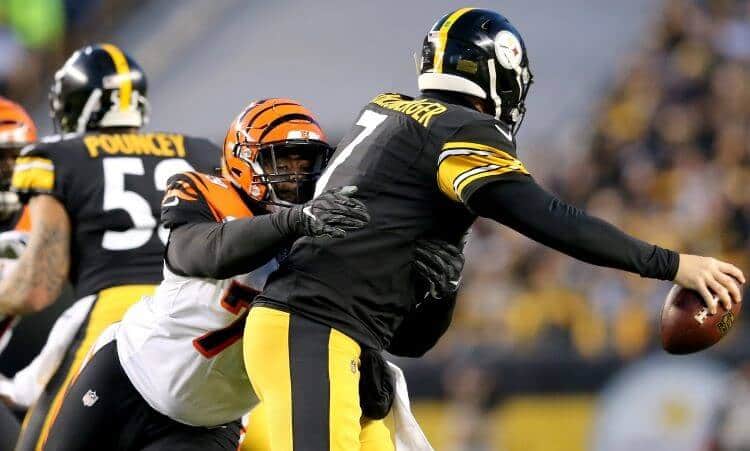 The Steelers are tied with the three other AFC North teams headed into Week 3 of the NFL season, and if they want to remain in that position, they’d better beat the least feared among them.

Pennsylvania’s online sportsbooks listed injury-riddled Pittsburgh Thursday as either a 3-point or 3.5-point favorite hosting the Cincinnati Bengals, while the Baltimore Ravens and Cleveland Browns are each favored by about a touchdown over the Detroit Lions and Chicago Bears, respectively.

That point spread amounting to a field goal for the Steelers might seem modest considering they have beaten the Bengals in 10 of their last 11 meetings, Cincinnati hasn’t won at Heinz Field since 2015, the Steelers’ odds to win the AFC North are around 5/1 compared to 20/1 or longer for Cincy, and their season win total over/under prop stands at 8.5 compared to 5.5 for the Bengals.

But … there’s those injuries. The spread shrank by a point or more during the week after it was revealed that Ben Roethlisberger injured his left pectoral muscle in Sunday’s 23-16 loss to the Las Vegas Raiders. That’s on top of a groin injury to defensive all-purpose-disruptor T.J. Watt during Sunday’s game, on top of a range of ailments that could sideline or limit other key defenders.

The Bengals came out flat offensively themselves, meanwhile, in a 20-17 loss to the Chicago Bears in which four turnovers cost them a chance to surprise everyone by taking control of a tough division.

It sets up an important early-season contest in which the loser could be spending the next three months looking up at the rest of the AFC North.

DraftKings opened the Steelers as a 5.5-point favorite, lowered them to 4.5 as of Monday, and dropped the line to 3.5 by three days later, with that same spread used by Caesars.

The other sportsbooks, meanwhile, all favored the Steelers by 3 as of Thursday, applying some extra juice to Pittsburgh backers. The best option there was the -114 offered by the sites using Kambi odds such as BetRivers and Unibet.

There was a fairly wide range on the moneyline, with those Kambi-backed bookmakers again offering the best return for a Steelers win at -167.

That points total is among the lowest for this week’s NFL slate — half the games have an over/under of 50 or higher — and reflects the two teams’ offensive struggles to start the season, with their aggressive defenses able to pick up the slack for them to a certain extent.

The Bengals have averaged 22 points in their two games and the Steelers just 20. The Steelers’ offensive line has done a poor job of protecting 39-year-old Roethlisberger, but their peers in Cincinnati have let young Joe Burrow get sacked nine times himself. A week before an ACL injury ended Burrow’s rookie season last November, the Steelers sacked him four times in a 36-10 thrashing.

Both teams have young playmakers, deemed potential NFL stars, who offer the best chance to make the game something other than a low-scoring defensive slugfest highlighted by turnovers and quarterback hits.

Already known for a talented corps of young receivers, the Steelers spent their first round draft pick on Alabama sensation Najee Harris to jumpstart a moribund running game and take some pressure off their aging quarterback.

While Harris scored his first TD last Sunday, it was on the receiving end. An inexperienced and thus far inadequate offensive line has cleared enough room for him to gain just 83 yards on 26 carries in the two games, leaving the running game behind even last year’s league-low sluggish pace.

Steelers fans — and bettors — will hope for more out of Harris while potentially admiring the work of the Bengals’ own top rookie, wide receiver Ja’Marr Chase, who has TD catches of 40-plus yards in both of his games as a pro. He joins Tyler Boyd, a former Pitt star who knows all about shining at Heinz Field and caught seven passes for 73 yards vs. the Bears.

Whether the young offensive stars-to-be or the two teams’ defensive ball hawks end up the focus Sunday remains to be seen, just like how much Roethlisberger is bothered by his injury (though, like Watt, he’s expected to play). The only sure thing is that whichever team loses is going to be hurt real bad in its chance to challenge for a postseason spot in defiance of current odds.