New customers can get a 'risk-free' bet up to $1,000 with BetMGM Sportsbook. 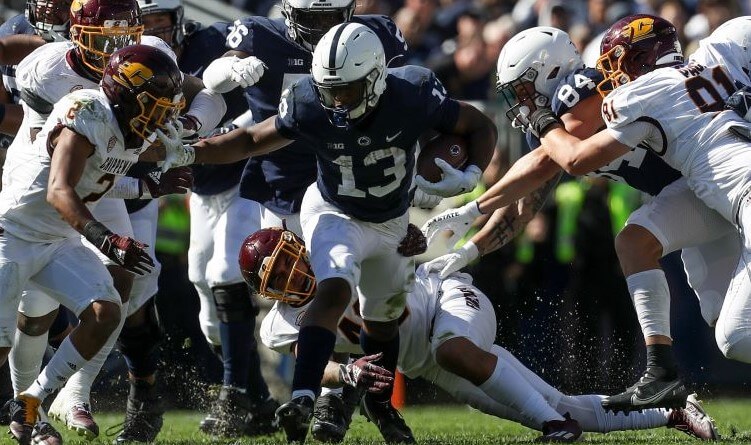 Saturday’s slate of NCAA football action gives new BetMGM customers a chance to make use of a generous bonus offer while considering bets on Penn State and Pitt as heavy home favorites against conference foes.

Pennsylvanians who have not previously registered a BetMGM account are eligible for a “risk-free” first bet of up to $1,000. New customers must use the BetMGM bonus code PENNBETS to obtain the offer on the sportsbook’s site.

The BetMGM PA risk-free bet has the potential to be quite lucrative. After making a deposit and placing a wager for anywhere between $10 and $1,000 on NCAA football or other options, the player receives a form of insurance if the bet loses. If that occurs, BetMGM will refund the account with equivalent free bet credits that can be used to try to recoup the loss. (If the initial bet wins, of course, there’s no need for the risk-free offer.)

If, unfortunately, the first bet loses, the free bet credits matching the amount of the loss will be placed in the customer’s account within 24 hours. Players then have seven days to make use of the free bets.

While the welcome bonus is available currently for any wager, there are three NCAA games involving the Pennsylvania schools to consider Saturday.

These two schools are both 1-0 in Big Ten play by virtue of Northwestern opening the season with a 31-28 win over Nebraska and Penn State doing so by beating Purdue 35-31. That’s pretty much where their similarities end.

Since those openers, the Nittany Lions have rattled off three more wins, over Ohio University, Auburn, and Central Michigan — the latter by a somewhat disappointing 33-14 margin last Saturday. Northwestern, meanwhile, has lost three successive games at home against some startlingly lackluster opposition in Duke, Southern Illinois, and Miami (Ohio).

This combination of trends has BetMGM making Penn State a 25.5-point favorite for the 3:30 p.m. Saturday contest as of Thursday morning. It might be tough to swallow a bet on the PSU moneyline, which is priced at -3000 (Northwestern is +1200). The sportsbook has the over/under on the points total at 51.5.

The Nittany Lions, now ranked No. 11 by the AP, were coming off a dominating road victory over Auburn when they failed to cover the point spread for the first time all season in the 19-point win over Central Michigan. Still, there was plenty to like, with Sean Clifford continuing a strong season in throwing four touchdown passes and running back Kaytron Allen earning Big Ten Freshman of the Week honors by running for 111 yards and a score on 13 carries.

Thus far, Penn State’s running attack has taken a big step forward from last year, with Allen’s fellow freshman Nick Singleton earning the same Big Ten honor the two prior weeks. That could loom large, in that the Wildcats have been giving up 160.8 rushing yards per game, second worst in the Big Ten.

Northwestern is led on offense by quarterback Ryan Hilinski, who completed 26 of 44 passes for 257 yards vs. Miami, and running back Evan Hull, who was held to 62 rushing yards and 10 receiving yards Saturday after averaging 217 all-purpose yards in the season’s first three games.

Aside from everything else, the Lions enter the contest with a big takeaway edge by leading the conference in turnover margin (+8), while Northwestern is last (-5).

The one thing that could hearten longtime Northwestern fans is the memory of a 29-6 win at Beaver Stadium the last time the Wildcats visited in 2014. The two teams likely stacked up a lot closer to one another on paper at that time, however.

Pitt would hope to take advantage of a similar mismatch at 8 p.m. Saturday against visiting Georgia Tech, which may be in even worse shape than Northwestern. The school just fired coach Geoff Collins and its athletic director after losses against Clemson, Mississippi, and UCF by a combined average of 30 points. He has been replaced by offensive line coach Brent Key.

While Pitt suffered a home loss against Tennessee in its second game, the Volunteers are looking like a strong team, now ranked 8th nationally, with the Panthers No. 24.  Pitt has played far easier foes since then, beating Rhode Island 45-24 Saturday after thumping Western Michigan.

For this Saturday, BetMGM makes Pitt a 22.5-point favorite. It’s hard for a Panther backer to make a big profit off the moneyline, which stands at -2000. The over/under is set at 48.5.

Pitt was happy last week to get back starting quarterback Kedon Slovis from an injury he suffered in the first half against Tennessee. He had a rather quiet day against Rhode Island, though, completing 20 of 27 passes for 189 yards, while letting the running backs do the hard work, piling up 271 yards on 41 carries. That was primarily due to the ACC’s leading rusher, Israel Abanikanda, galloping for 177 yards and four TDs.

Against UCF, Georgia Tech led 7-3 at one point but could not reach the end zone afterward in a 27-10 loss. Despite the lack of scoring, quarterback Jeff Sims completed 21 of 32 passes for 314 yards. Defensively, however, the Yellow Jackets gave up 284 rushing yards on 56 carries, which might have Abanikanda salivating.

One of the few highlights of the Owls’ 2021 season was a 34-31 upset of Memphis in Philadelphia, but they are deemed unlikely to pull that off in Memphis in an early game starting at noon.

While Temple is 2-2, the two wins have come against lower-caliber opponents in Lafayette and Massachusetts. The latter was a 28-0 win last Saturday that marked the Owls’ first shutout victory since 2016.

Memphis is 3-1, with a 44-34 win over North Texas State last week following victories against Navy and Arkansas State. The Tigers’ lone loss was 49-23 in their opener vs. Mississippi State.

BetMGM makes Temple an 18.5-point underdog, with one of their believers able to get +650 on the moneyline. The over/under is 50.5.

The Owls’ big news last week was a shift at starting quarterback to E.J. Warner (son of Kurt). He completed just half of his passes, with two touchdowns and two interceptions.

Temple is among the nation’s lowest-scoring teams (18 points per game) and stingiest in giving up points (15 ), but the latter stat will be tested against Memphis and its quarterback, Seth Henigan, as the Tigers have averaged 37 points per game.