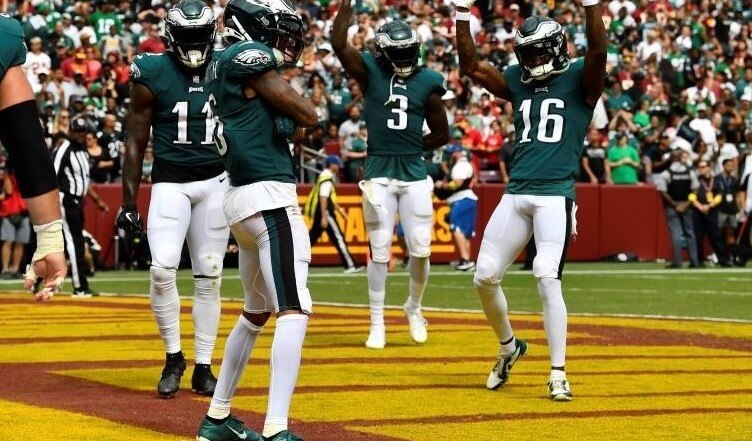 The Eagles and Steelers are both favored in their home games at 1 p.m. Sunday, and Pennsylvanians who haven’t yet wagered online with BetMGM have an attractive offer to get in on the betting action.

BetMGM, which is among the most popular online sportsbooks for bettors each month in the state and nationally, essentially is offering insurance for an initial wager of up to $1,000. It is labeled as a “risk-free” bet that returns free betting credits to the customer if they lose, in an amount equal to the size of their losing wager.

Pennsylvanians who have not previously registered a BetMGM account are eligible for the “risk-free” welcome offer. Any new customer can use the BetMGM bonus code PENNBETS to obtain the offer on the sportsbook’s site.

After making a deposit and placing a wager for anywhere between $10 and $1,000 on Sunday’s NFL slate or other options, the player can sit back and enjoy the winnings if the bet succeeds, with no need for the welcome offer’s reward. But if the bet loses, BetMGM will refund the account with equivalent free bet credits that can be used to try to recoup the loss.

If, unfortunately, the first bet loses, the free bet credits matching the amount of the loss will be placed in the customer’s account within 24 hours. Players then have seven days to make use of the free bets.

While the welcome bonus is available currently for any wager, Sunday’s games involving Pennsylvania’s two NFL teams involve plenty of opportunities to take advantage of it.

Congratulations if you made a bet before the season’s start that your Philadelphia Eagles would be the sole NFL team undefeated at the end of September. Not many had such foresight.

And those who thought the Jacksonville Jaguars would be a competitive team this season after years of floundering are also to be commended.

Philadelphia is 3-0 after Sunday’s 24-8 whipping of the Washington Commanders represented the second straight domination of an opponent. Jacksonville looked just as strong in pasting the Los Angeles Chargers 38-10, snapping an 18-game road losing streak to get to 2-1.

Now it will be quite interesting to see how fans at Lincoln Financial Field greet the return of Pederson, the only coach to lead the Eagles to a Super Bowl victory.

Aside from the coaching matchup, there’s an interesting comparison to be made between the two young quarterbacks on the field: Jalen Hurts, who has quickly become an MVP candidate (+700 on BetMGM, behind only Josh Allen, Patrick Mahomes, and Lamar Jackson) and former No. 1 overall draft pick Trevor Lawrence. They each threw three TD passes in Sunday’s games.

The key difference between them is how much more dangerous Hurts can be with his legs. BetMGM offers prop bets on Hurts over/under 249.5 passing yards and 48.5 rushing yards, while posting Lawrence’s numbers at 235.5 and 12.5.

That higher yardage total for the Philly quarterback has a lot to do with his weapons that outnumber Lawrence’s: DeVonta Smith had a career game with eight receptions for 169 yards and a TD against Washington, and A.J. Brown and Dallas Goedert caught TD passes as well.

After Pittsburgh’s meeting with the New York Jets, one of the teams will have a 2-2 record with hopes of defying preseason forecasts and early-season mediocrity and competing for a postseason berth. The loser will be 1-3 and have a hard time staking any such claim.

Both teams lost by double digits last Sunday — the Steelers 29-17 to the Cleveland Browns  and the Jets 27-12 to the Cincinnati Bengals — and there was little positive impression made in either loss.

The difference this week is there’s a quarterback switch in New York, with Zach Wilson returning from preseason injury to take over for Joe Flacco. There’s been a lot of talk about a quarterback switch in Pittsburgh as well, but coach Mike Tomlin has been adamant in sticking with Mitch Trubisky over rookie Kenny Pickett. Fans in Acrisure Stadium can be expected to make their feelings known on the topic quickly if the Steelers offense remains stuck in neutral, where it’s been all season.

BetMGM makes Pittsburgh a 3.5-point favorite at home, the first time it’s been favored all season. The moneyline is set at -185 for the Steelers and +150 for the Jets. The over/under is a modest 41.5.

While the biggest injury affecting the Jets has been addressed with Wilson’s return to practice, the Steelers can’t say the same. Linebacker T. J. Watt, last season’s Defensive Player of the Year, remains out with a torn pec. It has been widely repeated by the local and national media this week in that games Watt has missed during his career, the Steelers are 0-6. A defense that swarmed and demolished the Bengals with Watt’s involvement in Week 1 has been far more tame since then.

Of course, it remains to be seen how effective Wilson can be in his return, as his stats in his rookie season of 2021 weren’t all that stellar (9 TDs, 11 interceptions). For Sunday’s game, BetMGM puts his passing yardage prop at even less than Trubisky’s — 205.5 to 215.5.

If neither quarterback is sharp, if neither offense lights up the scoreboard, if it’s a game that has TV viewers looking to switch channels, no one should be shocked. But for whichever team has an even record by late afternoon, their fans — and likely their bettors — will be plenty happy.