BetMGM's welcome offer applies to all bets, including Eagles to remain undefeated 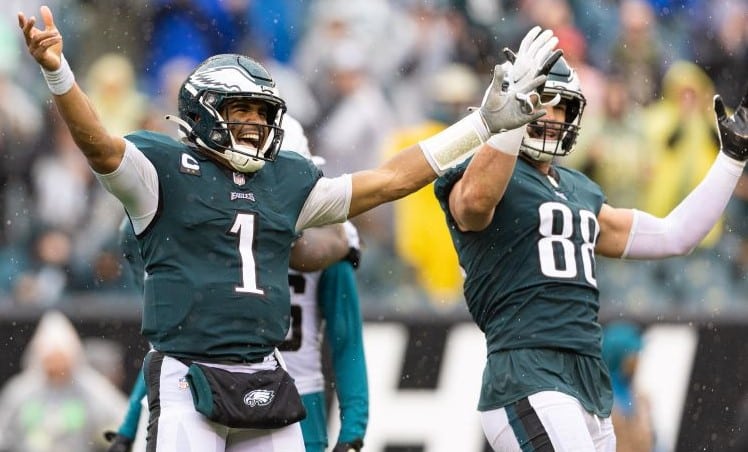 The undefeated Eagles travel to Arizona for Sunday’s game against a team that was in their shoes at this time a year ago, and BetMGM has a generous welcome offer for new customers who want to consider betting on Philadelphia’s momentum continuing.

The Eagles are 5.5-point favorites against the Cardinals, and BetMGM has a “risk-free” first-bet offer that could apply to a wager on that spread or on any other market on the game. (The offer is also available for any other first bet, including the rest of the weekend’s NFL action.)

How the BetMGM PA bonus works

BetMGM, one of the most widely used online sportsbooks in Pennsylvania, uses the risk-free promotion as a form of insurance for any first bet up to $1,000 by a new customer. If that first bet loses, it means free betting credits of an equivalent amount are placed into the customer’s account for another chance at success.

Pennsylvanians who have not previously registered a BetMGM account are eligible for the welcome offer. Any new customer can use the BetMGM bonus code PENNBETS to obtain the offer on the sportsbook’s site.

The user would make a deposit and place a wager for anywhere between $10 and $1,000 on the Eagles, the rest of Sunday’s NFL slate, or any other option. A winning bet, naturally, negates the need to make use of the offer.

Pennsylvania fans of the Steelers might also want to consider using the offer on their team as the biggest underdog it’s been in modern NFL history while traveling to Buffalo. We outline the two games below.

Arizona was 4-0 at this time last year, advanced to 7-0, and then fizzled out in the second half and postseason.

The 4-0 Eagles, the NFL’s only undefeated team, hope to do much better, and BetMGM is among the oddsmakers projecting them to do so. BetMGM has them at +325 to win the NFC, ahead of the Green Bay Packers at +400 and Tampa Bay Buccaneers at +450.

Philadelphia has been good at beating point spreads as well as other teams, including Sunday’s 29-21 win over Jacksonville. In addition to making the Eagles a 5.5-point favorite for Sunday’s 4:25 p.m. start in Arizona, BetMGM has them at -225 on the moneyline, with the Cards at +185. The points total is 49.

It’s currently hard to find fault with a team that has an MVP candidate in Jalen Hurts (+550), a strong running game with Miles Sanders’ revival and Hurts’ scampering, and on defense the NFL lead in sacks (16) and takeaways (10).

Arizona’s quarterback, Kyler Murray, has the same dual threat capabilities as Hurts, but is not considered to have as strong a supporting cast. The Cardinals did limit the Panthers to 220 yards of offense in Sunday’s win, but Carolina’s offense is not nearly as explosive as Philadelphia’s, which is second in the league with 435.5 yards per game.

One of Murray’s targets, interestingly, is tight end Zach Ertz, who is fondly remembered by Eagles fans and was traded away last year after Dallas Goedert supplanted him in Philadelphia. Ertz has 22 catches for 181 yards this year, Goedert 16 for 240. Among its player props Sunday, BetMGM has Ertz at over/under 45.5 receiving yards and Goedert at 44.5.

Things seemingly can’t get much worse than a lowly status as a two-touchdown underdog for 1-3 Pittsburgh, unless we’re writing this again in a few weeks and they’re 1-7 after successive losses at Buffalo, at home against Tampa Bay, and at Miami and Philadelphia.

Sunday’s 24-20 home loss against the mediocre New York Jets was Pittsburgh’s third straight defeat, with the introduction of rookie quarterback Kenny Pickett the only ray of hope radiating from it. Despite three interceptions, which weren’t deemed to be his fault, he sparked the offense with two second-half scoring drives that included his own rushing TDs before the defense couldn’t stop the Jets.

The 3-1 Bills are from the opposite side of the state from the Jets, and they are even farther apart in terms of talent than location. In fact, they remain the Super Bowl favorites at +400 on BetMGM. Last week, they came from behind to beat the Baltimore Ravens 24-20, which is unsurprising in that they have outscored their four opponents 63-7 in the second half.

So in addition to being a 14-point underdog for the 1 p.m. game, Pittsburgh is +600 on the moneyline. While it might sound like throwing money away, it should be noted that the Steelers won 23-16 as a smaller underdog in Buffalo at the start of the 2021 season. The points total for Sunday is set at 45.5.

The Steelers defense came out of the Jets game considerably nicked up, with concerns about the health for Sunday’s game of key starters such as lineman Cam Heyward and safety Minkah Fitzpatrick. And that’s on top of the absence once more of linebacker T.J. Watt, which is particularly notable in that the Steelers are now 0-7 in games he’s missed during his career.