Philly looks to build momentum, while Pittsburgh hopes to get some back 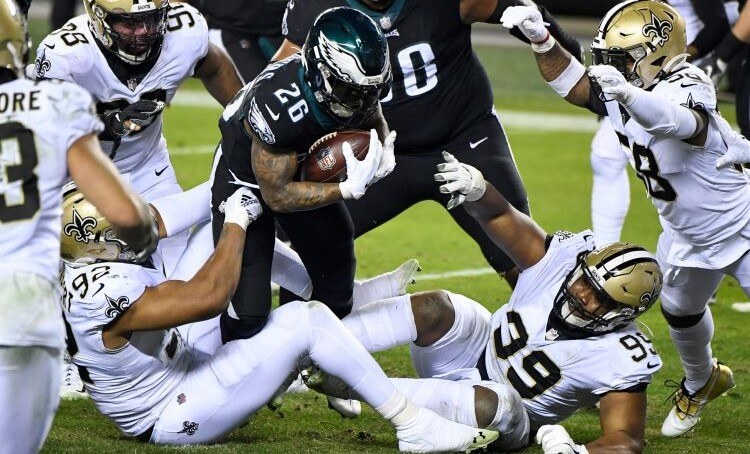 The Eagles got a surprisingly lopsided win over the Broncos in Denver on Sunday and the Steelers got an anytime-surprising tie against the Detroit Lions, making one Pennsylvania team look stronger than presumed and the other weaker.

Now Philadelphia is a small home favorite over the New Orleans Saints Sunday, even though the Eagles have yet to win at Lincoln Financial Field this year, while Pittsburgh is a touchdown or so underdog visiting the Los Angeles Chargers, even though both teams aren’t certain which key players will be absent.

Pennsylvania’s online sportsbooks can be expected to have special odds boosts or other offers relating to the games by Sunday morning, but we can sum up below where the main betting markets stand as of Friday morning.

Which Eagles team will show up?

In a season where unpredictability has run rampant throughout the NFL, the Eagles (4-6) have been as unpredictable as anyone week to week. The one thing they’ve recently made clear, however, is they can run the ball, and they’re a lot better team when they try to do so.

The 30-13 win in Denver was the third straight week in which Philadelphia rushed for at least 175 yards, with Jordan Howard and Boston Scott joining Jalen Hurts on the ground attack. Now there’s also a chance Miles Sanders may be back this week after missing three games with an ankle injury.

The Saints, meanwhile, have suffered from a season-ending injury to starting quarterback Jameis Winston. They fell to 5-5 after Sunday’s 23-21 loss to a strong Tennessee Titans team while using journeyman Trevor Siemian, who will again be at quarterback against the Eagles.

The oddsmakers have generally agreed on Philadelphia as a 2-point favorite, with FOX Bet the lone exception at -2.5 (but with -118 vig). FOX Bet also offers the best price on the Eagles’ moneyline at -125. The points total over/under is a relatively modest 43 to 43.5, and an “over” bettor can get the 43 at Betfred with reduced vig of -105.

That low points total can be explained by how much the Eagles have come to rely on the running game. This week, they face the league’s leading defense against the run, as the Saints have allowed just 72.9 rushing yards per game and 3.1 yards per attempt.

At the same time, New Orleans not only lost its better quarterback, but has doubts over whether key dual-threat running back Alvin Kamara can play after missing last week’s game with a knee injury.

Lots of players up in the air for Steelers-Chargers

The specter of both COVID and injured players hangs over Sunday night’s Steelers-Chargers tilt in Los Angeles.

The Steelers (5-3-1) lost Ben Roethlisberger to the COVID list a week ago, presumably contributing to that 16-16 tie with the Lions. It’s uncertain if the veteran quarterback will be cleared by Sunday. Meanwhile, safety Minkah Fitzpatrick joined him on the COVID list Monday. If star linebacker T.J. Watt is unable to return from an injury sustained against Detroit, the Steelers’ usually staunch defense could be severely lacking.

The Chargers (5-4), meanwhile, have their own pass-rushing specialist, Joey Bosa, on the COVID list along with several defensive teammates, none of whose status for the game was yet certain Friday morning.

Using whatever guesswork involved, the oddsmakers mostly have the Steelers as an underdog by 5.5 (FanDuel, DraftKings, Betway) or 6 (FOX Bet, Betfred, and Kambi-backed sites such as BetRivers, Unibet, and TwinSpires). BetMGM is willing to be an outlier at 6.5 as of Friday morning, however, making it the best site for a Steelers bettor.

BetMGM also has the best moneyline reward on the Steelers at +225. Most sportsbooks have the points total at 47, but FanDuel and FOX Bet dip lower to 46.5.

If Roethlisberger can’t play, the Steelers will again rely on Mason Rudolph, who was a busy but pedestrian 30 of 50 on pass attempts for 242 yards with one TD and one interception versus a weak Lions defense in the rain. The Steelers could be catching the Chargers at the right time, in that their own offense under Justin Herbert has slowed after a terrific start to the season. They’ve lost three of their last four, including 27-20 to the Minnesota Vikings last Sunday, and Herbert was pretty pedestrian himself in that one, completing 20 of 34 passes with one TD and an interception.

With or without Roethlisberger, the Steelers might opt for a steady diet of Najee Harris, as the Chargers have the worst rushing defense in the league and the rookie running back has reached 120 all-purpose yards from scrimmage in four of the last five games.