Oddsmakers like Eagles by a TD, but reeling Steelers are a big underdog vs. Bucs 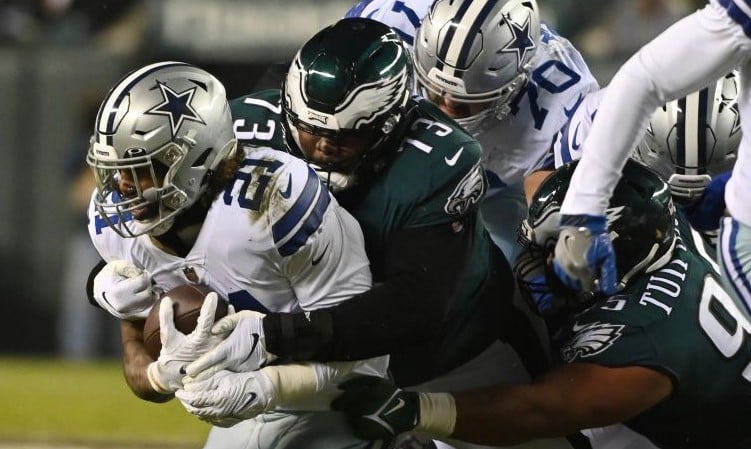 No one’s got a right to scoff about the NFC East anymore, and they should expect an intense, well-played contest Sunday night when the NFL’s only undefeated team meets one that has won four straight since losing its starting quarterback.

The 5-0 Eagles meet the 4-1 Dallas Cowboys before a national prime-time audience in one of the best matchups of the longtime rivals in recent years. The winner will take the lead in a division that is a surprising 15-6 overall this season.

For now, Pennsylvania’s online sportsbooks give Philadelphia a big edge in odds to claim the division title as well as a win in the game itself, but that could change Monday morning if the Eagles fail to contain the Cowboys’ fierce rush.

Earlier Sunday across the state, the reeling Steelers will try to snap a four-game losing streak, but they are a heavy underdog to do so against the Tom Brady-led Tampa Bay Buccaneers.

Contrasting QBs both undefeated this year

In winning every game, the Eagles have scored at least 20 points each time, including last Sunday’s 20-17 victory in Arizona. Dallas has yet to give up 20 points in a game, meanwhile, in putting together a four-game winning streak since opening the season with a loss to the Buccaneers and the loss of Dak Prescott from a thumb injury. Sunday’s win came over the Los Angeles Rams, 22-10.

So something’s gotta give on that 20-20 front at Lincoln Financial Field, and whatever the case, oddsmakers like the Eagles. They were almost universally a 6.5-point favorite Friday morning, although an Eagles backer using PointsBet could take advantage of a 6-point line.

The best moneyline return for a Philly victory was being offered by DraftKings and Betway, at -260. The over/under was generally 42, with FanDuel and FOX Bet a notch higher at 42.5 for those considering a bet on the under.

Neither team was expected to be in this strong a position at this point. No one forecast the Eagles being 5-0 for the first time since 2004, and even the most ardent Cowboys fan’s hopes dimmed considerably at the prospect of Cooper Rush taking over for Prescott starting in Week 2 of the season.

But Rush, the undrafted former Central Michigan quarterback, has made no mistakes running a conservative offense (he threw all of 16 passes Sunday) while becoming the first Cowboys quarterback to win his first five starts, including one last season.

Jalen Hurts, meanwhile, is in the MVP conversation for the way he has led the Eagles offense, including rushing for two TDs last week.

Philadelphia has had the better offense, while both teams’ defenses have been sterling. The Cowboys are second in the league in sacks with 20, led by Defensive Player of the Year favorite Micah Parsons with six. The Eagles’ 11 takeaways are tied for first in the NFL.

It will be up to Philadelphia’s defense to stop Dallas’ one-two running punch of Ezekiel Elliott and Tony Pollard, who combined for 164 yards on 30 carries Sunday. The Eagles offensive line will have to overcome injury issues to find a way to protect Hurts and open holes for him and Miles Sanders, as the Cowboys’ one defensive weakness has been allowing 4.7 yards per carry.

Currently, FanDuel has the Eagles -280 to win the NFC East and the Cowboys at +300, while DraftKings is more heavily skewed in favor of Philadelphia with odds of -330 and +330. Expect those odds to be different Monday, in one direction or another.

Maybe it’s a little odd to say the 38-3 final score in the Steelers’ loss in Buffalo made the game appear closer than it actually was.

But consider that the halftime score was 31-3, and Pittsburgh — a two-touchdown underdog for the first time in its modern history — never scored after a field goal on its opening drive. MVP favorite Josh Allen racked up over 400 yards passing without having to exert himself much, as the Steelers’ pass rush has evaporated without the injured T.J. Watt.

And now the Steelers are a rare 8.5-point home underdog vs. the Bucs at most of the online sites. A Steelers believer could get 9 points Friday morning, however, at either Caesars Sportsbook or at the Wind Creek/Betfred site.

The best Steelers moneyline return for an upset was the +325 from Wind Creek/Betfred or +322 from Rush Street Interactive’s BetRivers and PlaySugarHouse sites. The over/under was generally 45, but an “over” better could go to FanDuel or FOX Bet for 44.5 and an under bettor could use DraftKings or BetWay for 45.5.

There is not much optimism in Pittsburgh these days over a team whose fourth straight loss represented its most lopsided defeat since 1989. In his first start, rookie Kenny Pickett was able to throw for 327 yards, but he had to do so on 52 passes, as the running game has been anemic.

The Steelers secondary continues to have injury concerns, not that Brady appears to need further help after throwing for 351 yards in the win over Atlanta Sunday. The Bucs led that game 21-0 before allowing the Falcons 15 points in the fourth quarter.

At 3-2, Tampa Bay is the only team in the NFC South with a winning record. The Bucs are second in odds behind the Eagles to represent the NFC in the Super Bowl.