Eagles Favored To Rebound While Steelers Try To Sweep Bengals

Philadelphia still commands respect at 8-1, but Pittsburgh's a home underdog 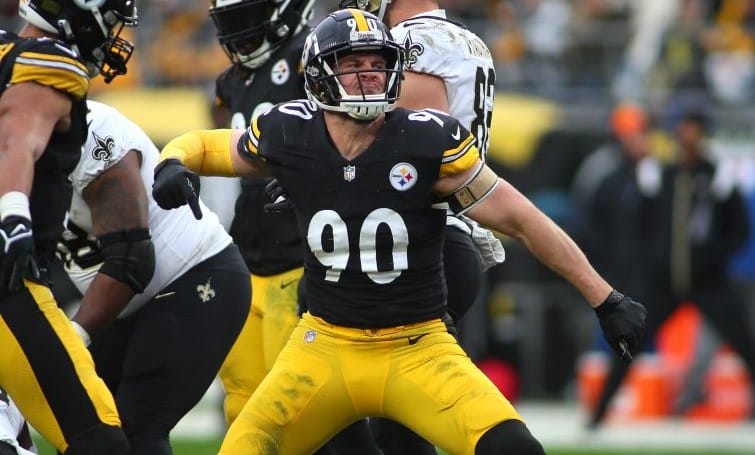 The Eagles set out Sunday to finish the season with eight straight wins just like they started it — and are favored to get that streak started — while the Steelers will try to upset the Cincinnati Bengals for the second time this season.

Philadelphia, now 8-1, lost its first game in surprising fashion when toppled by the Washington Commanders, 32-21, on Monday Night Football. Nonetheless, the online sportsbooks across Pennsylvania have the Eagles favored by a touchdown when visiting the Indianapolis Colts at 1 p.m. Sunday.

Pittsburgh hosts its AFC North rival in a late afternoon game, for which the point spread has tightened during the week. The Bengals were as much as a 5-point favorite as of Monday, but late in the week some sites had the spread down to just 3.5.

Below are some of the best NFL betting options as of Friday morning for the two games for those willing to take advantage of line shopping and use multiple sportsbooks, as most savvy bettors are inclined to do.

It was maybe just a one-game blip

An Eagles team that looked so strong in every department in its first eight games looked a little lost Monday night in giving up four turnovers, lacking its customarily strong running game, and letting the Commanders — who were double-digit underdogs — possess the ball for a full two-thirds of the game.

Every team is allowed a one-game glitch, however, with the sportsbooks still fully backing Philly to not only handle the Colts on the road but win the NFC (+220 as the favorite at FanDuel).

For Sunday, most of the sites have the Eagles as a 7-point favorite, but BetMGM and PointsBet both have reduced lines of 6.5 with a little extra juice at -115 to take Philadelphia. Or as an alternative, Wind Creek/Betfred makes the bet even money (+100) to take the Eagles and give the 7.

The best moneyline return for an Eagles backer is -300, widely available from FanDuel, DraftKings, Betway, BetMGM, and FOX Bet. The over/under is mostly 45.5, with “over” bettors best off Friday morning going to BetMGM as a site using 45.

The Colts (4-5-1) present an interesting and somewhat unpredictable opponent as a team that underwent a much-publicized, somewhat-ridiculed midseason coaching change in replacing Frank Reich with former Colts player Jeff Saturday, who had no NFL coaching experience.

All Indy did in its first game led by the former ESPN analyst was go out and beat the Raiders 25-20 on Sunday in Las Vegas. Saturday (the coach, not the day) reinstalled at quarterback veteran Matt Ryan, who completed 21 of 28 passes for 222 yards and a touchdown.

No matter who’s coaching or quarterbacking, however, the Colts are heavily dependent on running back Jonathan Taylor, who has apparently recovered from injuries that got in the way of his repeating his incredible 2021 season. Against the Raiders, he was back to his old self, running 22 times for 147 yards, including a 66-yard TD.

In all, the Colts ran for 207 yards and gave up only 77 rushing yards to Las Vegas. It was the reverse of sorts of what occurred at Lincoln Financial Field, where the Eagles uncharacteristically ran for only 94 yards while allowing the Commanders 152.

To help prevent a reoccurrence and replenish an injury-riddled defensive line, the Eagles this week signed two veteran defensive tackles who had not been playing this year — Ndamukong Suh and Linval Joseph.

One of the reasons the Eagles signed Linval Joseph, he had 9 tackles against Eagles last year, and they liked what they saw pic.twitter.com/gMfoEDizRr

There was no former star tight end available, however, to replace Dallas Goedert, who will be sidelined for at least several games by a shoulder injury sustained against Washington.

Even with key players out, the oddsmakers see the Eagles as the better team on paper and one with plenty of motivation to prove that Monday’s performance was an outlier.

The Steelers have already beaten the Bengals 23-20 in Cincy this season, but that feels like a long time ago — in more respects than just the two-plus months that have passed.

Since then, Pittsburgh (3-6) has won just two of eight games to threaten coach Mike Tomlin’s record of never having a losing season. Cincinnati (5-4) has won five of eight games and stands a game behind Baltimore in the AFC North race.

The Bengals just had their bye week while the Steelers celebrated the return of linebacker T.J. Watt for the first time since that Cincinnati game by beating the New Orleans Saints, 20-10.

Cincinnati remains perceived as the much stronger team, even while lacking star wide receiver Ja’Marr Chase due to injury. A Steelers backer could get 4 points on the spread Friday morning at various sites, including PointsBet with its reduced vig of -105.

A bet on a Pittsburgh upset could net a healthy return of +175 on the moneyline at PointsBet. The over/under ranged from 40 to 41, with “over” bettors wanting to head to DraftKings or Betway to make use of that 40 number.

It was stout defense that got the Steelers back on track against the Saints last week, with two key interceptions that were reminiscent of how Pittsburgh picked off Joe Burrow four times in the season opener. One of those latter interceptions was a pick-six by Minkah Fitzpatrick, who is a wild card this week in that he missed the Saints game due an emergency appendectomy, yet was back at practice Thursday and could be capable of playing Sunday.

Minkah Fitzpatrick thought he was having “bubble guts” or gas on Saturday.

20 min after telling team docs about the pain, he was on the operating table having his appendix taken out.

Now, he’s back at practice – and his teammates haven’t seen a drop off. https://t.co/Iwi4x8Kvje

The Steelers will presumably also be trying to repeat the performance of their rushing game, which had a season-high 217 yarsd versus New Orleans and took pressure off rookie quarterback Kenny Pickett.

By the same token, Cincinnati dealt with Chase’s absence in its own last game — a 42-21 thrashing of the Carolina Panthers two weeks ago — by handing the ball off regularly to Joe Mixon. It produced a four-touchdown game for him, with 153 yards on 22 carries.

Due to the Steelers’ lackluster season, this is a 4:25 p.m. game that was flexed out of its original scheduling as a prime-time matchup. For bettors as well as Steelers fans, however, there will be plenty of intrigue to make it worth watching.