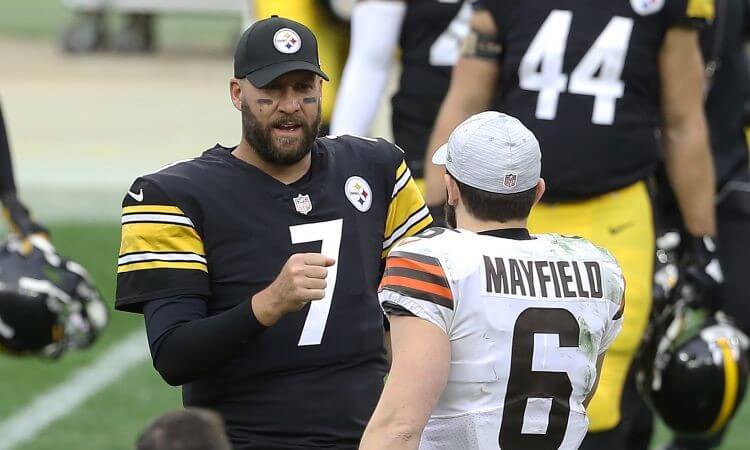 The Steelers and Eagles both head to the Midwest Sunday for games with 3.5-point spreads, and somewhat incongruously, the one of them with the better record is an underdog and the one losing five of its last six is favored.

That, of course, has everything to do with their opponents.

Pittsburgh plays a Cleveland Browns team that is 4-3 and looking like it could be healthier than it’s been in weeks. The Eagles visit the Detroit Lions, who at 0-7 are the only winless team in the NFL.

Pennsylvania’s 13 online sportsbooks see both games as relatively close, with one matchup involving longtime rivals that can’t afford to fall further behind in the AFC North and the other two teams that could feel embarrassed, in either case, by another loss.

The Steelers, at 3-3, are coming off a bye week and, before it, two wins against Denver and Seattle that restored a bit of respectability and hope to a franchise that seemed in danger of spiraling downward.

That win over the Seahawks, however, was tainted by its coming in overtime over injured Russell Wilson’s unacclaimed backup, Geno Smith. Baker Mayfield’s injured shoulder caused him to miss the Browns’ 17-14 win Sunday over the Broncos, putting Case Keenum under center, but Mayfield has practiced this week and been cleared to play.

The Browns rely on a formidable running game regardless, averaging 170.4 yards per game. Though Kareem Hunt will be out Sunday, Nick Chubb (523 yards in five games) is set to return from his injury.

The oddsmakers made the Browns 3.5-point favorites across the board Friday morning, though a Steelers bettor could get an edge with FOX Bet by using its even-money (+100) price to take them. Betfred was the other site using reduced juice, at -105.

Betfred also joined Caesars in offering the best moneyline price on the Steelers at +165, with FanDuel close behind at +164. Most sites had the over/under on points at 42, but FanDuel and Betfred nudged it up to 42.5.

As has been typical in Steelers contests this year, that point total betting option is among the lowest in the week’s slate of games, with only the 49ers-Bears game standing lower. While Steelers quarterback Ben Roethlisberger is an impressive 11-2-1 in games played in Cleveland in his long career, the offense he leads has been spotty at best this year.

Roethlisberger being the winningest QB at the Browns’ stadium up until mid 2020 is still one of the funniest stats of all time.

The other AFC squads scoring as few as the Steelers’ 117 points this year have just one win each, a testament to how the team’s defense remains a strength.

While the Browns also trail in the division, as the Ravens and Bengals both have 5-2 records, the game could be the first this year in which wide receivers Jarvis Landry and Odell Beckham Jr. and Chubb all play, along with Mayfield and a fully healthy offensive line.

The 2-5 Eagles against the 0-7 Lions at Ford Field might not a big focus for average football fans Sunday, but the beauty of sports betting is that every game counts equally.

In this case, the sportsbooks unanimously had Philadelphia as a 3.5-point favorite Friday morning. Those astute at line-shopping would see, however, that Befred was offering even money for those betting the Eagles, and DraftKings and Betway both also offered helpful reduced vig at -105.

BetRivers, meanwhile, was offering the best moneyline price for a win by the visitors at -175. The over/under ranged from a low of 47.5 at Caesars to as much as 48.5 at DraftKings, FOX Bet, and Betway.

It would make a big difference to the Eagles, and their bettors, if the offense would click better before the fourth quarter. Continuing a trend, in last week’s 33-22 loss to the Las Vegas Raiders, the Eagles fell behind 30-7 after scoring the game’s first TD. With lack of much interest in the running game – which is unlikely to change with Miles Sanders sidelined by injury — the offense has been almost totally dependent on the performance of Jalen Hurts, who has been inconsistent, to say the least.

If the Lions offense under Jared Goff had been any better, of course, they might have won a game by now. They’ve come close twice, losing by 2 points to both the Ravens and Minnesota Vikings and generally getting credit for playing hard, even while losing 28-19 Sunday to the Los Angeles Rams.

Even as an underdog this week, the Lions would have to think this is one of their better chances for avoiding the ignominy of ending up with the first 0-17 record in NFL history.

Right now, for those seeing that as a possibility, it can be bet at +850 at DraftKings. The Eagles can do their part to get those bettors one step closer.