Eagles Backers Could Be In For A Long Season, But As For Eagles Bettors … 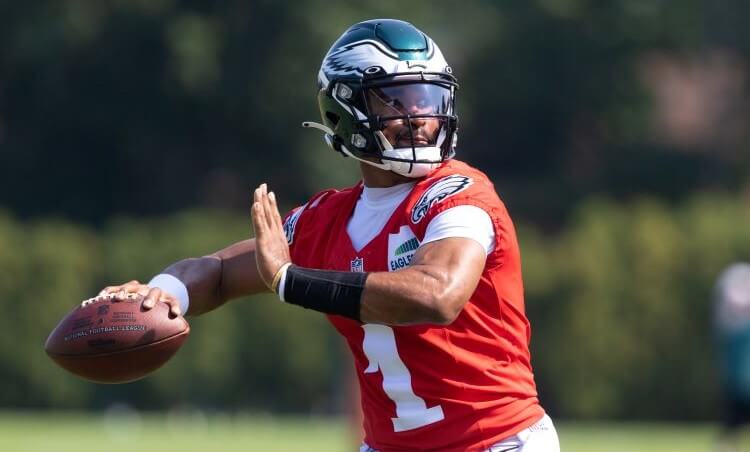 The Philadelphia Eagles begin a new season of football games Thursday night having done everything possible to try to make a woeful 2020 a distant memory, but oddsmakers question just how much better 2021 can be.

A team given the good fortune of the NFL’s easiest schedule (based on last year’s records) is still expected to lose more games than it wins and finish last in the once-again weak NFC East, according to the options posted in the preseason by Pennsylvania’s 13 legal online sportsbooks.

About the only sign of any credit they give the Eagles — and it’s a stretch to say so, given the nature of games in August — is to make them a 1-point or 1.5-point favorite vs. the Steelers in their preseason opener Thursday. The Steelers looked wretched — at least offensively — even while defeating the Dallas Cowboys 16-3 in their own opener last Thursday, though neither Pittsburgh nor Dallas played its No. 1 quarterback for a down.

It’s uncertain just how much new Eagles coach Nick Sirianni will play Jalen Hurts at Lincoln Financial Field, but it could be argued that a second-year QB with just four NFL starts under his belt and a 52% completion percentage in them might need more preparation for the regular season than Ben Roethlisberger or Dak Prescott.

Team has been transformed, but …

It leaves them in rebuilding mode, with odds as long as 100/1 (DraftKings, BetMGM) to win the Super Bowl. In the NFC, only the Detroit Lions are deemed a lesser team, with DraftKings and BetMGM both making the Lions 100/1 to win the conference, while the Eagles are 50/1.

One thing that could alter perceptions of the Eagles’ possibilities is a trade for talented Houston Texans quarterback Deshaun Watson, but there are big ifs hanging over that: whether the Texans will trade Watson, whether he will go to the Eagles if they do, and how much his availability in 2021 may be diminished by any action the NFL takes regarding a host of sexual assault allegations against him.

So at least for now, oft-frustrated Eagles fans have to pin their hopes on Hurts, a dual threat behind center who showed promise in bursts last year but offered no assurance he’s the franchise quarterback of the future.

This year, at least he will have No. 1 draft choice DeVonta Smith — the Heisman Trophy winner out of Alabama — to throw to among a receiving corps that appears otherwise suspect by customary NFL standards. Smith’s season is already off to a shaky start, however, from a knee injury in practice that will sideline him for a couple of weeks.

On a more positive note, the offensive line can’t possibly become more battered by injury than it was last year, and with a strong defensive front returning, there are glimmers of hope to at least improve upon last year’s record in the NFL’s first 17-game season.

Adding everything up, the sportsbooks see the Eagles as a team that should win six or seven games, as the over/under on their season wins total is generally put at 6.5.

The sportsbooks lean toward the “over” on that bet by placing a hefty vig to take it. Caesars as well as DraftKings are offering -140 to take “over 6.5,” which is a better price for Eagles backers than other options such as FanDuel (-150) and BetRivers (-152).

The team is a distinct underdog to make the playoffs, even though the only three opponents with above .500 records from 2020 are the New Orleans Saints, Tampa Bay Buccaneers, and Kansas City Chiefs. FanDuel offers the best return on that scenario for an Eagles believer, by making them +280 to get into the postseason.

And even in an NFC East in which no team had a winning record last year, the Eagles get no respect, universally tagged as belonging in the cellar. The Cowboys are the favorite, followed by the Washington Football Team and New York Giants. The best price to be obtained on Philly’s longshot chance of winning the division is the +550 offered by both DraftKings and Caesars.

Here’s how the division-winning odds line up at several of the major sportsbooks:

Already an underdog for real opener at Atlanta

For this week’s preseason opener involving the two Pennsylvania teams, the Kambi-backed sportsbooks such as BetRivers and Unibet are joined by FOX Bet in making the Eagles a 1.5-point favorite (with a little extra juice involved) while others list a 1-point spread.

An Eagles backer can bet the moneyline at -120 from FanDuel, BetMGM, or Caesars. The low-scoring over-under on total points ranges from 33.5 at BetRivers and Unibet to 34.5 at most other sites.

Opening lines are also posted already for Philadelphia’s first regular season game, on Sept. 12 in Atlanta. The Falcons are generally a 3.5-point favorite for the contest, although Caesars has the Eagles plus-4. DraftKings is offering the best moneyline price to wager on a Philly win, at +175.

And for those willing to invest their money for the duration of the season in some player props, different sites offer different totals relating to several Eagles.

Smith, meanwhile, could be among the Eagles’ and NFL’s most intriguing new players, as he is one of the top eight candidates to be selected Offensive Rookie of the Year. The best payoff on that would be the 17/1 offered by FanDuel, which also sets his o/u on receiving yards at 800.5.