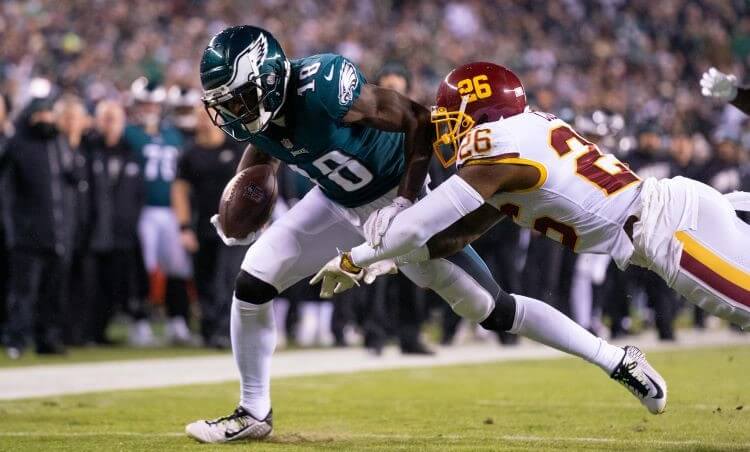 Eagles fans could have been forgiven two months ago, back when the team was 2-5, for turning their thoughts to next year’s NFL draft and happier years ahead from a new pipeline of talent.

But lo and behold, after winning their past three games and five of six, Philadelphia is a heavy favorite to make the postseason as a wild card team. And to further cement that status, the Eagles get a rematch at 1 p.m. Sunday with a reeling Washington Football Team that has dropped three straight, including a 27-17 loss to Philly on Dec. 21.

While WFT still has a smidge of a snowball-in-hell chance — or this year, a snowball-in-Pennsylvania-in-December-chance — of making the playoffs, the Eagles at 8-7 would be the last NFC wild card team included if the season were to end now. They just need to hold off the 7-8 Minnesota Vikings, Atlanta Falcons, and New Orleans Saints in order to retain their position, and Pennsylvania’s online sportsbooks figure they will.

The books that list odds of making the playoffs set them at -250 for the Eagles, with a +200 option to bet they won’t play beyond their Week 17 game hosting the Dallas Cowboys.

Even though Sunday’s game will be on Washington’s home turf, nearly all of the sportsbooks listed the Eagles as 3.5-point favorites Thursday morning. The best option on that number for an Eagles backer was at Caesars, which offered even money instead of the standard -110. As an alternative, outlier Betfred posted just a 3-point spread, but at -120 to take Philadelphia.

The best moneyline option on the Eagles was the -167 offered by Kambi-supplied sportsbooks, including BetRivers, Unibet, and TwinSpires. The over/under was set at 45 by most major sportsbooks, including FanDuel, DraftKings, FOX Bet, and Betway, but an “over” bettor could get better advantage with the 44.5 from BetMGM.

The Eagles were a slightly bigger favorite, with a higher points total, earlier in the week, and the change could have something to do with Philadelphia’s precarious backfield situation. The team’s winning streak has relied on the NFL’s best running game, but Miles Sanders broke his hand Sunday after running for 45 yards in the first half of the 34-10 destruction of the New York Giants. That followed two straight 100-yard-plus performances by Sanders, who is now sidelined.

In addition, No. 2 back Jordan Howard is questionable due to a “stinger” suffered against the Giants, potentially leaving Boston Scott, Kenneth Gainwell, or the just-reacquired Kerryon Johnson to support quarterback Jalen Hurts.

WFT has gone downhill in a hurry

No matter what absences the Eagles may have, their troubles pale compared to those of the WFT, a team that has fallen from 6-6 to 6-9.

Washington’s struggles against Philadelphia just over a week ago could be forgiven, in that the visitors in that contest were ravaged by a COVID-19 outbreak and had to use third-string quarterback Garrett Gilbert, who spent only three days with the team before starting.

But with No. 1 QB Taylor Heinicke back under center last Sunday against the Cowboys, Washington was destroyed 56-14. Heinicke threw an interception on WFT’s first play from scrimmage, and he ended up completing 7 of 22 passes for 121 yards, with one TD and two picks.

Just to make things worse, WFT’s Jonathan Allen and Daron Payne got into a sideline altercation that was a huge embarrassment.

Jonathan Allen and Daron Payne get into in on the sideline. Allen throws a punch. Getting ugly for Washington.pic.twitter.com/pj2Oow0cw1

The only thing that might be more embarrassing, at this point, is if the Eagles somehow miss the playoffs as a result of losing this game.