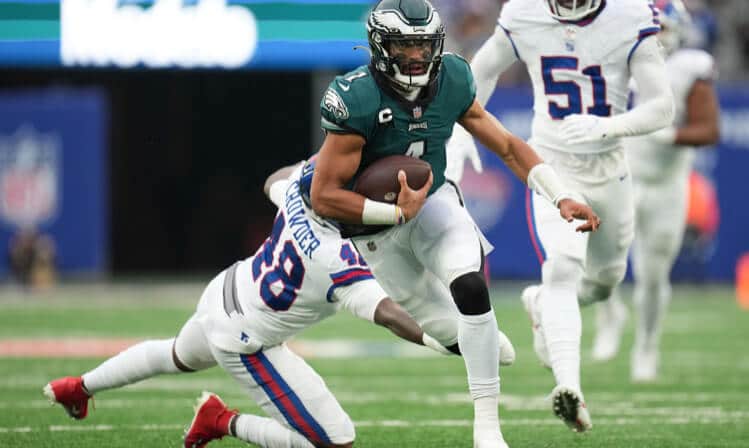 Context is critical. Pennsylvania’s two NFL teams, the Steelers and Eagles, are starting off December with five wins apiece, but expectations and situations leave them in dissimilar positions.

If anything, the Philly squad is exceeding its low expectations coming into the season, when Pennsylvania’s online sportsbooks had the Eagles’ win total set at 6.5 in the 17-game campaign, juiced to the over to varying levels. As for Pittsburgh, the win total was 8.5 games across the board, putting the Steelers slightly behind pace through 11 games.

And the disparity is amplified when you look at their remaining schedules. Based on wins and losses, the Steelers have the second toughest strength of schedule left to go, while the Eagles have the sixth softest.

Even though the Eagles fell another half-game behind the Cowboys on Thursday night and are now an extreme longshot to win the NFC East at prices from +1200 (BetMGM and Caesars PA) to +1700 (FanDuel), that’s better than the Steelers’ chances in the stronger AFC North, where nobody is below .500 and Pittsburgh’s odds range from +2800 (FOX Bet) to +3600 (FanDuel). Also helping the Eagles: The final NFC playoff spot would currently go to a 5-6 team, whereas in the AFC it would go to a 6-5 team.

For both PA teams, though, Sunday’s Week 13 games are close to must-wins.

In facing the 3-8 New York Jets at 1 p.m. right before their bye week, the Eagles are looking at the closest thing they have remaining to a free square. Philly can probably afford just one more loss, and almost certainly can’t afford for it to come against their fellow green-clad, I-95-adjacent team.

And when the Steelers take to Heinz Field at 4:25 p.m., it’s against their division-leading rivals, the Baltimore Ravens. Would the Steelers still be mathematically alive if they lose? Sure. But a remaining gauntlet of Vikings, Titans, Chiefs, Browns, and Ravens again on the road in Week 18 suggests that, realistically, it’s now or never.

Hurts hurting, but it’s Eagles by a touchdown

Despite an ankle injury, Eagles QB Jalen Hurts is expected to start on Sunday. But if his mobility is limited and he’s forced to stay in the pocket, the Jets start to look like a very live ‘dog to make it back-to-back losses for the Birds at MetLife Stadium.

With healthy legs, the Eagles would theoretically be able to run all over the Jets, who rank 26th in the NFL in yards allowed per carry, 27th in rushing yards allowed per game, and dead last in rushing touchdowns allowed. (They also have the NFL’s 29th-ranked passing defense in yards per game, so it’s not like the Iggles’ offense won’t have options.)

Philly’s running back depth chart for Sunday is a bit of a mystery. Miles Sanders is expected to play despite an ankle injury of his own suffered last week against the Giants, while Jordan Howard and Boston Scott both have “questionable” tags. So, despite the premium position-vs.-defense matchup, good luck picking the right rusher to load into DFS lineups.

On the other side of the ball, the story is rookie quarterback Zach Wilson, who returned from injury last Sunday and put up pedestrian numbers (14-24, 145 yards, 0 TD passes, 1 INT) as the Jets snuck past the Houston Texans for their third win of the season. While long-term hopes for Wilson remain high, he’s been distinctly rookie-like all year, throwing at least one interception in six of his seven games.

The Eagles are favored by 7 points at most of PA’s sportsbooks, but can be found at -6.5 with tremendous +100 juice at FOX Bet.

It’s the moneyline, though, that matters to diehard Eagles fans hoping to see this team return to the playoffs, and the best price there is -275 at FOX Bet, BetMGM, and Caesars. If you’re looking to fade the Eagles, DraftKings, FanDuel, and Caesars all offer a +235 moneyline on the Jets.

Nobody is expecting an offensive explosion here. Most sportsbooks, including all those for which Kambi provides the opening odds (BetRivers, Unibet, TwinSpires, etc.), have the point total at 45, while DraftKings (44.5) and FanDuel (45.5) provide the slimmest of line-shopping opportunities.

Big Ben’s back’s against the wall

It’s been a relative rarity in the Mike Tomlin-Ben Roethlisberger era for the Steelers to find themselves underdogs at home — Big Ben is a remarkable 90-31 in his career in his home stadium — but Pittsburgh is indeed getting points against Baltimore this week.

The Ravens are no juggernaut. Despite a glittering 8-3 record, six of those wins have come by six points or fewer, and QB Lamar Jackson wasn’t exactly lighting it up in last week’s 16-10 escape against Cleveland, saying he “looked like a rookie” in throwing a career-high four picks. Thanks to injuries, Baltimore has almost no rushing game to speak of beyond Jackson. The Ravens’ defense isn’t as imposing as it has been in years past either. But they just keep getting it done when you look up at the scoreboard at the end of the game.

Interestingly, the road team is 7-2 against the spread in the last nine meetings between these rivals. Sunday’s line has reflected bettors following that trend, as Baltimore opened -3.5 but has moved at most shops to -4.5. That’s the line everywhere in PA except FOX Bet, the outlier once again with the Ravens -4 at an attractive +100. If you’re looking to bet the Steelers’ side, take +4.5, -106 at FanDuel.

As is the case with the Eagles, though, it’s the moneyline that matters most to Steelers fans, who won’t be satisfied to see their team lose by 3 or 4. FanDuel offers the best return at +184 on a win that would breathe some life into the Steelers’ playoff hopes, while Ravens backers’ best bargain is -200 at DraftKings and BetMGM.

And just like Eagles-Jets, the offenses are expected to struggle at Heinz Field. The over-under is 44 across the board, with Betfred’s -105 juice in both directions offering the best bang for the buck, whichever side you choose.