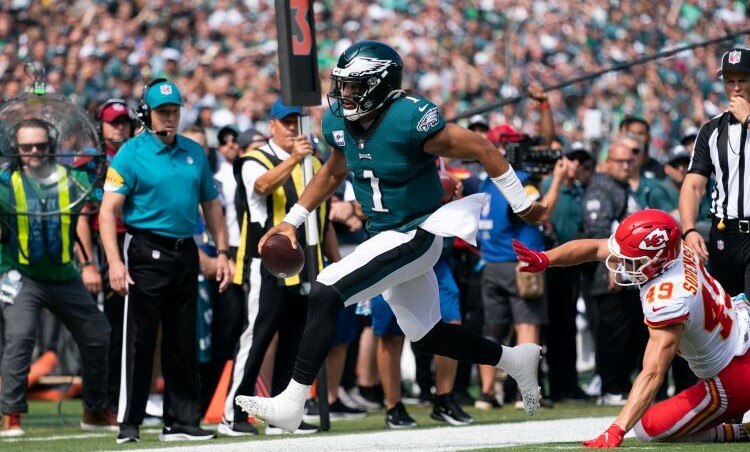 Dark times have befallen Pennsylvania’s NFL teams and their betting backers, but both the Eagles and Steelers on Sunday face opponents coming off their own bad losses.

The difference for the Carolina Panthers, who host the Eagles, and Denver Broncos, who visit Heinz Field, is those two teams were losing for the first time this year while neither Philadelphia nor Pittsburgh has won since Week 1.

Neither the Panthers nor Broncos have beaten a team with a winning record, however, and their soft schedules are contributing to close point spreads from the state’s online sportsbooks for the Pennsylvania teams’ games Sunday.

Philadelphia is an underdog by a field goal in Charlotte. Pittsburgh is either favored by a point, or an underdog by a half-point, or even just a we-throw-up-our-hands-just-pick-one even money from the sportsbooks, which are apparently unsettled by the uncertainty over Broncos quarterback Teddy Bridgewater’s status.

In any case, we explain below the odds posted as of Friday morning, emphasizing those of most interest to a backer of one or both of the state’s teams (no matter how hard the “Steagles” are making it to hold that status as a fan in 2021).

Hurts has been impressive, but so has Darnold

Jalen Hurts was on fire Sunday vs. the Kansas City Chiefs, posting 387 passing yards and an additional 47 rushing as the Eagles amassed an impressive 30 points. The only problem was Patrick Mahomes and the Chiefs scored 42.

And now the Eagles play a Panthers squad that has revived the young career of Sam Darnold, the NFL’s only QB to throw for 300-plus yards in each of his last three games. On top of that, he has five rushing TDs, which is somehow four more than Hurts.

The Panthers lost 36-28 Sunday in Dallas to the Cowboys, though, in their first big test after feasting on the New York Jets, New Orleans Saints, and Houston Texans.

The oddsmakers thus size up the Eagles and Panthers pretty evenly, given Carolina’s home field advantage. The various sportsbooks all have Carolina favored by 3, with a slight edge going to use of Betfred or Betway for an Eagles backer due to their reduced juice of -105.

The best moneyline offering on the Eagles is the +150 listed by DraftKings, BetMGM, and Betway. The over/under on points is from 44 to 45, with DraftKings, FOX Bet, and Betway all using the lower number.

One piece of information that would interest bettors — although evidently they won’t get it until game time — is whether all-purpose running back star Christian McCaffrey will return for the Panthers after missing the Cowboys game with a hamstring injury. He said this week that he is hopeful, and he would presumably be a big upgrade over Chuba Hubbard, especially against an Eagles defense that has allowed 150.3 rushing yards per game. On Friday afternoon, however, McCaffrey was given the “doubtful” designation.

The Panthers’ own defense has been a strength for them, second in the league in passing yards allowed (156.5) and first in sacks, but Hurts, like Dak Prescott last week, could give Carolina a bigger challenge than in its first three games.

Further bolstering the hopes of Eagles fans is Hurts and rookie wideout DeVonta Smith made their best connections of the year Sunday, with Smith going over 100 yards receiving for the first time on his seven receptions. If that was just the start of a combination with a lot of potential, Eagles bettors might be very happy by late afternoon Sunday.

Bridgewater: Will he or won’t he?

Even if they weren’t expected to beat the Green Bay Packers at Lambeau Field — and, of course, they didn’t — there’s little positive to say about the Steelers after three straight uninspired losses.

The biggest thing in their favor, at least from the standpoint of oddsmakers posting a nearly even line on their meeting with the Broncos, is the question of whether Denver signal-caller Bridgewater will be cleared from concussion protocol and able to play. He did practice Thursday.

Even with bad statistics in Sunday’s 23-7 loss to the Baltimore Ravens before he had to leave with a head injury, Bridgewater has completed 72% of his passes this year with five touchdowns and no interceptions.

Just to pick some random quarterback for comparison like, oh, let’s say Ben Roethlisberger, that 39-year-old veteran has completed 64% of his passes with four picks to match his four TDs. And he’s looked worse than the stats indicate, dumping off mostly only short passes while suffering from a hip injury that is now pegged as the source of his immobility.

Even with Big Ben’s troubles, many of the sportsbooks (FanDuel, DraftKings, BetMGM, Betfred, Betway) make the Steelers a 1-point favorite. But for a Steelers bettor, the place to go is one of the many books using Kambi-supplied odds (BetRivers, Unibet, PlaySugarHouse, Parx, Barstool, TwinSpires), as they were listing Pittsburgh as a half-point underdog Friday morning. (Caesars is the one site that has the game pick’em.)

The best moneyline value for a Steelers bet is offered by Betfred, at -105.

The over/under is interesting, meanwhile, in that the most common number of 39.5 is matched in low-scoring expectations Sunday only by the Patriots-Texans contest.

This is what happens when a Steelers offense that has been inept encounters a Broncos defense that has been giving up just 12.3 points per game. Assessments of the Denver offense suffer, meanwhile, if it has to rely instead of Bridgewater on Drew Lock, who was just 12 of 21 passing for 113 yards and an interception when filling in Sunday.