Penn State and Pitt are also favored this weekend, with Steelers joining Temple as an underdog 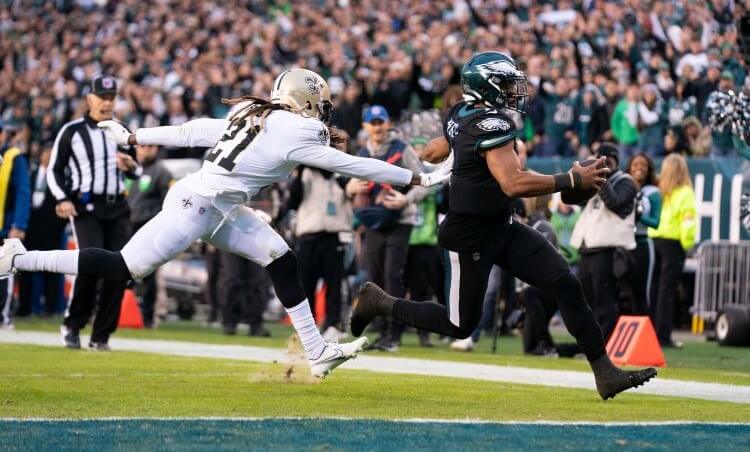 While Pennsylvania football fans and bettors will have no shortage of opportunities to watch pro and college games Thursday and Friday, all of the state’s teams will be on their normal weekend schedules.

The Eagles and Steelers both have division rivalry games on the road Sunday — against the New York Giants and Cincinnati Bengals, respectively — with Philadelphia favored by about a field goal and Pittsburgh a slightly bigger underdog.

The college programs wrap up their regular seasons the day before. The highlight is a Penn State visit to Michigan State in a nationally televised contest on ABC, with the Nittany Lions a small favorite to help coach James Franklin celebrate his new 10-year contract.

Having already clinched a trip to Charlotte, N.C., for the ACC title game the following week, Pitt is a heavy favorite to continue its winning ways at Syracuse Saturday night. Temple, meanwhile, is again a huge dog, this time at home to Navy.

The resurgent Eagles (5-6) have won three of their last four, including an impressive 40-29 defeat of the New Orleans Saints Sunday, to get themselves back into the wild card picture in the NFC.

They face a Giants team (3-7) that couldn’t have looked worse in a 30-10 loss Monday night to the Tampa Bay Buccaneers and fired offensive coordinator Jason Garrett the next day.

Pennsylvania’s online sportsbooks, seeing two teams going in different directions, made the Eagles almost universally a 3.5-point road favorite as of Wednesday morning. Two exceptions were FOX Bet, offering the Eagles -4 at even money, and Betfred, where you could give just 3 points but pay hefty -125 vig for that privilege.

The best moneyline price offered was the -174 from FanDuel. The points total over/under was 45.5 or 46, with DraftKings, FOX Bet, Caesars, and Betway offering the lower number to the benefit of “over” bettors.

The Eagles’ winning ways have coincided with an emphasis on the running game, which amassed 242 yards versus the Saints, including the return from injury of Miles Sanders to run for 94 yards on 16 carries. Jalen Hurts, meanwhile, rushed for three touchdowns to go with his 69 yards.

The Giants are notoriously weak against the run, don’t score many points themselves (18.9 per game, 25th in the league), and represent the start of an easier portion of the Eagles schedule that could enable a postseason appearance.

Every team in the AFC North is over .500, and the Steelers (5-4-1) have the toughest schedule ahead of all of them, with no opponent under .500. They’re coming off an exciting but ultimately unsuccessful 41-37 loss to the Los Angeles Chargers in a game where they missed three key defensive starters.

While the Steelers expect to have T.J. Watt, Minkah Fitzpatrick, and Joe Haden back in the lineup, the sportsbooks still see the Bengals lining up better. Everyone had Pittsburgh as a 4.5-point underdog Wednesday morning.

Caesars was offering the best moneyline return for a Steelers victory, at +185. The over/under ranged from 44.5 at DraftKings to 45.5 at BetRivers, Unibet, TwinSpires, and other sites using Kambi odds.

The game features two of the star offensive rookies in the league in Steelers running back Najee Harris and Bengals wide receiver Ja’Marr Chase, who caught two TD passes in the game at Heinz Field.

Chase’s production has slowed in recent weeks, however. Bengals quarterback Joe Burrow was just 20 of 29 for 148 yards in the win over the Raiders, as Cincinnati leaned on Joe Mixon, who ran for 123 yards on 30 carries.

PSU trying to finish on a high note

The all-time series between the schools is tied 17-17-1, and the Nittany Lions have turned early this week from mostly a small underdog in the game to mostly a small favorite.

Caesars had them as the smallest favorite Wednesday, at -1, while DraftKings, FOX Bet, Betway, and the Kambi sites went up to -2. The best moneyline return for a Penn State backer was the -115 from BetMGM.

Penn State is coming off a defensively imposing 28-0 win over Rutgers despite missing 21 players with flu-like symptoms. Sean Clifford started at quarterback but, due to injury or illness or both, was replaced early by freshman Christian Veilleux, who impressed by throwing for three TDs in his first action. Clifford will likely be back to start Saturday.

Penn State’s tough defense against the run faces a tough adversary in the Spartans’ Kenneth Walker III, who has run for 1,498 yards and 17 touchdowns but was held in check by Ohio State and also troubled by an injury.

Pitt looks for fourth straight win ahead of postseason

Pitt (9-2, 6-1) has already had its best season in many years, but it pines for much more, including a closing win over Syracuse, an ACC championship, and a prestigious bowl berth.

The Orange (5-6, 2-5) are hoping for an upset in the Carrier Dome Saturday night to make themselves bowl eligible after two lopsided losses in a row — to North Carolina State (41-17) last Saturday and Louisville (41-3) before that.

Pitt has won three straight, including a vital 48-38 win over Virginia, and the sportsbooks have the Panthers favored by at least 13 points. That’s the number posted by DraftKings, BetMGM, Caesars, Betway, and Kambi sites.

The best moneyline reward for a Panthers victory is the -500 posted by BetMGM, FOX Bet, and Caesars. The over/under is 58 (BetMGM, FOX Bet, Caesars, Betfred) or 58.5 elsewhere.

Though out of the running for the Heisman Trophy, Kenny Pickett continued rolling up big numbers against Virginia with 340 yards passing and 4 TDs, helping Pitt maintain an ACC-best 43.9 points per game.

Pitt is also best in the ACC against the run defensively, and the running game is what Syracuse leans on, with running back Sean Tucker compiling 1,467 yards on 6.3 yards per carry.

Temple hoping to win back respect in finale

Even facing a Navy team (2-8, 2-5) with one fewer victory, the Owls are a big underdog with the sportsbooks. The closest mid-week point spread was the 12 points listed by Betfred, with other sites using 12.5 except FOX Bet, at 13.

The best moneyline return for a Temple upset was with FanDuel, at +440. The lowest over/under was the 43 from Betfred, and FOX Bet was highest at 44.

Temple has had trouble defending the run, and Navy shuns the passing game for a triple option offense that averages 229.8 yards per game. The Midshipmen lost to East Carolina last week 38-35.