Eagles In Better Position Than Steelers For Late Playoff Push

Philadelphia a big favorite over the Giants, while Pittsburgh faces long odds in K.C. 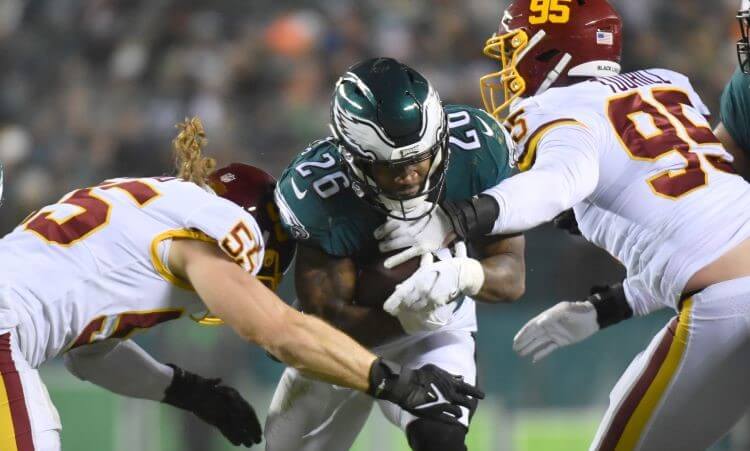 The Eagles and Steelers are in similar positions in one sense: With three games remaining, they’d both barely miss the playoffs with their ho-hum records if the NFL season were to end today.

But this Sunday’s schedule sets up far differently for the two teams, with Pennsylvania’s online sportsbooks favoring Philadelphia by more than a touchdown over the visiting New York Giants and Pittsburgh an underdog by that much while visiting the Kansas City Chiefs. Those were the odds posted as of Thursday morning, at least, and the one thing clear near the end of 2021 is much can change in the course of a couple of days due to COVID-19 outbreaks.

The Eagles on Tuesday benefited greatly from playing a Washington Football Team that had to use a third-string quarterback, and now the Steelers have a chance to play a Chiefs team missing its two star pass-catchers — Tyreek Hill and Travis Kelce — if the pair can’t clear COVID protocols by Sunday. Kansas City is already certain to be without its regular kicker due to the virus.

Any serious sports bettor would be wise to spend part of their Christmas holiday paying close attention to medical reports and line shifts, but we describe below where things stood three days before games that have serious playoff implications for both Pennsylvania teams.

Eagles seem destined to get revenge

The Eagles (7-7) beat the Washington Football Team 27-17 in a game delayed two days by a COVID outbreak that decimated the visiting team’s roster. The biggest COVID issue with Philadelphia this week is not any player but head coach Nick Sirianni, who tested positive Wednesday and might have to yield game day decision-making to pass coordinator Kevin Patullo.

Now the Eagles get to play a Giants team that is missing No. 1 quarterback Daniel Jones, who suffered a season-ending neck injury when New York beat the Eagles 13-7 on Nov. 28. That was the last game won by the Giants (4-10), who lost Sunday to the Dallas Cowboys, 21-6.

The sportsbooks favor Philadelphia to get revenge, with the home team favored by as many as 10.5 points by Betfred. An Eagles backer would be better off with one of three sites using a 9.5-point spread Thursday morning: FanDuel, FOX Bet, or Caesars.

FanDuel was also offering the best moneyline return on the Eagles at -430. The over/under was set at 40.5 across the board.

That relatively low points total reflects the Giants being the lowest-scoring team in the NFC, averaging 17 per game, while throwing in the fact that they’ve performed even worse under backup quarterback Mike Glennon. He’s thrown seven interceptions the past three games with just three TD passes, and may be benched in favor of untested Jake Fromm, a 2020 fifth-round draft pick who relieved Glennon against the Cowboys.

The Eagles, meanwhile, have run for at least 175 yards in seven straight games for the first time in their history. Mile Sanders had a career-best 131 as part of the team’s 238 yards on the ground against Washington, and Jalen Hurts added 296 passing yards as part of the team’s 519 total. Everything seems to set up well for the Eagles at Lincoln Financial Field, so long as there’s nothing like the three interceptions Hurts threw against the Giants last month.

Philadelphia sits just behind the Minnesota Vikings (also 7-7) in current positioning to become the NFC’s third wild card team. The Eagles can be bet at +138 to make the playoffs at BetRivers, Unibet, TwinSpires and other sites using Kambi odds, with -175 offered for a bet on them missing the playoffs.

The Steelers (7-6-1) somewhat miraculously remained in the AFC playoff hunt last Sunday by beating the Tennessee Titans 19-13 despite totaling just 168 yards of offense, which was less than they gave up to Tennessee in rushing yardage alone.

The oddsmakers don’t figure the Chiefs will turn the ball over to Pittsburgh’s defense four times the way the Titans did. Kansas City (10-4) is, after all, on a seven-game win streak that has made the team the favorite to win the AFC, just as it was before stumbling a bit at season’s start.

Most of the sportsbooks listed the Steelers as a 7.5-point underdog Thursday, though their backers could get 8 from BetRivers. The line had been some 2 points wider early in the week, before the Chiefs emerged with more than 10 players on the COVID list, including playmakers Hill and Kelce.

The best moneyline return offered for a Steelers upset was the +300 from either FanDuel or BetMGM. The over/under was set at either 44 (DraftKings, FOX Bet, Betway) or 44.5 (FanDuel, BetMGM, Kambi sites).

If Hill and Kelce can’t be activated by Sunday, the Chiefs might figure to make more use of running backs Clyde Edwards-Helaire and Darrel Williams, considering how porous the Steelers have been against the run. As it is, Kansas City is already averaging 4.5 rushing yards per carry, compared to the Steelers’ 3.6 per attempt. Last Sunday, Najee Harris managed just 18 yards rushing on 12 carries against the Titans while swarmed every time he touched the ball.

Though the Steelers are on the outside looking in in the playoff hunt, they are just a half-game behind the Cincinnati Bengals and Baltimore Ravens in the AFC North, and they finish the season visiting the Ravens after playing the Cleveland Browns in a Monday night contest. A Steelers backer could get +400 on them to make the playoffs from either FanDuel or FOX Bet, and +800 to win the AFC North from BetMGM or FOX Bet.

After another impressive performance against Tennessee, linebacker T.J. Watt has reemerged as the favorite to win Defensive Player of the Year. The best return for a bet on him now would be +200 from BetMGM or FOX Bet, which both list Dallas Cowboys rookie linebacker Micah Parsons just behind him.