Miracle Of Miracles, Both Eagles And Steelers Are In Playoff Games Sunday, But … 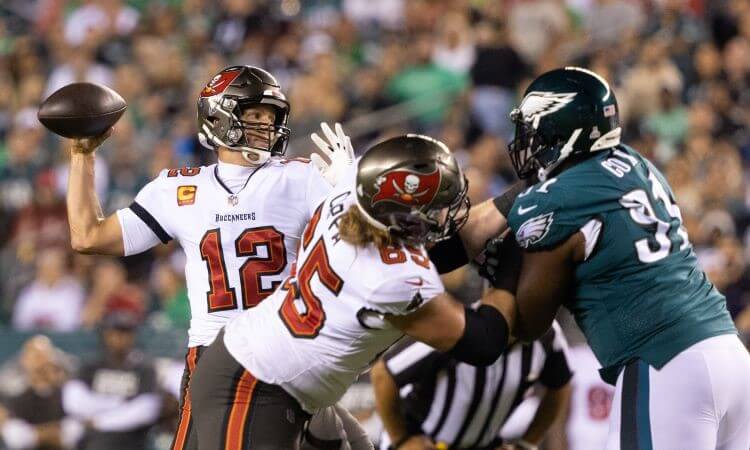 Bettors who believed in the Steelers and Eagles early in the season could have made a big profit on their playoff chances back when both were under .500.

Now, improbably, both of the Pennsylvania teams are in the postseason and there’s a chance to make beaucoup bucks off them again, for those who believe they could win a Super Bowl or conference title. Or even just win as big underdogs Sunday as wild card entrants.

The online sportsbooks are laying heavy odds against both Philadelphia and Pittsburgh on the road as the No. 7 seeds in their conferences, playing against last year’s Super Bowl opponents. The Eagles visit Tom Brady’s Tampa Bay Buccaneers at 1 p.m. Sunday and the Steelers visit Patrick Mahomes’ Kansas City Chiefs at 8:15 that night.

As evidence of how challenging those games are, not that any proof is needed for any average football fan, the Bucs already thumped the Eagles and Chiefs pasted the Steelers during the regular season. Tampa Bay’s win was only 28-22, but that end result disguises how the Bucs ran out to a 28-7 lead. The Chiefs’ 36-10 win was as lopsided as it appears, if not more so.

But who can blame the Eagles and Steelers and their fans for being ecstatic to even have this chance for revenge? Pittsburgh only made it in by an incredible combination of circumstances Sunday — both within and without their control — culminating with a field goal as time expired in overtime for the Las Vegas Raiders to knock the Los Angeles Chargers out of the playoffs.

We’ll run down the early odds on the Cinderella Pennsylvania teams’ prospects here, but check back later in the week for updates.

Eagles to find out if rest helps

The Eagles (9-8) rested most of their key starters — at least the ones who weren’t already sidelined by COVID-19 protocols — in a 51-26 loss to the Dallas Cowboys Saturday. Philadelphia had already clinched its playoff berth, so coach Nick Sirianni figured sitting Jalen Hurts and others was the best strategy, while Dallas played most of the stars it had available, including Dak Prescott.

The hope is that a healthier, better-rested lineup will benefit the Eagles against a Buccaneers team (13-4) that has lost some of its key players in recent weeks. Those include injured wide receiver Chris Godwin and troubled wide receiver Antonio Brown, and the return from injury is uncertain for running back Leonard Fournette, who rushed for two TDs against the Eagles Oct. 15.

The oddsmakers seemed unfazed Sunday night about any holes in the Bucs’ lineup by opening them as an early favorite of at least 7.5 points, then shifting the point spread even wider within hours. After midnight, FOX Bet listed the Eagles as 9.5-point underdogs, while DraftKings, Betway, and the sites using Kambi-provided odds (BetRivers, Unibet, TwinSpires, and others) posted a 9-point spread.

The best moneyline return for the Eagles was the +330 from the Kambi sites. The points total over/under ranged from 48.5 at DraftKings and Betway to 49.5 at BetMGM, FOX Bet, and the Kambi sites.

The big difference for the Eagles from that Week 6 contest at Lincoln Financial Field, which made them 2-4 at the time, is how they converted themselves into the best rushing attack in the NFL. It’s unclear if Miles Sanders can return from injury to play Sunday, but the running game has been plenty strong without him as well.

In that first game, Brady completed 34 of 42 passes for 297 yards and two TDs, and he hasn’t slowed down since, having led the NFL in passing yards and having never heard of Father Time.

The Eagles will have to overcome a lot more than just the Brady magic, however, to claim a Super Bowl or NFC title. BetMGM is offering odds of 66/1 for them to claim another Lombardi Trophy, and FanDuel offers the best payoff at 28/1 for a conference championship.

Speaking of old quarterbacks who’ve won a helluva lot of football games in this millennium, there’s the Steelers’ Ben Roethlisberger.

He led Pittsburgh (9-7-1) to a 16-13 overtime win over the Baltimore Ravens Sunday, resulting in an incredible parlay with the Jacksonville Jaguars’ upset of the Indianapolis Colts, who would have bumped Pittsburgh out if they won. Not only that, when the Raiders-Chargers game sat tied near the end of overtime, it created a scenario for the Steelers to get left out if neither of those AFC West teams beat the other. Only a 47-yard field goal on the game’s final play opened the door for the Steelers.

A bettor last week could have gotten paid off at 16/1 for gambling on chances of everything lining up for the Steelers to make the playoffs.

So the reward is one more unexpected game of Roethlisberger’s 18-year career, in the same Arrowhead Stadium where the Steelers were demolished the day after Christmas.

The Steelers should be able to keep it closer than 26 points this time, but the sportsbooks don’t like their chances overall — in fact they figure the game will be just about half as close.

Just after midnight, BetMGM had the Chiefs as a 13.5-point favorite, with DraftKings and Betway at 13 and FanDuel and Kambi sites at 12.5. FanDuel was the best moneyline option on the Steelers at +500. The over/under was generally 47.5, with FanDuel just 47.

The Chiefs (12-5) finished the regular season Saturday by beating the Denver Broncos 28-24. They won nine of their last 10 games, with the lone exception a 34-31 loss to the Cincinnati Bengals on Jan. 2.

Kansas City pounded Pittsburgh in that first meeting despite missing numerous players due to COVID, including star tight end Travis Kelce. Mahomes shrugged off the absences, completing 23 of 30 passes for 258 yards and 3 touchdowns before easing up with a big lead.

For chances of Pittsburgh doing better against him and several more teams afterward, FanDuel offers 90/1 for a Steelers Super Bowl victory, and most sites list 25/1 for an AFC title.