Eagles And Steelers Are Similar Underdogs With Dissimilar Playoff Prospects

Both teams are getting about 4.5 points against rival Cowboys and Ravens 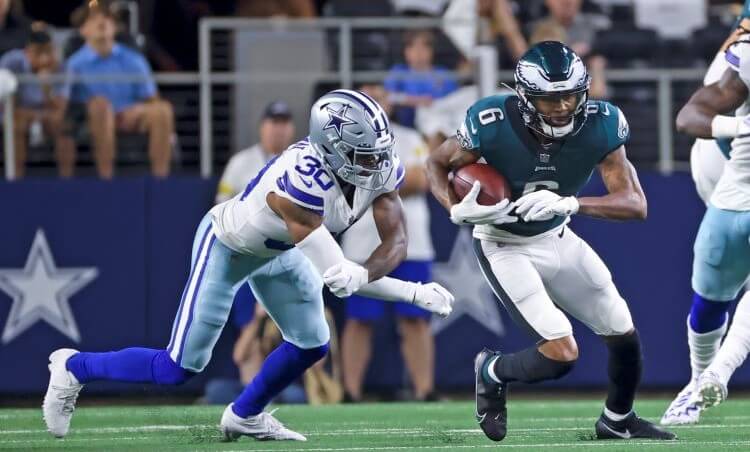 The Eagles and Steelers enter the final weekend of the NFL season facing very different scenarios but for one exception: They’re both underdogs by about 4.5 points.

Philadelphia, which clinched an NFL wild card spot last Sunday, hosts the Dallas Cowboys Saturday night in a game that matters only in terms of playoff seeding. Pittsburgh, meanwhile, retains longshot hopes of sneaking in as the final AFC wild card team, but it is not favored to win in Baltimore in what is likely to be quarterback Ben Roethlisberger’s final game.

This moment after the game between Ben Roethlisberger and his family 🥺 pic.twitter.com/wMYYrDKu0B

The handicapping of the contests, both by recreational bettors and the oddsmakers for Pennsylvania’s online sportsbooks, is even more difficult than usual. On top of the COVID-19 player absence concerns that fall on top of the usual late-season injury issues, there’s also the question in the Eagles-Cowboys contest of which starters might be rested, since the outcome is crucial to neither team.

The coaches haven’t helped matters much, refraining to specify who’s playing and who isn’t, so picking sides this week is a true gamble — but when has that ever deterred a devoted NFL bettor?

Many unknowns as Eagles try to extend streak

The Cowboys (11-5) beat the Eagles (9-7) by 20 points way back in September, when thoughts of a postseason game for Philadelphia seemed as likely as Ben Simmons ever being applauded again by 76ers fans.

Lo and behold, the Eagles locked up their wild card status with a 20-16 win at Washington Sunday — their fourth straight victory and fifth out of six. They have a chance of moving up from the No. 7 seed to No. 6 with a win over Dallas.

The Cowboys lost to the Arizona Cardinals Sunday, 25-22, dropping them to the No. 4 seed, though unlikely events could move them as high as No. 2 with a win over the Eagles.

Philadelphia will again be missing Miles Sanders due to injury. Less certain is the status of 12 players who went on the reserve/COVID list Monday, including notables such as Fletcher Cox, Jason Kelce, Dallas Goedert, Jordan Howard, and Boston Scott.

Washington, Saints, Vikings were contending with Eagles for a playoff spot. Their COVID issues came at a bad time. Eagles outbreak came after they clinched a playoff spot https://t.co/98tk6Ky2iz

Coach Nick Sirianni hasn’t indicated whether he will rest Jalen Hurts to give the quarterback’s ankle some time to improve. Meanwhile, the Cowboys have defensive star Micah Parsons on the COVID list and questions surrounding whether key players such as running back Ezekiel Elliott will be rested heading into the postseason.

Putting all that into their stew on Friday morning, just about every oddsmaker made Philadelphia a 4.5-point underdog for the 8:15 p.m. Saturday game at Lincoln Financial Field. The exceptions were DraftKings and Betway, offering 5 points to Eagles backers.

Fans of the home team could get a moneyline return of up to +187 from FOX Bet for an Eagles win, with BetMGM and Caesars close behind at +185. The game’s over/under was mostly set at 43.5, with FOX Bet and Betfred dipping lower to 43.

No matter what, Steelers-Ravens games are intense

Just like the Eagles-Cowboys rivalry, any Steelers-Ravens matchup offers the potential for intense fun. The AFC North competitors meet in Baltimore Sunday afternoon with players and coaches casting maybe half an eye on the out-of-town scores, as both teams require a Jacksonville Jaguars upset of the Indianapolis Colts (-14.5 at FanDuel) to have a chance of sneaking into the playoffs.

The Steelers (8-7-1) beat the Cleveland Browns 26-14 at Heinz Field Monday night to keep their hopes alive, while the Ravens (8-8) lost 20-19 Sunday to the Los Angeles Rams — a fifth straight defeat in a disastrous streak that started with Pittsburgh beating them by a point at Heinz Field a month ago.

The Ravens still may be missing quarterback Lamar Jackson due to lingering ankle injury, while the Steelers have key players, including wide receiver Diontae Johnson and cornerback Joe Haden, potentially out due to COVID concerns.

On average, the Steelers are a 4.5-point underdog, but DraftKings and Betway have a 4-point spread and a Steelers bettor can do best by using a 5-point spread from either Caesars or the books that use Kambi odds, such as BetRivers, Unibet, and TwinSpires. Caesars also has the best moneyline return on the Steelers at +185, while the over/under is 41.5 across the board.

A lot of attention will again be given to Roethlisberger, who received an emotional sendoff from fans at Heinz Field Monday despite a historically dinky passing performance: 24 of 46 passes completed for all of 123 yards. And that was with his top receiver, Johnson, so there’s no telling how things will go if he’s sidelined by COVID. (DraftKings sets Roethlisberger’s over/under on passing yards at 233.5.)

Someone with faith in both the Steelers winning and Colts losing (and the Las Vegas Raiders and Los Angeles Chargers not tying, which is another requirement for the Steelers to make the postseason) can get paid off at 16/1 at BetRivers and the other Kambi sites.

💪 First career 4-sack game
💪 League-leading 21.5 sacks (in only 14 games)
💪 1.5 sacks away from new NFL single-season record
💪 14.5 career sacks against the Browns (most vs. any opponent) pic.twitter.com/Fq2hn6MSFl

With his dominating performance Monday night, meanwhile, Steelers linebacker T.J. Watt appears to have wrapped up the NFL’s Defensive Player of the Year award every bit as much as he wrapped up Browns QB Baker Mayfield four times last time out. While in need of 1.5 sacks to set a new NFL record, he is now -1400 for the award at BetMGM and a still bigger favorite elsewhere.