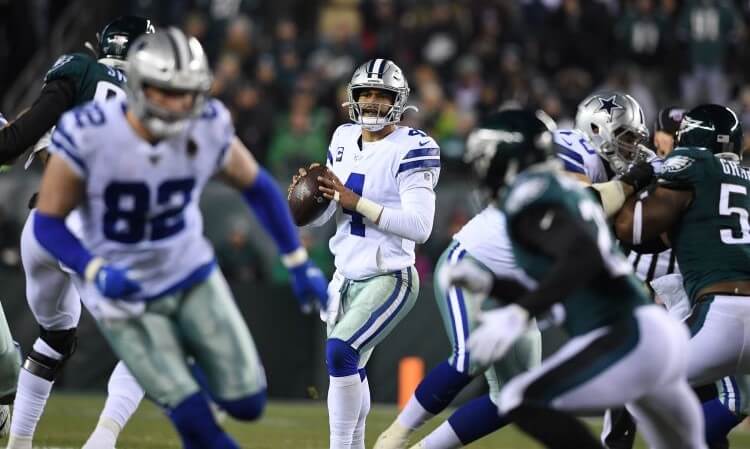 There are no signs the NFC East will be much better this year than last, when no team finished even .500, but that doesn’t mean the intense Philadelphia Eagles-Dallas Cowboys rivalry can’t create a very entertaining football game for America and its bettors.

The two 1-1 teams collide in Texas at 8:15 p.m. on Monday Night Football as the only two teams in the division to beat an opponent outside of the NFC East so far this year, and the winner will emerge as the sole team among the quartet with a winning record.

A second early road victory after winning in Atlanta two weeks ago would be an extra boost for the Eagles, whom the Pennsylvania online sportsbooks deem nearly the Cowboys’ equal by making Philadelphia an underdog by just about a field goal — the customary line cost of being a visitor. As Dallas is a much bigger favorite by comparison to win the division, the closeness of the Monday night spread likely stems from its missing a huge number of players — especially on defense — due to injury, COVID, and suspension.

The Eagles have their own injury issues, missing two Pro Bowl Brandons — right guard Brooks and defensive end Graham — so there could be a war of attrition going on for the nation’s vast army of football fans to behold. Pennsylvanians will represent a large percentage of those watching, and the sportsbooks are dangling a wide array of special bets to pique their interest and keep them fixated even if the game gets lopsided in either direction.

Most of the sportsbooks listed the Eagles as a 3.5-point underdog Monday morning, with FanDuel and BetMGM exceptions dipping to just 3. Most of the books using 3.5 apply extra juice to take the Eagles, so the best value there for a Philly backer would be to use Betfred at the standard -110.

The moneyline payoff for an Eagles win ranges from +145 (Unibet and certain other Kambi-backed sportsbooks) to the Caesars offering of +165, which makes it the best site for those wanting an upset.

The over/under on total points is either 51 or 51.5. Those betting the “over” have the option of paying extra juice of -115 for the 51 at DraftKings, BetMGM, or Betway, with the alternative of taking reduced juice of -105 from FanDuel to use its 51.5.

The high number of defensive injuries for the teams combined with a resurgent Cowboys offense behind Dak Prescott does create the possibility for fireworks. Dallas has averaged 435 yards of offense in a close loss to Tampa Bay and last-second win over the Los Angeles Chargers, with Prescott completing 76.5% of his passes thus far.

For the Eagles, it’s a question of which offense shows up: the opening week group that had a field day with the Falcons, or last week’s version that couldn’t cross the goal line until the fourth quarter vs. the San Francisco 49ers.

The Cowboys will have the added backing of 80,000-plus fans for their first home game of the year, who will raucously welcome the return of Prescott after he suffered a season-ending injury last October. Without him, the Cowboys still beat the Eagles 37-17 in Dallas late last year.

Dallas is currently a favorite to win the division by anywhere from -135 (DraftKings, Betway) to -182 (BetRivers and other Kambi sites).

The Eagles have looked good enough, meanwhile — or perhaps it’s more a case of the Washington Football Team and New York Giants looking so bad — that they have moved up from the division’s preseason longshot of as much as +550 to now somewhere between +300 (DraftKings, Betway) and +400 (Kambi sites, Betfred).

Every Monday night game receives special attention from the sportsbooks in terms of offerings to bettors, and it becomes especially interesting with the Eagles involved. Here’s some of their prop bets for the game — usually advertised as “odds boosts” — showing up as of Monday morning:

FanDuel: Eagles and Cowboys each will score at least two touchdowns and two field goals, +320 (reportedly a boost from +270).

BetMGM: The Eagles will win with both teams scoring at least 20 points, +260.

BetRivers: DeVonta Smith and the Cowboys’ CeeDee Lamb will both score a TD, +550 (with Smith doing so by himself at +165).