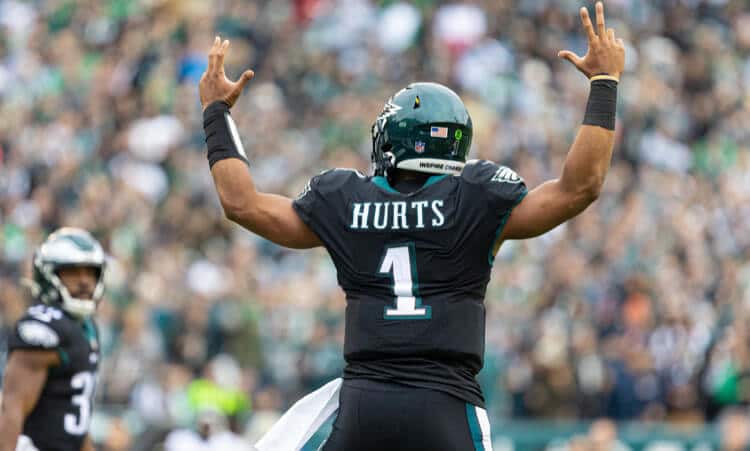 The savvy sports bettor dreams of opportunities to “middle” games — to bet one team against the spread and then, following a line move of at least a couple of points, bet the other team, with a little ground in the middle where both bets would win.

Thanks to a bizarre series of COVID-related circumstances, the Eagles’ Week 15 game against the Washington Football Team presented one of the most massive potential middles an NFL bettor will ever see. And it has even opened the door for the rare double-reverse middle, to possibly coin a new term.

When the lines opened on the night of Sunday, Dec. 12 (such a long time ago that we can’t just say “Sunday”), the Eagles were, give or take a half-point depending on which of Pennsylvania’s legal sportsbooks you checked, 3.5-point favorites. It was a standard line favoring the home team in a meeting of two 6-7 squads with comparable levels of motivation to win and stay in the wild card hunt.

By Friday morning, when Penn Bets previewed what was supposed to be a Sunday afternoon game, the Eagles were favored by 12 at most books and went as high as 12.5 at FanDuel. If you had bet on the Birds at -3.5 a few days earlier, you could now bet on Washington and be in a position to win both bets if the Eagles prevailed by anywhere between 4 and 12 points, while merely losing the vig if the final score didn’t fall in that range.

Check out this Eagles line movement 👀🏈

The reason the line ballooned? A massive COVID outbreak among the Team, reaching 23 players. That’s also the reason the NFL decided to postpone the game to Tuesday.

And since then, the line has come back down. Washington is getting some of its key players back. The Eagles actually lost two offensive linemen, Andre Dillard and Landon Dickerson, due to COVID protocols. And as of Tuesday morning, Philly was a 6.5-point favorite. So there’s a whole new opportunity to re-middle by betting on the Eagles now if you happened to take the WFT when they were double-digit dogs.

These various lines might not be finished moving yet. We probably won’t know until 4 p.m. Tuesday who will be Washington’s starting quarterback. If it’s Taylor Heinicke or Kyle Allen, both of whom were on the COVID list as of Tuesday morning, maybe the spread on this game shrinks a bit more. If it’s Garrett Gilbert, who was signed off the New England Patriots practice squad on Friday, maybe we’re back to double digits.

Heinicke and Allen were just two of 15 WFT players, including All-Pro guard Brandon Scherff, still on the COVID list Tuesday morning, and seven assistant coaches will miss the 7 p.m. game at Lincoln Financial Field. On the bright side for Washington, star receiver Terry McLaurin is now out of concussion protocols.

One possible benefit to the delay for the Eagles: QB Jalen Hurts’ injured ankle had two extra days to heal. He was expected to start whether the game was Sunday or Tuesday, but the closer he is to full strength and the more capable he is of scrambling, the better for the Birds.

Due to all this personnel uncertainty, player prop betting options aren’t anywhere near as robust as they are for the typical NFL game. At DraftKings Sportsbook, for example, Hurts was the only player on either side with props listed Tuesday morning. His passing yardage line is 196.5, over/under for passing TDs is 1.5 (juiced heavily to the under, at +150/-200), interceptions are 0.5 at +145 for the over and -195 for the under, and his rushing yardage line is 44.5.

FanDuel didn’t post a single player prop on the game as of 10 a.m. Tuesday, while BetMGM listed touchdown scorer props but nothing else.