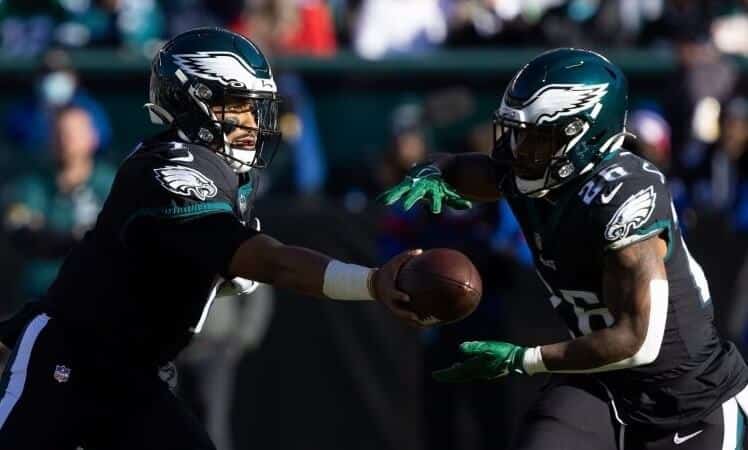 The start of NFL preseason action for the Eagles and Steelers is more than a week away, but PA’s online sportsbooks already have available a range of betting options for their players’ regular-season performance.

Think Jalen Hurts will easily surpass his 3,144 passing yards from 2021? A.J. Brown will give the Eagles the new receiving threat they sought by having a 1,000-yard season? Najee Harris will match his stellar rookie season and rush for more than 1,150 yards?

Those are all among the options offered for fans in Philadelphia and Pittsburgh and across the Keystone State willing to back their favorite players with a futures bet. Of course, the over/under totals format enables a bet just as easily against anyone’s performance.

The downside to any such futures bet is you have to be willing to tie up some money for the next five or so months until the 17-game season ends. The upside is you have a rooting interest one way or another in every game in which the player suits up.

And if you’re a line-shopper, considering there are 14 different online sportsbooks in the state (although some duplicate odds from the same source, such as Kambi), you can find some useful betting edges.

Here at Penn Bets, we’ve streamlined the work for readers/bettors, by examining what’s currently offered by the different sites and finding the best potential value. We list them below, starting with Eagles, finishing with Steelers.

What you do with the info is up to you, but you can’t say we didn’t give you a fighting chance to come out ahead by season’s end.

The Eagles’ third-year quarterback, who has both admirers and detractors, has a gap in the sportsbooks’ passing yards totals that can be exploited.

PointsBet PA and FanDuel both set the over/under at 3450.5, with PointsBet the better option for the over by setting standard -110 vig for it. (For futures bets, sportsbooks often inflate the juice to something like -112 or -115 in both directions.) Some other sites set Hurts’ yardage total at 3650.5, with DraftKings at -110 to take the under.

Depending on your view of whether or not Hurts will take a step forward in production in 2022, there’s apparent value in betting the over with PointsBet or the under with DraftKings, or potentially even using both to try to see him hit the sweet middle between 3,451 and 3,650 yards.

Hurts, of course, is one of the many young quarterbacks in the league as dangerous with his feet as arm, and thus the sportsbooks post rushing props for him as well. FanDuel has the lowest rushing yardage total for him, at 675.5 (-118 on the over), and DraftKings has the highest at 725.5 (-130 on the under).

DraftKings and Betway (they both use SB Tech for odds) are alone in posting an interception total, setting it at 10.5 (-110 either way), which is higher than the 9 that Hurts threw in 2021.

Sanders should have a collection of fans interested in him from every part of the state, considering he played high school ball in suburban Pittsburgh, starred in college at Penn State, and has played for the Eagles since they drafted him in the second round in 2019.

Injuries limited his playing time and stats last year, and the sportsbooks take that into account with Sanders’ o/u totals for 2022. Most of them use a number around 850 for his rushing yards, but PointsBet deviates to 899.5 (-120 for the under). For Sanders supporters, over 849.5 yards from BetMGM (-115) is the best option.

The halfback didn’t run for a TD last year, which FanDuel and Betfred reflect in setting the o/u at a modest 4.5 for that stat, with FanDuel the better option at -112. BetMGM is using 6.5 TDs, with substantial vig of -140 to take the under.

The Eagles paid dearly to acquire the former Tennessee Titans receiver on draft day and sign him to a long-term contract. He was limited by injury to 13 games last season, and Philadelphia and the oddsmakers all expect him to improve on his 2021 stats.

PointsBet has set the lowest receiving yardage total, 999.5 (-115 both ways), while DraftKings has 1,025.5 (also -115 both ways). With unusual consistency, every site puts his reception TDs o/u at 6.5. There’s not a whole lot of fluctuation in their vig, either, although if betting the under, there’s even money of +100 to be had using one of the betting sites supplied by Kambi (BetRivers, Unibet, TwinSpires, Parx, Barstool, PlaySugarHouse).

Only a couple of sites post reception numbers for futures bets, and DraftKings and BetMGM both use 70.5 (-115) for Brown.

Philadelphia’s 2021 No. 1 draft pick had the type of rookie season that was hoped for, and the interesting part of predicting his 2022 stats is how they will be affected by Brown’s presence on the other side. In the case of his yardage, for example, the sportsbooks all lean lower than last year.

The sportsbooks are casting some doubt upon whether Philly’s fifth-year tight end can match his yardage number from 2021, while figuring he can reach that reception number.

Switching across the state to Steelers, for whom there are no quarterback futures due to the unsettled transition from Ben Roethlisberger, Harris figures to draw the most betting attention.

While he eclipsed his 2021 preseason o/u numbers, it was with unusually heavy workload status that Pittsburgh may ease off from this year, which the oddsmakers apparently take into account. None of them posts a rushing yardage total that would match Harris’ rookie performance.

FanDuel and Betfred both post a yardage o/u of 1120.5, with the -115 vig to bet the over from Betfred the far better option to use. The highest number is 1150.5 from DraftKings and Kambi sites, with DraftKings better to use on the under at -115.

There’s a nice range of options on Harris’ TD total, with FanDuel and Betfred both using 7.5 (-124 from FanDuel the better price to bet over) and DraftKings and BetMGM using 9.5 (better vig on the under from BetMGM at -115).

With his dual capabilities, having caught 74 passes last year, Harris is one of the players for whom a couple of sites post a total for combined rushing/receiving yards. PointsBet and DraftKings figure similarly on it for Harris, with PointsBet using 1599.5 and DraftKings 1600.5.

The wide receiver is in a contract dispute with the Steelers after seeing all of the lucrative signings of Brown and other wideouts in the offseason. He’s under contract for 2022 and in camp, so he’s expected to play whether he gets a new deal or not, though none of the sportsbooks see him matching his gaudy 2021 numbers.

Only DraftKings and Betway put his yardage number above 1,000 — and only a half-yard above that at 1000.5 — while FanDuel, Betfred, and Kambi sites such as BetRivers all use 950.5.

Kambi sites set Johnson’s receiving TDs at 5.5, with other sites going higher to 6.5. Both DraftKings and BetMGM have his receptions at 85.5.

The tall wideout had similar numbers in 2021 to his rookie season but a big dropoff in touchdowns from 9 to 2. His yardage total is set lower by the sportsbooks than what he achieved in either of his first two seasons, with DraftKings and the Kambi books using just 725.5, with Kambi’s -112 better for over bettors. PointsBet’s 750.5 is the best option for under bettors.

PointsBet has over 3.5 TDs for Claypool set at -130, while those leaning against him can consider DraftKings or BetMGM under 4.5 at -140. The latter two both have his reception o/u at 58.5.

Another Penn State alum, Freiermuth had a quiet but solid rookie season. Only DraftKings and Betway among the state’s sportsbooks offer prop bets for him in 2022.