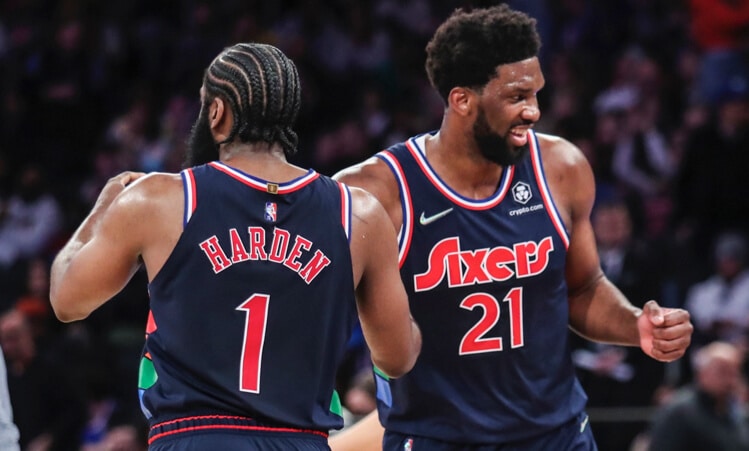 The James Harden honeymoon phase is in full effect. But will it last? And how much do three wins against middle-of-the-road opposition matter?

The folks who set the odds at Pennsylvania’s legal mobile sportsbooks are taking a wait-and-see approach, even as giddy 76ers fans are penciling in plans to be at the Wells Fargo Center deep into May.

Since Harden joined the Sixers lineup, they routed the Timberwolves (currently the No. 7 seed in the Western Conference) in Minnesota 133-102, handled the New York Knicks (the fourth-worst team in the East) at Madison Square Garden 125-109, and overcame a rocky first half to beat those same Knicks 123-108 in Harden’s home debut. The Sixers have moved into second place in the Eastern Conference at 38-23, Harden is making almost everyone around him better, and the whole team is having fun.

But their odds for postseason success, since improving considerably the moment the Sixers dealt Ben Simmons and assorted pieces for Harden and Paul Millsap, haven’t gotten any shorter. In fact, they’ve generally gotten a tad longer.

Whether because of Harden’s history of playoff struggles, Joel Embiid’s past problems staying healthy, or just a feeling that wins over the Wolves and Knicks don’t mean much, oddsmakers aren’t making the Sixers the favorites in the East. At least not until Embiid and Harden show something against top competition.

Which brings us to the week ahead. The 76ers host the Cleveland Cavaliers (No. 6 in the East) Friday night. Then they go to Miami to face the top-seeded Heat on Saturday. That’s followed Monday by a home game against the Chicago Bulls (No. 3 in the East), which will be the focus of a special multi-city BetCast. Then on Thursday, Simmons will continue to sit out and avoid an aural assault as the Brooklyn Nets — still the betting favorites to win the East, despite a .500 record — come to Philly.

Presumably, these four games will show the bookmakers what they need to see.

M-V-Biid indeed, but other futures steady

As of Friday morning, Caesars was the only operator booking the Sixers as one of the top three favorites to win the NBA championship, at odds of +475. The heftiest return for a 76ers title is +700, at FanDuel, as well as the assorted PA sportsbooks that use Kambi’s odds (Barstool, BetRivers, Unibet, etc.). Despite the 3-0 start with Harden, the numbers are virtually unchanged from the range of +550 to +750 an hour or so after the Feb. 10 trade.

The odds on the Sixers to win the Eastern Conference range from +300 to a high of +340 at DraftKings. The Nets still have the shortest odds at most books (from +260 to +300). And the majority of books list the defending champion Milwaukee Bucks slightly ahead of the Sixers, between +275 and +350. The current No. 1 seed, Miami, is only the fourth favorite, at +500.

Immediately after the trade, FanDuel was the only major sportsbook posting Eastern Conference odds for Philly and installed them at +240. Now, confoundingly, they’re +320 at FD.

The one Sixers futures bet where the price has continued steadily shrinking is on Embiid to win MVP. His odds sat around +220 after the trade, and by Friday morning, he was as heavy a favorite as -150 at FOX Bet. Betfred is offering the most customer-friendly price, +100.

Despite outstanding, MVP-worthy seasons from the likes of Nikola Jokic, Giannis Antetokounmpo, and Ja Morant, this is clearly Embiid’s award to lose. While there might have been some concern that the addition of a second superstar in Philly would chip away at the big man’s perceived value, it seems the sportsbooks are reacting instead to the near-certainty that the Sixers will finish the regular season with one of the top three records in the East. If that happens and Embiid stays healthy, he should take the award in a landslide.

For Friday’s game against the Cavs — against whom Embiid racked up a 40-point triple-double without Harden on Feb. 12 — the 76ers are a 7.5-point favorite at all sportsbooks, with FOX Bet providing the best value at +100 on the home team’s side of the spread.

If you prefer the moneyline, the Kambi books have the shortest price on the Sixers, at -315, while Cavaliers backers can get the underdog at +275 at FanDuel or BetMGM.

The over/under is 219.5 at all sportsbooks except PointsBet Sportsbook PA, which has posted a number of 220.5.

Then there are the player props. There’s a new “Big Three” emerging in Philly, with second-year guard Tyrese Maxey averaging nearly 25 points per game with Harden as his backcourt mate, up 8 points from his pre-Harden average this season. In terms of points, rebounds, and assists, respectively, here are the numbers for Embiid, Harden, and Maxey over the last three games:

At FanDuel Sportsbook on Friday, here were the player prop lines in those three categories for the trio in the game against Cleveland:

All the sportsbooks are placing high vigs on the over for Maxey’s points, as they should be, if they’re going to keep his line where it was pre-Harden. One intriguing alternative way to bet on a big Maxey game is to go the PointsBetting route. You have to bet over 17.5, rather than 16.5, to take advantage of the PointsBetting option at PointsBet, but this is definitely a prop where the upside to betting per point is far greater than the downside. Maxey has only scored under 14 once in his last dozen games, while he has exceeded 20 points in half those games and posted a high of 33.

For what it’s worth, there were no early lines posted as of Friday morning for Saturday’s game in Miami, or any contest after that. But that Heat game figures to be the first of the Harden era where the Sixers are underdogs — and quite possibly the last until they play the Suns in Phoenix on March 27.