Harper And Wheeler Not The Favorites For NL Awards, But They’re Close 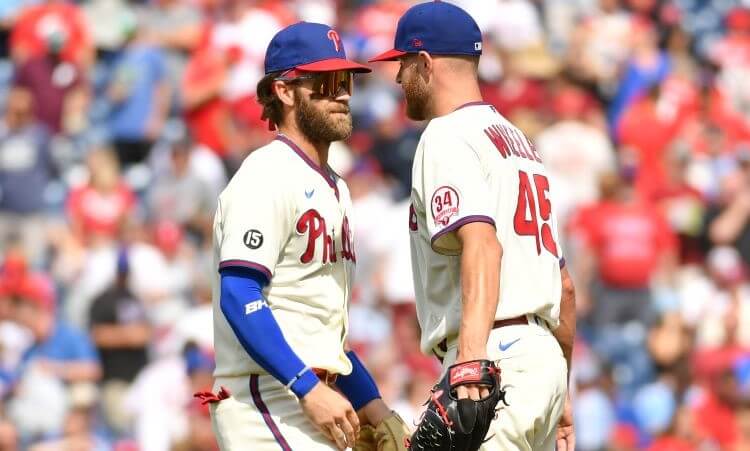 The Phillies’ Bryce Harper picked up his second MVP award last season and Zack Wheeler came close to getting the National League’s Cy Young Award, and the duo lead futures betting options to consider among the team’s stars in 2022.

Most of Pennsylvania’s 14 online sportsbooks set odds during spring training on the trophies and statistics that MLB’s top players will end up with by season’s end, just as they offer futures bets on each team’s performance.

So long as bettors don’t mind tying up some of their dollars for half a year, they can examine the various sites and find what they consider an edge in anticipating season-long performance. Sometimes, there’s a potential arbitrage “middle” to bet by taking advantage of two books’ wide differences in totals. And sometimes, a die-hard fan of a certain player just finds the best value bet to make in rooting for him all year.

Penn Bets has scouted what the various sites are offering for the Phils — the sites vary in the quantity of futures bets they offer and on which players — and what follows are the options available as of Monday morning for those who like this sort of action. (This author does, personally, as it requires just a nominal investment to provide a rooting interest in all 162 games of the year.)

In his third season in Philadelphia, Harper batted .309 with 35 home runs and baseball’s best slugging percentage to beat out the Nationals’ Juan Soto and Padres’ Fernando Tatis Jr. for league MVP. This year, he won’t have Tatis to worry about due to an injury, but another young phenom, the Braves’ Ronald Acuna Jr., will be back from a 2021 injury and a likely force to be reckoned with.

Many sportsbooks have Harper at +900 to win the award again, with only Soto and Acuna clearly ahead of him, but his supporters can get a better payoff by using FanDuel with its +1200 odds (with the site also sliding Dodger Mookie Betts’ odds ahead of Harper’s).

Many sites list odds for league leaders in various categories, and Harper is the Phils’ top candidate in many of those, while not a favorite in any. To lead all of MLB in homers, he is generally 20/1. Sites that use Kambi odds (BetRivers, Unibet, TwinSpires, etc.) offer the best return at 22/1 on Harper to lead all of baseball in RBIs. The outfielder has slightly shorter odds to lead in runs scored, with FOX Bet providing the best payout at 17/1.

And just as they offer over/under season totals on team wins, some sportsbooks post an o/u for certain players’ stats. For Harper’s home runs, DraftKings and Betway set the lowest number at 33.5, while FOX Bet is highest at 35.5 (offering even money to bet the over).

Harper’s RBI total ranges from 97.5 (DraftKings, Betway) to 100.5 (Kambi-supported sites). His hits number, meanwhile, could be deemed a wide enough gap to provide an arbitrage opportunity: BetMGM has him down at 141.5 and Kambi is using 150.5. (Harper had 151 hits last year.)

In the second season of a five-year contract with the Phillies, Wheeler won 14 games, led the NL in strikeouts with 247, and finished second to the Brewers’ surprising Corbin Burnes in Cy Young voting.

Before the delayed new season starts in April, Wheeler is generally behind the Mets’ Jacob deGrom and Max Scherzer, Dodger Walker Buehler, and Burnes in the Cy Young odds posted by sportsbooks. A +1200 return can be had by going with either BetMGM or PointsBet.

That +1200 is also the most common number by the books on Wheeler’s chances of leading the MLB in strikeouts, with the Yankees’ Gerrit Cole and deGrom having the shortest odds. (Robbie Ray, then of the Blue Jays, now of the Mariners, had one more K than Wheeler to lead the league last year, with 248.) A believer in Wheeler who bets with FOX Bet can do better, however, by using its +1600.

The over/under set on Wheeler’s K’s this year is fairly close among DraftKings/Betway at 209.5, BetMGM at 210.5, and BetRivers and the rest of the Kambi sites at 211.5.

A wins o/u for him has been set at 13.5 by DraftKings, Betway, and BetMGM, with the latter offering even money to bet the “under” on that.

Hoskins had an injury-shortened 2021 season that limited him to 389 at-bats, but the young first baseman had a productive 27 home runs with 64 runs scored and 71 RBIs.

There is a tantalizing gap in forecasts for his performance this year, with BetMGM using 33.5 for his homer o/u and the Kambi sites using 27.5. Kambi also posts a runs number of 88.5 and hits number of 126.5, with other sites silent on those.

The slugging Schwarber is the Phils’ other key newcomer after bopping 32 homers in fewer than 400 at-bats for the Nationals and Red Sox last year.

Nola was a disappointment in 2021, with his nine wins and 4.63 ERA, and was surpassed by Wheeler as the team’s ace. He still struck out 223 though, and the oddsmakers aren’t writing off his chances of a comeback year.

FOX Bet and Betfred both have Nola at +1300 to lead MLB in strikeouts, and the over/under numbers posted on his K’s are generally higher than those for Wheeler. FOX Bet is the highest, at 219.5, while DraftKings and Betway use 215.5 and BetMGM lists 214.5.

Nola’s wins number, meanwhile, is one less than Wheeler’s, with DraftKings, Betway, and BetMGM all using 12.5.