Harris, Smith Among Betting Favorites For NFL Offensive Rookie Of The Year

Steelers, Eagles share interest in a dynamic start by a first-round choice from Alabama 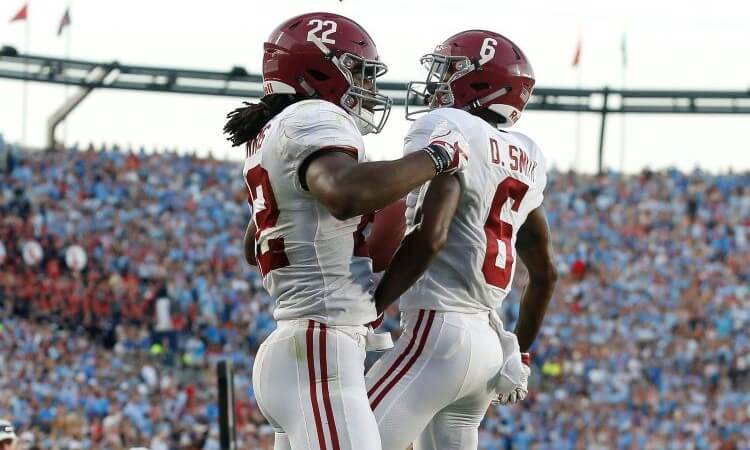 There’s something the Pittsburgh Steelers and Philadelphia Eagles have in common other than likely disdain for the high Pennsylvania Turnpike tolls when driving the 300 miles between the state’s two biggest cities.

That would be high expectations for a former University of Alabama offensive star to make explosive impact as a rookie in 2021.

The Eagles took Heisman Trophy winner DeVonta Smith 10th in the NFL Draft, immediately making him the unofficial No. 1 wideout for a receiving corps that has been lackluster in recent years. The Steelers, meanwhile, used the 24th pick to make Najee Harris the first running back taken. He was Alabama’s all-time rushing leader, surpassing records set by the likes of Derrick Henry, and is being counted upon to reinvigorate Pittsburgh’s moribund running game.

Now oddsmakers have joined the teams’ coaches and fans in focusing on what the dynamic pair can do in their rookie seasons. Pennsylvania’s online sportsbooks have posted odds for NFL Offensive Rookie of the Year, and they are among the top eight to 10 contenders.

They’re in line behind the rookie QBs

It is common for a quarterback to be voted Offensive Rookie of the Year, which is why the Jaguars’ Trevor Lawrence, Patriots’ Mac Jones, Bears’ Justin Fields, 49ers’ Trey Lance, and Jets’ Zach Wilson are the top five favorites to receive the award at the end of the season.

Odds on Lawrence, the clear favorite both because of perceived talent and his clearly pronounced role as Jacksonville’s starting QB, range from +275 at FOX Bet to +400 at FanDuel and DraftKings. But Harris is the first non-quarterback listed, with odds ranging between +850 and +1000, and Smith is the first or second wide receiver listed (along with the Bengals’ Ja’Marr Chase), with odds from +1400 to +2200.

Here’s how six of the top Pennsylvania online sportsbooks have the two potential rookie sensations listed for Offensive Rookie of the Year:

The betting sites also post futures options to gamble on whether Harris and Smith will go over or under certain season-long totals.

Neither player was put on display much in preseason games — Smith missed some time in early August with an MCL sprain — but they’ve done nothing to discourage high expectations for being integral to each team’s offense. Harris seems almost certain to be highly used as a dual running and receiving threat, supporting veteran QB Ben Roethlisberger in a Steeler offense that should be more balanced than last year’s pass-heavy attack. One uncertainty about the rookie’s performance level, however, is an overhauled offensive line that will be one of the NFL’s least experienced.

The over/under on Harris’ season rushing yards is as low as 975.5 from BetMGM and FOX Bet, while FanDuel and BetRivers (along with other Kambi-supported sites like Unibet) put the number at 1000.5. Harris’ o/u on rushing TDs is set at 7.5 across the board, with BetMGM offering the best vig – the standard -110 – for anyone betting the over.

Recognizing the considerable receiving skills that complement his running, DraftKings is also offering an o/u of 44.5 on Harris’ reception total. The Kambi sites, meanwhile, have posted 375.5 as the o/u for his receiving yards.

Smith looking for connection with Hurts

Smith will have a hard time in the NFL matching the gaudy numbers that garnered all kinds of awards and records at Alabama, but it’s assumed he will be Eagles QB Jalen Hurts’ favorite target. Hurts’ relative inexperience is one factor that could limit Smith’s ability to post impressive numbers.

DraftKings has set 775.5 as the o/u for Smith’s receiving yards, while FanDuel and Kambi go higher to 800.5. The sites offering options on his receiving touchdowns agree on 5.5, but DraftKings (+110) is the better choice for those who want to bet the over.

DraftKings makes Smith the third most likely rookie to lead the NFL’s newcomers in receiving yards, posting a line of +500 for him to do so. The book also makes Harris the odds-on favorite to lead NFL rookies in rushing yards, at -225.