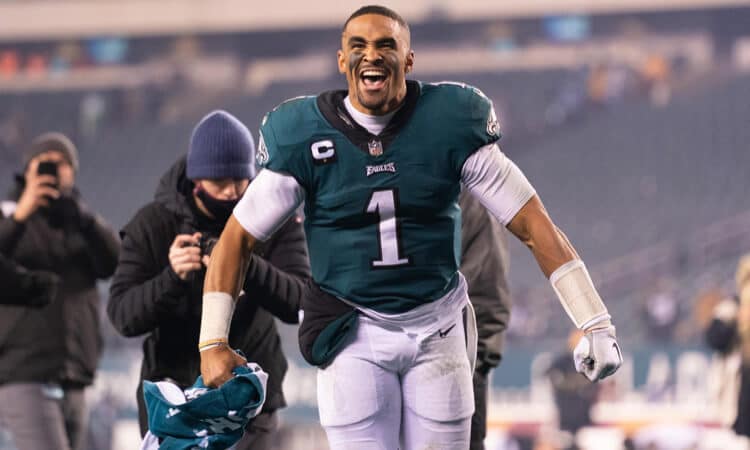 As Jalen Hurts prepares for his third NFL season and his second full season as the Eagles’ starter, there’s one thing everyone agrees on: He’s an outstanding fantasy quarterback.

Hurts will rack up serious stats with his legs (he ran for 784 yards and 10 TDs in 15 games last season) that make up for his, to this point, pedestrian passing numbers (just 209.6 yards per game in 2021, to go with a mere 16 air TDs and 9 interceptions). He finished the 2021 regular season ninth in the league in QB fantasy points and sixth in QB fantasy points per game. His average draft position for season-long fantasy drafts taking place so far in 2022 sees him, depending on which site you trust, ranging from the sixth to the eighth quarterback taken.

He’s not Josh Allen or Patrick Mahomes. But he’s not terribly far off — fantasy-wise. In real life? Well, saying Hurts isn’t far off there requires a bigger leap of faith.

‘You missed the value’

“The pros are lukewarm about Hurts,” Simon Hunter, an Eagles fan, professional sports bettor, and co-host of The Favorites podcast, told Penn Bets. “I’m optimistic, but that’s the Eagles fan in me. The other pros, they mostly think the Eagles getting to the playoffs last year was about the schedule, and they had the best offensive line so they were able to run the ball, including Hurts being able to run the ball. I get why people doubt him. I’ve had plenty of guys bring up the Tampa game, in the playoffs, where he missed Quez [Watkins] down the middle for an easy touchown.

“But I can see Hurts taking a step this year, and I love his chances for MVP.”

What Hunter doesn’t love are the current odds on that wager at the mobile books in Pennsylvania and elsewhere.

The Eagles QB is a mere +2000 to win MVP of the league at DraftKings Sportsbook and Betway, a slightly more appealing +2200 at PointsBet, +2500 at FanDuel and BetMGM, and a best-available +3000 at FOX Bet and such Kambi-connected sportsbooks as BetRivers, Barstool, and Unibet.

But Hurts opened between 40/1 and 60/1 depending on the sportsbook, only to see that number shorten significantly after Philly acquired receiver A.J. Brown on draft day and made other moves that enhance their chances of winning 11 or more games — as they would realistically need to do for Hurts to be voted MVP.

Hurts now has the 12th-shortest MVP odds, based on longest available odds for each player. We’ve seen young and talented but inconsistent QBs put it together and win the award before, like Lamar Jackson in 2019. Even former Eagles QB Carson Wentz moved into the frontrunner position in 2017 before a knee injury ended his season.

The 23-year-old Hurts checks a lot of the boxes with regard to the type of player who can suddenly contend for an MVP award without having done so prior. But is there enough of a chance to justify betting him at 30/1?

“I’m a value bettor,” Hunter said, “and by the book, you missed the value at this point. I would say don’t bet it, and let the Eagles maybe lose Week 1 to Detroit, because then Hurts might move all the way to like 70/1 to win MVP and you can bet him again. At 30/1 or lower, there’s no value in that. The year Lamar won, he was 50/1 in Week 1. That’s what you’re looking for.”

Can Hurts be an elite QB and can he lead a team to the Super Bowl? He undoubtedly needs to improve over what he’s shown so far to earn affirmative answers to those questions.

His coaches are looking for him to get better at reading defenses and improve his accuracy. All reports point to him working hard to improve over the offseason.

Nick and the offensive coaches say there has been improvement with his footwork and Jalen’s accuracy and he has been working all offseason on those things pic.twitter.com/2tDlCPf1ax

Some analysts are high on Hurts, such as ex-NFL quarterback Dan Orlovsky. He tweeted toward the end of last season, “Respectfully — anyone who says Hurts hasn’t done enough to be Eagles QB next year doesn’t watch the same tape as I do,” and has been known to highlight plays in which Hurts makes sharp decisions.

“We’re gonna be able to, I think, come to a conclusion on Jalen Hurts at the end of this year,” said quarterback trainer Jordan Palmer (brother of Carson Palmer) this week on The Favorites podcast that Hunter hosts with Chad Millman. “For Jalen, for me, the weapons around him, I don’t know if it’s make-or-break, but we’re going to be able to come to a consensus at the end of this season.”

That’s generally the attitude among the Eagles fans and media: If Hurts is “the guy,” we’ll know by the end of the year. If he isn’t, GM Howie Roseman will look to find “the guy” in the next draft, before having to pay Hurts big money.

“It’s impossible to know, until we see him this preseason, what kind of changes he made,” Hunter said. “I read a whole article about how apparently he changed his throwing motion. He’s trying to take 0.3 seconds off his release, which — that’s a big deal, at least we know he’s working on technique. We already know he has the athleticism. So I’m optimistic. But I’m waiting for preseason to make big-money bets on the Eagles, just because I need to see it, I need to see him read defenses.”

Earlier, the Eagles were as high as +250 to win the NFC East, but now the best price that can be found on them is +190. That movement reflects both the on-paper offseason improvements the team has made and the fact that Eagles fans in Pennsylvania and New Jersey, in particular, have easy access to wagering and aren’t shy about putting money on their team.

So, as with MVP markets, the value on the team is diminished. But if turns out Hurts can be an MVP candidate in 2022 and not just a big fantasy-stats player, even that diminished price may be looking like a steal a few months from now.