LineSwings, a Philadelphia-based startup, is seeking to help sports bettors in the live betting landscape. 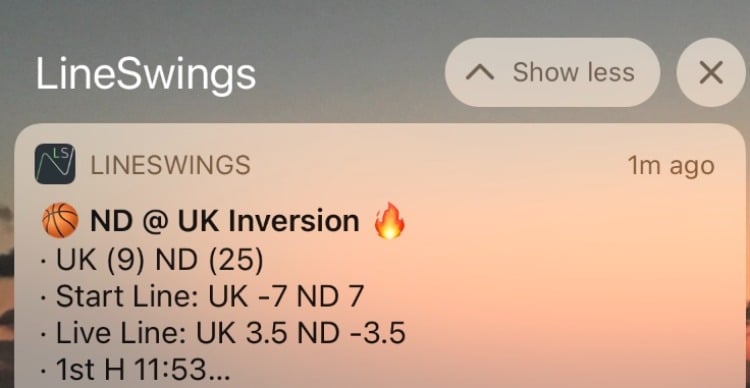 Like most great ideas that have been born in Philadelphia, Patrick Dougherty’s came at Chickie and Pete’s over a few pitchers of beer and some crab fries.

Dougherty, a sports fan in the “average Joe” sense, was hanging out with buddies and was dazzled by the scribbled notes they kept referring to.

“They had pieces of paper with all their bets written on it, and I was fascinated,” Dougherty said. “I was like, ‘How do you guys know about all these teams to make all these bets?’ And of course it turns out that they really didn’t, but while we were watching, there was a lot of talk of ‘I really should hedge this’ or ‘I really like the live line here,’ and the wheels started spinning.”

They spun him to his childhood friend, Mike Rosenello, who works in software development. They also spun him to his college buddy, Dan Abato, who works in the user interface design field. They sat down, hashed out a basic idea, and last September launched a web-based prototype of their app LineSwings. And after a successful soft launch, the app became available a little less than a month ago for both iOS and Android devices.

So what is LineSwings? What do they do?

When the dogs steal the show

Right now, it’s pretty simple: The free app will alert you — based on your specifications — when a live line has, well, swung.

“Hundreds of thousands of people have handicapped the game, and we are working under the theory the opening lines are right,” Dougherty said. “Live betting is moments. They’re not long-lived. What LineSwings is trying to do is alert you to an anomaly. It’s not that we think the price is necessarily wrong — we’re just telling you the live spread has changed and the pros think the team that’s losing should win this game, or vice versa.”

“We’ve collected over a million data points on the NBA and college basketball,” said Rosenello. “And we’re collecting a ton more.”

And with this data, the trio will be rolling out — in a matter of weeks — the first iteration of their predictive model.

“We are now at a point where we are collecting enough data to model, to create our own live model of the line, which will probably jibe 99% of the time with what’s out there,” said Rosenello. “Our goal is to be able to notify users when that 1% happens, when the live line the sportsbooks have is wrong based on our models.”

Live betting on the rise

And with live betting being a major part of the sports betting experience — and it’s only poised to grow exponentially — a predictive model on what the live lines should be might come in pretty handy.

“We want to bring the fairly simple but usable offering we currently have and bring it into more predictive modeling and algorithms in order to better serve the people who use LineSwings,” Dougherty said.

And the plan is to continue to hone the analytics side of the business.

“For the future, we want to start hammering away at modeling with the data and analytics,” said Rosenello. “We want to narrow it down, get as granular as we can.”

Live betting — especially live basketball betting — moves quick. In personal testing, this reporter found the alerts were sent in tune with the live score, and then it became a race to get the bet in before the line moved again. Obviously, for slower-paced sports like football and baseball, time — while still of the essence — is allowed to be stretched a bit.

“At the crux of what we put together is that we want to allow someone to digest all the games simultaneously and get a little snippet of information so they can maybe dive into a specific game and marry the empirical information LineSwings offers with some of their own subjective information,” Dougherty said. “We’re not saying sign up for LineSwings and you’re going to be the next big winner. We see ourselves more like a compass for a sports bettor who’s looking for a little edge.”