Despite Massive Leap, Maxey A Longshot To Be NBA’s Most Improved Player 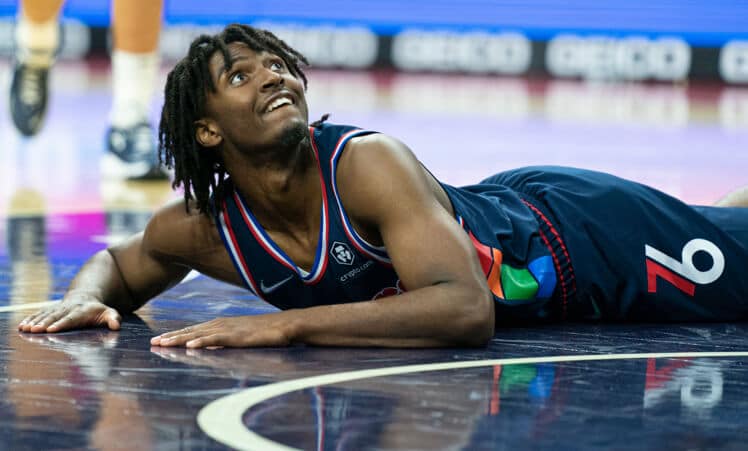 No 76er has benefited more from the Ben Simmons stalemate than second-year point guard Tyrese Maxey. The Kentucky product has more than capably filled Simmons’ shoes in the Sixers’ starting lineup, making perhaps the biggest year-over-year leap of any NBA player and seeing his triple-digit preseason Most Improved Player odds dip as low as 30/1 at DraftKings.

Heading into a Thursday night tilt with the Nuggets, Maxey has scored in double figures in all but one of his 15 starts this season and has carried the Sixers’ offense of late with Joel Embiid in COVID protocol, notching back-to-back 30-point efforts in losses to Milwaukee and Toronto. His current per-game averages of 17.5 points, 4.4 assists, and 3.7 rebounds are more than double his rookie output, and he’s shooting better than 50% from the floor and 40% from three-point range.

So why aren’t Maxey’s MIP odds even shorter? And why is an established star like Ja Morant currently favored (+260 at FanDuel) to win the award?

The answer to that question speaks to how the MIP criteria has changed since the award’s inception in 1986. With a few exceptions — among them Dana Barros, the only Sixer ever to win the award, in 1995, and an all-star that year as well — the 20th-century recipients were less like Morant than Maxey, having leapt from relative obscurity to establish themselves as starter-level players at worst and a few rungs beneath all-NBA at best. Before 2000, centers Gheorghe Muresan and Isaac Austin won the award, as did Darrel Armstrong and Don MacLean. That should tell you all you need to know about where voters’ heads were at.

But in the 21st century, the award has largely gone to already established players who’ve elevated their play to all-star level. The last five MIPs — Julius Randle, Brandon Ingram, Pascal Siakam, Victor Oladipo, and Giannis Antetokounmpo — clearly fit this modern mold, which is why Morant is priced like he is.

“We just kind of go on the history and figure out what [MIP voters are] looking for,” explained DraftKings Trading Director John Sheeran. “Historically, you need to be at an all-star level. Yes, Ja started from a higher base, but he also has a higher ceiling.”

Specific to Maxey, whose current MIP odds are 48/1 at FanDuel, Sheeran added, “He’s been pretty impressive. He just has a lot of ground to make up on the players at the top of the market. Overall, he’s got a long, long way to go to get to Ja Morant, who’s playing at an all-star level, which is where you need to be in a market like this.”

Any MIP love for Tyrese Maxey?

Plenty of room for an upset

But DraftKings Content Specialist Julian Edlow thinks there’s plenty of room for someone like Maxey to score an upset.

“Maxey’s one of the furthest down the board who has any traction,” said Edlow, adding that, before the season, Maxey was priced for Simmons to either be in the Sixers’ lineup or “bring back a [trade] package that would limit [Maxey’s] playing time.”

Neither of those things has happened yet, but some action is still expected at some point this season, and Embiid will soon return to his role as Philadelphia’s offensive focal point, which is why Maxey is “so far down the board,” said Edlow.

“I think there’s good value at 30/1 on Maxey, but he has maybe more difficult of a path than a Cole Anthony, whom you know Orlando wants to feature,” explained Edlow. “Ja Morant is a heavy favorite. He’s having a great season and taken his game to the next level, but he’s already an all-star type of player who’s gotten better. Then you’ve got a guy like Tyler Herro at 13/1 who’s a heavy favorite for Sixth Man [of the Year]. I think having Herro and Morant up there opens things up for some serious longshots.”

At +300, Charlotte forward Miles Bridges has made a Maxey-like leap and will warrant fringe all-star consideration if he continues his strong play. Anthony, Dejounte Murray, and Anthony Edwards can all be considered live longshots at odds of 20/1 or fatter, while Warriors guard Jordan Poole (25/1) is Maxey’s closest statistical and situational sibling, as he’s merely filling in until the injured Klay Thompson reclaims his spot in Golden State’s starting five sometime around Christmas.

“For me, if you made me play a top-of-the-board guy, it’d be Bridges, not Morant,” said Edlow. “And for a longer odds guy, it’d be [Jordan] Poole. My eyes are drawn to the longer odds guys because they’re just more what you typically think of for a MIP Award.”