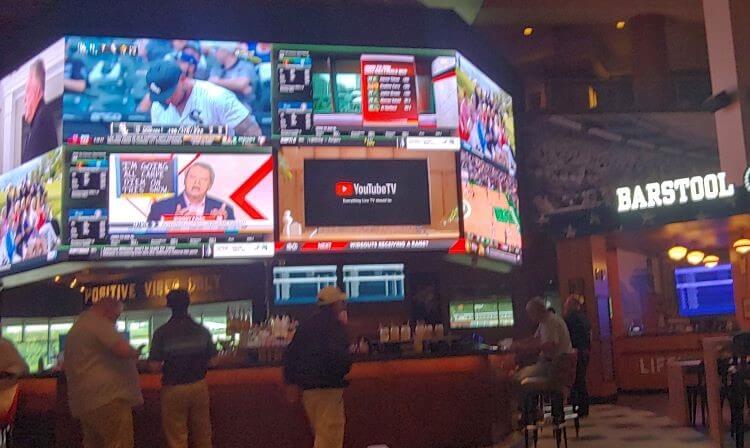 Late on a Thursday afternoon with the RBC Canadian Open’s first round the biggest thing airing on its new 48-foot-wide video wall, it was hardly prime time for the just-completed $7 million Barstool Sportsbook at Hollywood Casino at The Meadows. Still, casino officials couldn’t have been happier to show it off with an opening celebration.

Meadows General Manager Tony Frabbiele promised that there would be no better place to simultaneously watch a game, eat and drink, and bet on sports than in the expanded sportsbook environment. It gained the space of a buffet restaurant that became a victim of the COVID era, just as with its counterparts in casinos across the country.

“We believe we’ll be able to attract a lot more younger customers,” Frabbiele said, by creating a lively atmosphere and all-around dining/entertainment options while making prominent use of the Barstool Sports brand, which is popular among many young adults. The casino’s owner, Penn National Gaming, is part-owner of Barstool Sports and has adopted the brand for both its online sportsbook and retail betting operations. 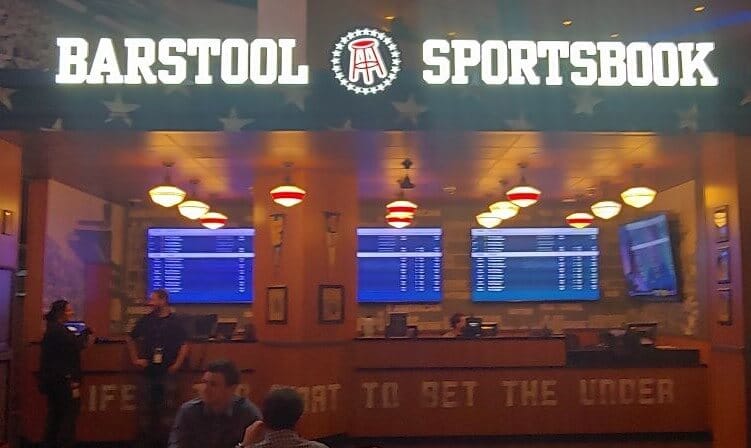 The Meadows’ main competitor for retail sports bettors is Rivers Pittsburgh, about 30 miles away, where the monthly betting volume close to downtown and the city’s sports stadiums is generally more than three times as high as at The Meadows. Frabbiele and Atif Chaudry, the longtime sportsbook manager recently promoted to a supervisory position overseeing regional sportsbooks for Penn National, believe the enlarged, airy sportsbook will help close that gap.

Everything’s changed except the betting

In giving a tour, Chaudry noted that the ticket-writing counter with its five windows, three odds boards, and 18 kiosks nearby for self-service betting are basically the same (although four kiosks have been moved to a casino entrance for those wanting to make quick in-and-out bets), but virtually everything else is different from the sportsbook that first opened in October 2019.

He walked across an Astroturf replica of a football field, complete with yard lines marked off, that has picnic tables for diners and will have cornhole and other yard games set up for patrons to play. Brick walls adorned with Barstool logos and Pittsburgh sports memorabilia resemble the facades of old-time ballparks.

A dining area serving burgers, wings, and other bar food staples has floor-to-ceiling windows to view the harness track where races are held four days a week throughout the year. The centerpiece beneath the giant new multi-game TV screen is a large, oval bar that seats about 30 customers, who can gamble at their seats on video poker and other games. An array of adjacent booths, tables, and comfy leather chairs have been added through the renovation, with more seating still to be added. There will eventually be capacity for about 300 individuals to watch any of nearly four dozen TVs, Chaudry said. 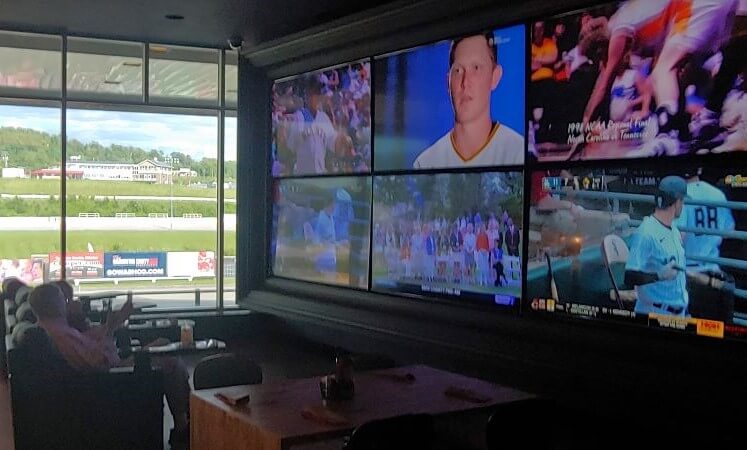 He acknowledged that many sports enthusiasts betting by phone app or computer (about 93% of Pennsylvania bettors use the online method) have enjoyed watching on their own big TVs at home with their refrigerators nearby, but said a venue like the new one at The Meadows gives them a good reason to get out of the house to have more fun watching a game while socializing.

The new sportsbook had a soft-opening period for two weeks before the restaurant section opened Thursday, and Chaudry said he could already tell it was drawing in some of the younger demographic in a part of Pennsylvania where the casino clientele skews a bit older than is the case elsewhere. Young men, in particular, are more likely to be familiar with the brash, sometimes-controversial Barstool Sports media company that uses its website and social media to promote Penn National’s betting.

Odds count more than the brand for some

While there was no evidence on a weekday afternoon of the crowded, party-like atmosphere that casino officials envision taking place on weekend evenings, football Sundays, and for other big sporting events, those who were present liked what they saw.

Mark Cobetto, a 64-year-old resident of a Columbus, Ohio, suburb, was seeing the sportsbook for the first time while pausing on a trip to Pittsburgh, and could easily imagine himself satisfied by watching games there.

“You’ve got the bar here, a place to bet, all the TVs, a nice atmosphere — a very nice setting,” Cobetto commented while having a drink and playing video poker at the bar. He’s looking forward to something similar near him next year at Hollywood Casino Columbus, also owned by Penn National, once legal sports betting commences in Ohio.

As for whether the Barstool brand — heavily promoted with signage and logos all around him — was a draw, Cobetto had never heard of it.

“I don’t think I’ve got any brand loyalty to a sportsbook,” the baby boomer said. “A sportsbook’s a sportsbook, as long as it gives you decent odds.”