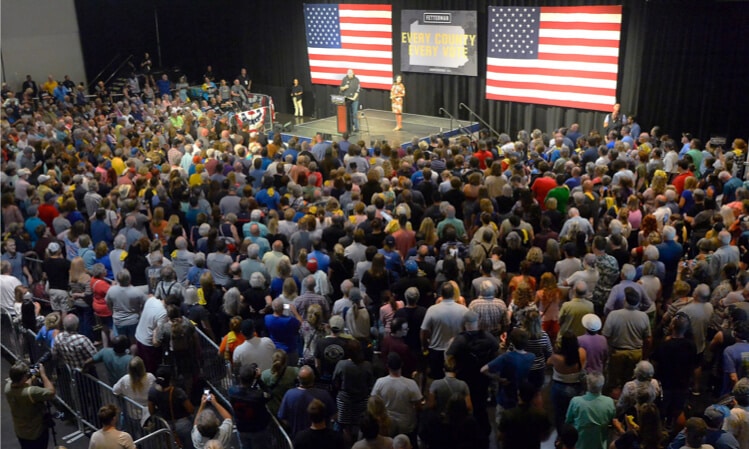 The midterm elections are a dozen weeks away, and two of the races garnering the most nationwide interest are being contested in Pennsylvania.

Among the ways to quantify that interest? Betting volume at the trading-style site PredictIt, which is being forced to pull up stakes (yes, multiple meanings intended) in February 2023, but is for now continuing to take action on all of the markets that will be decided in November.

Over the last 24 hours (as of this article’s Monday publication), the race for the open Pennsylvania seat in the U.S. Senate ranked first in trade volume among all markets. And the PA governor’s race has consistently fallen in the top 20 nationally over recent weeks and months.

It might be an exaggeration to say the eyes of the country are on Pennsylvania, but these are two highly contentious races with national implications — especially with the Keystone State having emerged in recent years as a true swing state.

It has long been a competitive state, with no presidential candidate capturing more than 55% of the PA vote since Richard Nixon won decisively with 59% in 1972. But each of the last two presidential votes were exceedingly close, with Donald Trump defeating Hillary Clinton by 44,292 votes in 2016, and Joe Biden beating Trump by 80,555 in 2020.

Pennsylvania, with its major urban areas on each side of the state and massive rural stretches in between, has become a useful indicator of whether the country is tilting to the left or the right. And according to PredictIt, it’s been swinging to the left over the last couple of months.

Republican Pat Toomey announced in October 2020 that he would not run in ’22 for a third term in the Senate, leaving a vacancy that we now know will be filled by either Democrat John Fetterman, the state’s lieutenant governor, or Republican Mehmet Oz, who has not previously held political office.

As this chart showing PredictIt’s pricing over the last three months illustrates, the race was a tossup during much of May and June, when each party’s nominees were still being sorted out. But Fetterman became the favorite in mid-June and has steadily widened his lead, even while largely staying out of the public eye as he recovers from a stroke. 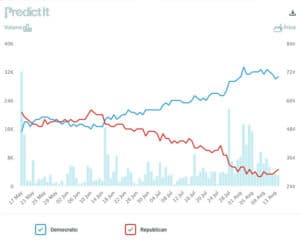 This movement in favor of Democrats is in line with national trends, and is correlated with the battle for party control over the Senate. The GOP was about a 3/1 favorite to hold at least 51 Senate seats until the odds began to close in late June, and as July ended, the Democrats took over as favorites to hold at least 50 seats (along with the presidency) and maintain the Senate majority. 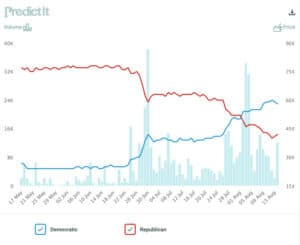 On Monday, Democratic control of the Senate was trading at 59 cents (or a -144 favorite), while Republican control was priced at 42 cents (+138 underdog). The Fetterman-Oz race could ultimately prove decisive in the race for Senate power.

The battle for governor has been decidedly less swingy. Pennsylvania Attorney General Josh Shapiro secured the Democratic nomination uncontested and has led on the odds board throughout over Doug Mastriano, a state senator in the 33rd District since 2019. While the importance of this race to Pennsylvanians is obvious, there is also high national interest because of Mastriano’s continuing efforts to contest the 2020 presidential election and his stated willingness to overturn future election results. 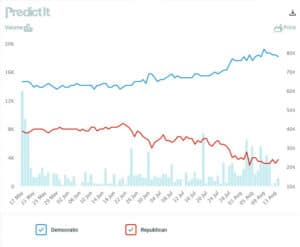 As the last couple of months have shown, general sentiment toward each party, prioritization of various issues, and overall election momentum can swing quickly. So Pennsylvania’s two critical races are far from decided, even if recent trends point toward purple PA inching in a blue direction this year.