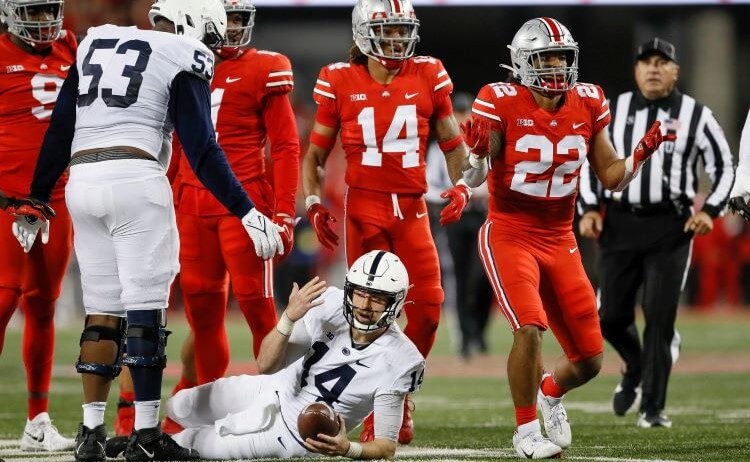 What a ghoulish Halloween weekend it was for Pennsylvania NCAA football.

Yes, Penn State fought gamely as a big road underdog and covered for bettors against Ohio State, but the Nittany Lions still lost their third straight game. That losing streak was matched by Temple, blown out – again! – at home by UCF. And as wary Pitt fans have come to learn in recent decades, that program never fails to disappoint when it’s on the cusp of potential greatness. The Panthers lost as a big favorite over Miami at Heinz Field.

So there were no treats to be consumed over the weekend for those teams and their fans. The only salve is that this Saturday they all have easier matchups to try to right their ships heading into the closing weeks of seasons that can still be satisfying, though not quite as wondrous as the possibilities seemed weeks ago.

Penn State and Pitt are big road favorites over Maryland and Duke, respectively, and while Temple is a heavy underdog visiting East Carolina, it did prove once before against Memphis that it’s capable of such an upset.

The Pennsylvania online sportsbooks have a range of betting options, highlighted below.

Penn State’s three straight defeats have been tough losses in Big Ten play, including last week’s 33-24 battle with the Buckeyes. Maryland, meanwhile, lacks any really impressive win despite starting the season 4-0. While it beat Indiana 38-35 last week, it fell by 49 points to Ohio State prior to that.

Putting those together, the oddsmakers have installed Penn State as a favorite for the game, kicking off at 3:30 p.m. local time, by as many as 10.5 points (BetMGM, Caesars) or as few as 9.5 (FOX Bet and Kambi-backed sites such as BetRivers, Unibet, and TwinSpires).  To get that smaller point spread, however, Penn State backers have to swallow inflated vig at -118.

The best moneyline return showing up for a Penn State bet is the -390 from Betfred, although FOX Bet, Caesars, and the Kambi sites aren’t far behind at -400. The over/under ranges from 55.5 points (DraftKings, BetMGM, Caesars, Betfred, Betway) to a high of 56.5 from FanDuel.

While the Terrapins are capable of good things offensively, with sophomore quarterback Taulia Tagovailoa leading the Big Ten in passing yards after throwing for 419 against Indiana, they have big problems defensively. Lions quarterback Sean Clifford, seemingly getting healthier week by week after an injury against Iowa that has been crippling to Penn State’s season, has to like the fact that Maryland has been giving up 30.4 points per game.

While the Terps won at Beaver Stadium last year, Penn State has traveled home victorious from its last 13 visits to College Park, outscoring Maryland by a combined 125-3 in the last two games there.

The bad news for Pitt (6-2, 3-1 ACC) is its 38-34 loss to Miami erased whatever slim hope existed for a College Football Playoff invite or to make Kenny Pickett the school’s first Heisman Trophy winner since Tony Dorsett, back during the Gerald Ford presidency.

The good news is it is somehow still the favorite to win its first ACC title, though not the odds-on favorite it was a week ago. The best return on the Panthers currently is the +150 from BetRivers and other Kambi sites, with FanDuel and FOX Bet offering just +120. (Wake Forest, playing in the ACC’s other division, is +250 to +350.)

The Panthers have a chance to lick their wounds at noon with a Duke team (3-5, 0-4) that actually narrowed the extent of its loss in last week’s 45-7 defeat by Wake Forest. That debacle was preceded by a 48-0 hammering by Virginia.

The sportsbooks figure the Blue Devils might be able to cut their loss by about half this time, as Pitt is a 21-point to 21.5-point favorite at the various sites. FOX Bet and Caesars offer the 21 at standard -110 pricing for those betting Pitt.

If any Panther fan wants to risk a ton of cash on a straight-up victory, the best moneyline return is -1400 from BetMGM. The over/under is 64 or 64.5. The best option for an “over” bettor is FOX Bet, offering the 64 at standard juice.

The best thing going for Duke, which is giving up 473.8 yards per game and facing a Pickett-led offense averaging even more than that, is it’s playing at home. All three of its wins have come in Durham – against some questionable opposition in North Carolina AT&T, Northwestern, and Kansas – and its one close ACC game was a 31-27 loss there to Georgia Tech.

Pitt has beaten Duke five straight times, and while Mataeo Durant has been a standout running back for the Blue Devils with six 100-yard games, Pitt’s defense against the run has been tops in the ACC.

A long month since that Memphis game

Caesars is offering the highest over/under, at 54.5 points, while FanDuel, BetMGM, FOX Bet, Betfred, and Kambi sites dip to 53.5.

That 34-14 loss to South Florida a couple weeks back was the closest Temple has come to winning since the 34-31 win over Memphis on Oct. 2.

East Carolina, which won the matchup in Philadelphia last year, 28-3, seems likely to rely on an impressive ground game averaging 162.5 yards, as the Owls’ defense against the run has been among the worst nationally. Quarterback Holton Ahlers can be expected to try to take advantage of that himself as a dual threat who ran for 78 yards against South Florida, in addition to throwing for 220.