Odds Are Against Penguins And Flyers, But Recent Play Offers Glimmers Of Hope 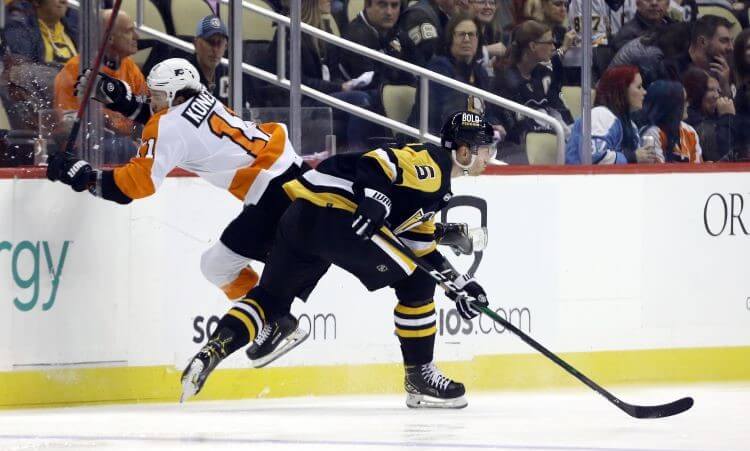 Two months into the NHL season, neither Pennsylvania team has done anything to exceed oddsmakers’ expectations, though recent trends are pointing up for both the Penguins and Flyers.

After enduring a spate of early-season injuries and illness, Pittsburgh has a four-game winning streak and has gone 9-2-1 in its last 12 games — as good as any team in the NHL in that stretch. Philadelphia, meanwhile, fired coach Alain Vigneault Dec. 6 after going eight straight games without a win. While the team is in seventh place in the Metropolitan Division and a longshot to make the playoffs under interim coach Mike Yeo, it has won its last two games — the first time that’s occurred since Oct. 27-28.

With two-thirds of the 82-game regular season yet to be played, there’s still time for plenty to change, but the timing seems right to check in on where futures odds stand for the state’s two hockey teams compared to what Pennsylvania’s online sportsbooks posted before the first puck dropped.

Pens are hot, even without Malkin

Most of the sportsbooks originally placed the Penguins second in odds behind the New York Islanders to win the eight-team Metropolitan Division, but they stood in fourth place Tuesday with a record of 14-8-5 and 33 points. That put them behind the Washington Capitals, Carolina Hurricanes, and New York Rangers. The Islanders, for their part, have stumbled to the division cellar with just 19 points.

Sportsbooks now list the Pens anywhere from +600 to +1100 to win the Metro, with the latter number available from sites using Kambi odds like BetRivers, Unibet, and TwinSpires. (Those sites make the first-place Hurricanes +140.)

To win the Stanley Cup, Pittsburgh ranks about 12th or 13th in odds among teams. Most sites list the team between +2200 and +2500, but a Pens believer betting with Caesars can get a far better payout of +3500. Those championship odds give coach Mike Sullivan’s squad a slightly worse chance than the +2000 to +3000 that existed in early October.

Under the NHL’s playoff format, the Penguins would currently be the seventh-seeded team among eight in the Eastern Conference. FanDuel recognizes that by making them -400 to make the playoffs at season’s end, with +280 to bet against them. (DraftKings makes the yes -500 and the no +380.)

While the team’s overall performance hasn’t been stellar, oddsmakers are recognizing how well they have played of late, even without any contribution from longtime star Evgeni Malkin, who has been out due to preseason knee surgery.

Franchise cornerstone Sidney Crosby has also missed 12 of the Pens’ 27 games, but he has been healthy of late and shown no deterioration, with four goals and 10 assists in the team’s last 13 games. The team’s leading scorer has been Jake Guentzel, with 15 goals and 27 points.

One surprising facet of recent success — particularly for Pens fans distraught earlier this year by his perceived meltdown in the playoffs — is that goalie Tristan Jarry has been among the league’s best, with a 1.92 goals-against average and .934 save percentage. He’s been a key reason the Penguins are giving up just 2.44 goals per game, third best in the NHL.

The team is on home ice Tuesday night as a -300 favorite at DraftKings, Caesars, and Betfred over the lowly Montreal Canadiens.

There were only modest preseason expectations for the Flyers, who were generally pegged sixth in the Metro Division by odds. But with a record of 10-12-4 and 24 points, they are above only the Islanders in the division. A woeful skid in late November and early this month led to the sacking of Vigneault and his assistant, Michel Therrien.

Philly lost its first two games under Yeo, but out of nowhere had a successful trip out West last weekend in beating the Vegas Golden Knights and Phoenix Coyotes. The win in Las Vegas Friday night was the team’s first since Nov. 16.

There’s been a lot of underachieving both offensively and defensively for the Flyers, despite longtime captain Claude Giroux maintaining his stellar play with 10 goals and 23 points. Overall, the team has ranked 27th in scoring and 24th in power play success.

While Philadelphia is by no means eliminated from the playoff picture, the substantial climb ahead has DraftKings offering odds of +650 for the team to make the postseason. A successful bet on the Flyers to somehow come back and win the division would net a reward of 120/1 from FanDuel.

The oddsmakers figure they could actually start on that path Tuesday night, as the Flyers are a home favorite over the New Jersey Devils, who are just a point ahead of them in the standings. The best price for a Flyers bettor on the game’s moneyline is the -117 from BetRivers and other Kambi sites.