The Eagles, Steelers, and their opponents all won their openers, but they can't all remain undefeated 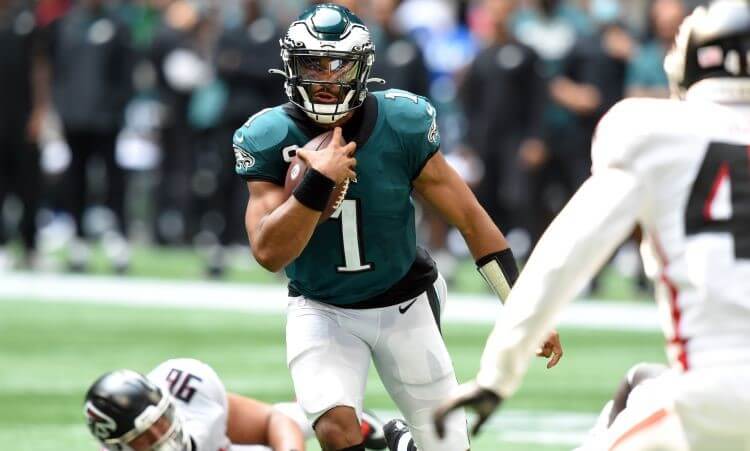 There are just three NFL games Sunday that match undefeated teams, and two of those games will be played in Pennsylvania after Week 1 upsets by the local teams.

The Eagles, who are surprisingly perched atop the NFC East for at least one week, are a home underdog vs. the San Francisco 49ers by about the same small amount as they were last week, when they thrashed the Atlanta Falcons on the road. Meanwhile, the Steelers used a dominating second half to pull their own surprise against the favored Buffalo Bills last Sunday, and now Pittsburgh is about a touchdown favorite at Heinz Field while hosting the Las Vegas Raiders.

There were a lot of happy football-loving Pennsylvanians last weekend, whether sports bettors or simply fans. All three NCAA Division 1 programs won and covered, as did the two NFL teams. Congratulations if you had that five-team parlay of the Eagles, Steelers, Penn State, Pitt, and Temple.

Is anyone rolling the dice on that happening again? It seems unlikely, but let’s go ahead and analyze the odds for Sunday’s games offered by the state’s legal online sportsbooks.

Not many — other than in the Eagles’ locker room, perhaps — saw that 32-6 win over the Falcons coming.

Jalen Hurts was awesome, throwing for 364 yards and running for 62 more. DeVonta Smith looked well worth that first-round pick, with six catches for 71 yards, including a TD. The defense allowed just 59 yards in the second half as Hurts & Co. put the game away.

And yet, the oddsmakers are doubters, considering the 49ers are a much stronger team than Atlanta. The Eagles are 3-point underdogs across the board, with BetMGM and Betfred the best places to bet on them Friday morning, with each book offering reduced vig at -105.

The point spread was wider earlier in the week — as much as 4 at BetRivers, Unibet, and other Kambi-backed sites — and may have narrowed at least in part due to the 49ers’ many injury problems. San Francisco won in Detroit, 41-33, in its own opener, but injuries in that game on top of those prior have cost it a starting running back, linebacker, and one or more cornerbacks.

The 49ers are still full of weapons, however. Jimmy Garoppolo threw for 314 yards vs. the Lions, with wideout Deebo Samuel responsible for 189 of those on nine catches. George Kittle is back at tight end after catching 15 passes for 183 yards against the Eagles in a 49ers win in California last year. But this game is apparently a more even matchup now than it was a couple of weeks ago, and Eagles fans filling Lincoln Financial Field for the first time in two years would be just as thrilled as Nick Sirianni to see the new coach start his Eagles career 2-0.

The moneyline for the game has narrowed to where the +140 offered by Caesars Friday morning was the best return available on another Eagles upset. The points total over/under — appropriate in this case for playing the 49ers — is either 49.5 (FanDuel, FOX Bet, Kambi sites) or 49 (DraftKings, BetMGM).

It’s not the old Steelers-Raiders rivalry, but …

In the first half last week, the Steelers hardly looked like a team that would upset a Super Bowl contender, but they overcame a 10-0 deficit in Buffalo to win 26-20. The victory came primarily through the kind of longtime tenacious Steelers defense that will presumably have the “Defense! Defense!” roars echoing through Heinz Field in playing the similarly surprising Raiders Sunday.

While Las Vegas pulled off a stunning 33-27 win against the Baltimore Ravens on Monday Night Football, they’re traveling across the country on short rest, making it all the more challenging to upset a second straight AFC North foe. The point spread for the game widened during the week, with the Steelers becoming mostly 6.5-point favorites as of Friday morning. A smart line-shopper backing the Steelers would only have to give 6, however, with Caesars or Betfred.

Those betting Pittsburgh on the moneyline would be best off with the -250 offered by BetMGM or a Kambi site. The over/under on points dropped a bit during the week, landing at as little as 46.5 at FOX Bet, while most sites are using 47 or 47.5.

There was a time nearly a half-century ago when a Steelers-Raiders matchup represented the most heated rivalry in the NFL. The teams met in the playoffs five straight years from 1972-76, with the first of those containing the “Immaculate Reception,” which Raiders QB Derek Carr, like many of his team’s fans, claims was bogus.

Asked about the Raiders-Steelers' historic rivalry, Carr said, "the ball touched the ground."

It’s a little different today, but both teams have a chance to use a second straight win to thrash modest expectations. Hurting the Raiders’ upset chances is they’ve lost the last six times they’ve played a road game after appearing on MNF. On the other hand, they’ve beaten the Steelers in five of their last seven meetings, even though Pittsburgh has typically been favored.

The Steelers’ opportunistic D – it took T.J. Watt all of one game to get two sacks — will have to figure out a way to stop Raiders tight end Darren Waller, who hauled in 10 passes on 19 targets while Carr threw for a league-high 435 yards in Week 1.

Meanwhile, 39-year-old Ben Roethlisberger was graded the worst QB in the league last week by Pro Football Focus, but he avoided mistakes while letting the defense take credit for the win. A possibility is more emphasis will be given this week to rookie running back Najee Harris, who started his NFL career slowly (16 carries, 45 yards, vs. Bills), but now faces a defense that gave up 189 rushing yards Monday night.