Tables — And Odds — Have Turned Against Pitt, Penn State In This Week’s Bowl Games 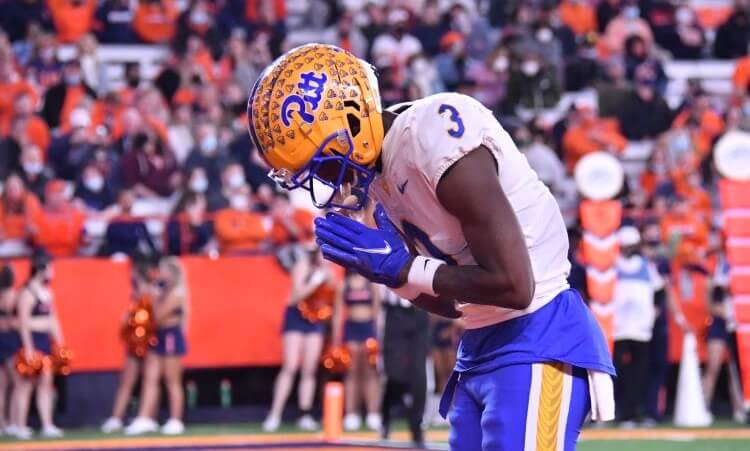 Pitt and Penn State started out as favorites to win the Peach Bowl and Outback Bowl, respectively, but that was before opt-outs by their biggest stars had oddsmakers at Pennsylvania’s sportsbooks doing a double-take.

With Pitt losing quarterback Kenny Pickett to preparations for the NFL draft, it has turned into an underdog against Michigan State Thursday night, even though the Spartans will be missing their own biggest star — running back Kenneth Walker III — for the same reason.

Penn State, meanwhile, has been shifted from a small favorite to small underdog against Arkansas for its game at noon Saturday. The Nittany Lions will be missing one of the nation’s top receivers in Jahan Dotson, plus a bevy of keystones of their usually staunch defense.

Such opt-outs have become commonplace during the NCAA’s bowl season, but the two Pennsylvania schools seem to have been impacted more than most (their two opponents included). By now, at least, their lineups for this week’s games should be well set, so odds listed below seem more likely to last until game time.

A Patti replaces a Pickett

When Pickett led Pitt to its first ACC championship with an 11-2 record and 45-21 win over Wake Forest in the title game, it wasn’t immediately known if he would back out of playing in the Peach Bowl. That announcement came later in the month, after Pitt also lost its offensive coordinator, Mark Whipple, who is assuming the same position at Nebraska.

So instead of using the ACC Player of the Year who set Pitt records galore while amassing 4,319 passing yards and 42 TDs on the season, coach Pat Narduzzi will rely on Nick Patti. The backup saw action in six games this year and threw 14 passes. He completed 12 of them, so at least he’s got that going for him.

When the Pitt-MSU pairing was announced for the game in Atlanta, which kicks off at 7 p.m. on ESPN, the online sportsbooks opened the 13th-ranked Panthers as favorites by 3.5 to 4.5 points. That’s great for anyone who got early action on No. 11 Michigan State (10-2), as by Wednesday morning the Spartans had become favored by nearly that much instead. The spread ranged from 2 to 3 points, with the latter, more favorable option for Pitt bettors available to those willing to pay extra vig of -115 to DraftKings or Betway.

Those two sites, along with BetMGM, also offered the best moneyline return for a Pitt win at +120. The points over/under, which opened above 62, has dropped to just 55.5 or 56. The “over” on 55.5 can be bet with no extra vig at BetMGM, FOX Bet, and Betfred.

The best thing Patti has going for him is the Panthers retain the services of Biletnikoff Award winner Jordan Addison, who caught 93 passes for 1,479 yards and 17 TDs and will return next year. The Panthers will also have intact most of their defense, which was sixth best in the nation against the run and terrific at pressuring quarterbacks.

Without Walker, who ran for 1,636 of Michigan State’s 2,227 total rushing yards, Spartans quarterback Payton Thorne might go to the air more. Lucky for him, he’s got a pair of dynamic receivers in Jayden Reed (eight TD receptions plus two punt return TDs) and Jalen Nailor (18.9 yards per catch) to help with that.

A lot of backups playing for PSU

Penn State went on a sour skid at season’s end to post a disappointing 7-5 record, while No. 22 Arkansas (8-4) had its best season in years, happy to claim a spot in its first bowl game since 2016. The teams meet — for the first time ever — in the Outback Bowl in Tampa at noon Saturday on ESPN2.

The opening line favored the Nittany Lions by 2.5 to 3.5 points. On Wednesday morning, most sportsbooks made the team a 1-point underdog, but a better option for a Penn State backer existed with BetMGM’s 1.5-point spread.

FanDuel, DraftKings, FOX Bet, Caesars, Betway, and Betfred were all offering even money on the moneyline for a Penn State victory. The over/under was generally 48 to 48.5, but BetRivers, Unibet, TwinSpires, and other sites using Kambi odds were more tempting for “over” bettors, posting 47.5 with a little extra juice at -113.

The odds shift came as a result of not just Dotson opting out — with his 91 catches for 1,182 yards and 12 TDs — but key members of every part of the defense: All-Big Ten lineman Arnold Ebiketie, linebackers Ellis Brooks and Brandon Smith, and safety Jaquan Brisker, a second-team All-American.

Arkansas is itself missing its top receiver, Treylon Burks, and defensive sacks leader, Tre Williams, but the Razorbacks’ successful season came more so from their rushing attack, led by dual-threat quarterback KJ Jefferson. Their 217 yards per game on the ground was second best in the SEC and 12th best nationally.

While veteran quarterback Sean Clifford will be behind center for Penn State, the Lions’ sometimes-somnolent offense could suffer from Dotson’s absence if they have to rely more on the run. Their 106.4 rushing yards per game ranked 118th out of 130 FBS teams, with a platoon of backs who averaged just 3.1 yards per carry.