Oddsmakers Like Steelers’ Chances Against A Seahawks Team Without Russell Wilson

Pittsburgh's timing is good in facing Seattle, even if it's not the best for prime-time football viewers 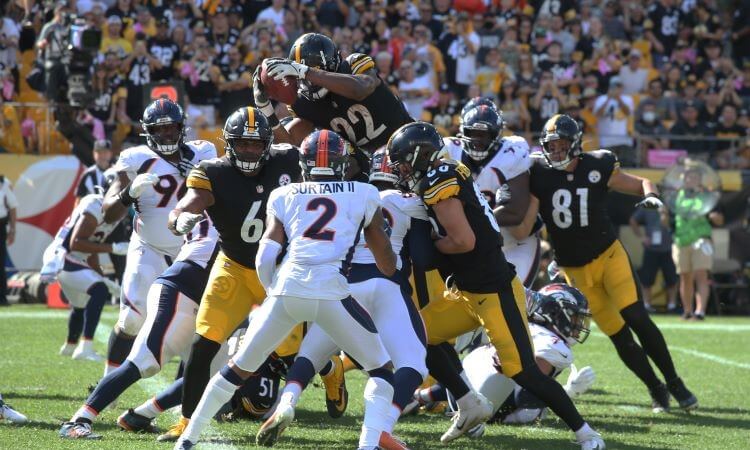 The Sunday night matchup between the Seattle Seahawks and Steelers must have looked a lot more appetizing to NBC and the NFL when Russell Wilson was healthy and Ben Roethlisberger didn’t move like a grandpa.

Instead, a prime-time audience of football fans and bettors will get Geno Smith at quarterback for Seattle and an immobile Roethlisberger in the twilight of his long career.

One of these currently 2-3 teams will leave the game at Heinz Field with a sliver of hope intact for its season, and the other will be looking at two-plus months with little hope of catching other teams in a tough division. The oddsmakers at Pennsylvania’s online sportsbooks suggest the team with hope alive when Sunday night’s clocks strike midnight will be the Steelers, who were mostly 5.5-point favorites as of Friday morning.

A touch of optimism emerges in Pittsburgh

Pittsburgh is coming off a 27-19 win over the Denver Broncos that revived some hope about the team’s sleepy offense. Roethlisberger and his inexperienced offensive line cut down on turnovers and sacks, while rookie running back Najee Harris got loose for a season-high 122 yards rushing for what had been the NFL’s worst running game. (They’re all the way up to 31st now, ahead of the Miami Dolphins.)

The Seahawks, meanwhile, last played Oct. 7 in a 26-17 loss to the Los Angeles Rams that has given coach Pete Carroll lots of time to contemplate how to navigate life without Wilson for at least a month. The quarterback’s finger injury sidelined him for the first time in nearly a decade, putting the offense in the hands of Smith, who is four years removed from his last start.

The oddsmakers size up the scenario and make the Steelers nearly a touchdown favorite. Caesars and Betfred offer the best advantage to Pittsburgh’s backers by making the team just a 5-point favorite instead of the 5.5 common elsewhere. Caesars also offers the best moneyline return for a Steelers win at -220, though BetMGM, FOX Bet, and BetRivers aren’t far behind at -225.

The game has the lowest points over/under of any on the NFL’s slate this week, with many sites — including FanDuel and DraftKings — setting the total at 42.5. BetMGM is the highest, at 43.5.

That low points total might make sense considering the Seahawks’ reliance on a backup journeyman quarterback, but it’s also quite a slap at the Steelers’ offense, considering what Seattle’s defense has been like.

The Seahawks have been giving up over 400 yards per game, including 450-plus in their last four contests. The Steelers, however, haven’t amassed 400 yards of offense in any game, so it’s a question of which team’s ineptitude is more evident at Heinz Field Sunday night.

DraftKings was ahead of competitors in posting player props Friday morning, and it listed the over/under on Roethlisberger’s passing yardage at 256.5, compared to Smith’s 224.5. If Harris’ performance against the Broncos was no fluke, he could burst past his over/under of 71.5 rushing yards. Before that game, however, his highest total was 62.