Pennsylvania casinos experienced a very modest decline to their slot revenue in 2017, but help, by way of satellite and online casinos is coming.

With 2017 over and the Pennsylvania Gaming Control Board releasing the final reports for last year’s revenue, a more accurate picture of the status of slot machines at land-based casinos has emerged.

Yearly revenues have technically continued to drop for yet another year, but the overall figures are very promising.

While technically any loss is disappointing, the Pennsylvania casino market has little reason to worry about only a 1.4% decline in slot revenues from 2016 to 2017.

Not only is the difference negligible, but the trajectory over the course of the year indicates a definite levelling trend after several consecutive months of decreasing revenues: the first eight months of the calendar showed minor year-over-year losses but three of the last four months, including last month demonstrated small gains from 2016.

Also, the only month that significantly underperformed compared to the year before was February (4% drop), which last year had a leap day making it 3.5% longer than in a typical year. Accounting for the addition day, the daily average revenues for February of 2017 actually only represented a 0.5% loss, while the yearly figures only dropped by an adjusted 0.7% from 2016. 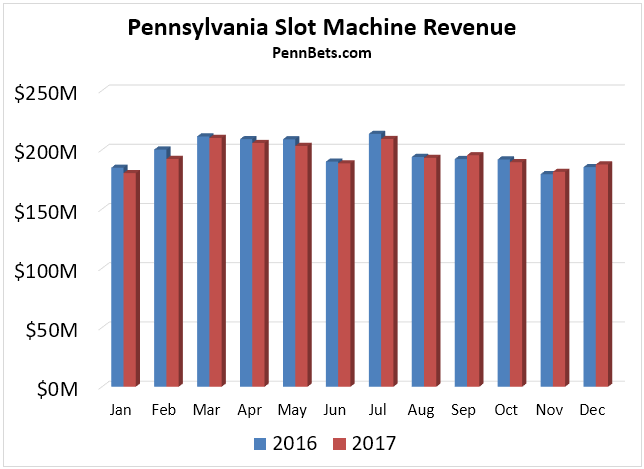 With Pennsylvania still the second-place casino market in the country and total annual slot revenues still over $2.3B, this change is definitely not a cause for concern.

Looking closer at the individual casinos, there is no specific trend to account for the minor losses:

The small losses in slot revenue were also offset somewhat by impressive year-over-year gains in table game revenue, which were up every month last year except in February — but adjusting for the leap day the drop was less than 1%.

Unfortunately table games take a backseat to slot machine action, representing only about 28% of casinos overall gaming revenues. Despite this, the felt game gains were large enough that total monthly gaming revenue in August and September showed 2.5% and 3.9% gains over the same months in 2016.

Looking further, 2018 should be more of the same — with slot revenue remaining relatively stable or declining slightly. Significant gains in 2018 aren’t very likely, as the first satellite casinos shouldn’t flip over the open sign until at least another year. When that happens, the upside is tremendous. Why? Because the state boasts more than 25,000 slot machines in its current casinos, but the forthcoming satellite casinos could increase that number by another 3000 to 7500 machines.

Some concerns have been expressed that the legalization of online casinos could potentially bite into the brick and mortar casino market, but traditionally that has not been the case in other states.

If anything online gaming has had a small positive effect on real-world casino revenues in neighboring New Jersey. Thanks to the heightened marketing awareness from the launch of the first sites and cross-promotional rewards programs between the online and b&m locations, the launch of these sites is likely to be an additional driving force of slot machine traffic in the state.

So if land-based slot machine revenue does surge in 2018, online might just be part of the reason.