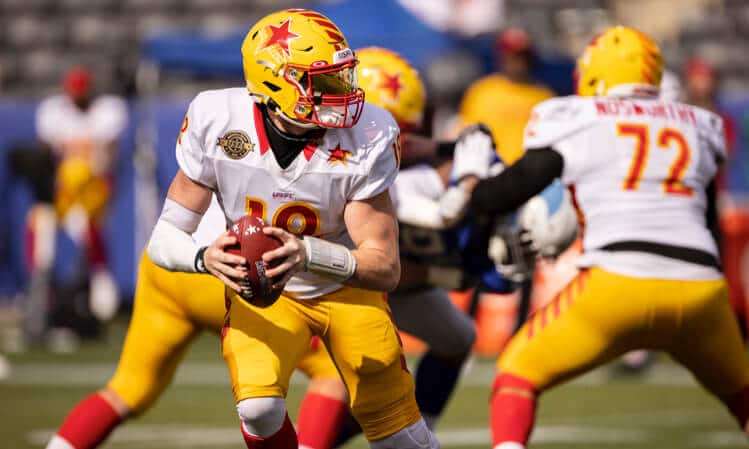 The latest NFL season came to an unceremonious close for Pennsylvania’s two teams — the Steelers and Eagles, both 7-seeds, lost by a combined 37 points on Jan. 16 in the wild card round — and the opening week of the relaunched USFL’s season failed to get either Pittsburgh’s or Philadelphia’s football squads off the schneid.

But in Week 2, someone’s “O” has to go. The Philadelphia Stars “host” the Pittsburgh Maulers Saturday at noon (all USFL games are played in Birmingham, Alabama, hence the quotation marks around “host”) and one of these 0-1 teams will improve to 1-1, while the other remains in the league basement.

The oddsmakers at PA’s legal sportsbooks all agree that the Stars are the team more likely to finish the weekend at .500. Every book that has posted a spread on the game has Philly as a 6.5-point favorite, a particularly precarious number in a league in which post-touchdown options include 1-point, 2-point, and 3-point conversions.

It’s no surprise the Stars are favored. They lost narrowly to the New Orleans Breakers in Week 1, 23-17, after rallying from an ugly 9-0 hole to tie the game at 17 entering the fourth quarter. The Maulers fell behind 17-0 against the Tampa Bay Bandits on Monday night and the best rally they could muster was to narrow the score to 17-3 by the final whistle.

Both teams were underdogs in their openers, the Stars by 2.5 points and the Maulers by as much as 6, and neither covered the spread.

We've got you covered ✅

Here's every single touchdown from Week 1 of our inaugural season 🏈 pic.twitter.com/UGQMZCCroW

Looking for a silver lining to those 0-1 records, Stars or Maulers fans? The teams that defeated the Pennsylvania pair in Week 1 are the two betting favorites for the USFL title. The Bandits have the shortest odds, at +340 at FanDuel, +330 at DraftKings, and a mere +300 at such Kambi-affiliated books as Barstool, BetRivers, Unibet, and Parx. The Breakers are close behind, from +450 at DK and the Kambi operators to +430 at FD.

Unfortunately (or fortunately, if you’re looking for a juicy number at which to bet them), the Stars and Maulers are among the bottom three in title odds at all books. FanDuel prices the Stars and the New Jersey Generals at +850 and the Maulers at +900, DraftKings has the two PA teams at +800 and Jersey at +900, and Kambi separates them with the Stars at +700, the Generals at +800, and the Maulers at +1000 in the eight-team league.

Pittsburgh’s long odds may well prove justified. The Maulers were already among the USFL’s most lightly regarded teams when coach Kirby Wilson, a running backs coach in the NFL for 23 years, cut his theoretical star RB, De’Veon Smith, shortly before Week 1 due to Smith allegedly breaking three team rules.

The Maulers tried a quarterback platoon in Week 1, with former New York Giants fourth-round pick Kyle Lauletta sharing time with Josh Love. Lauletta went a dismal 2-for-10 against Tampa Bay and was easily outshined by Love, who completed 9 of 16 passes for 121 yards.

Garrett Groshek stepped into the lead RB role and produced a middling 55 yards on 16 carries. One bright spot: The Pittsburgh defense twice picked off Jordan Ta’amu, considered by many to be the best quarterback in this current USFL.

Like the Bandits, the Stars boast a relatively well-regarded QB in Bryan Scott, who was the MVP of the most recent iteration of The Spring League — and was drafted in the first round of the USFL draft by his old Spring League coach Bart Andrus. Andrus, who has also coached in the CFL, XFL, UFL, and NFL Europe, drafted with cohesion in mind by snagging two of Scott’s Spring League pass catchers, Devin Gray and Jordan Suell, as well as RB Darnell Holland.

The results in Week 1 weren’t bad, if you’re willing to overlook the pick-six Scott threw to put the Breakers on the board and the blocked-punt safety that made it 9-0 New Orleans. Scott finished 25-of-36 for 202 yards, with 1 TD and 1 INT, while Holland rushed nine times for 52 yards and a score — most of that production coming all at once:

NOTHING BUT DAYLIGHT 🤩@yocrazylegs for 42 yards to paydirt!

Sacks, however, were a deeply worrying stat for Philly. Scott was dumped behind the line of scrimmage six times, while the Stars defense didn’t produce a single sack.

With both teams limping out of the gate, it follows that the over/under lines for the Stars-Maulers point total are low. Like, really low. Every other game on the board in Week 2 is either 40.5 or 41.5 (low numbers themselves in this league full of castoffs and burnouts), and for Stars vs. Maulers, the bookmakers have deducted about five additional points.

FOX Bet, which tends to be the first to post USFL lines and which is connected to the USFL ownership group and broadcaster, had the line at 37.5 at midweek, as did the Kambi books. FanDuel went lower at 36.5. And PointsBet PA and DraftKings both pegged the total at a mere 36.

* Throw rates were truly pathetic (as expected) for most teams

On the moneyline, the best price for a Stars victory is -275 at both FOX Bet and DraftKings, whereas FanDuel has Philly as a healthy -300 fave. It follows that FanDuel is the best book at which to bet on the Maulers to pull off the upset, offering a +250 moneyline, while the other operators range from +205 to +225.

After a messy Week 1 of USFL DFS at DraftKings, Week 2 pricing is posted and offers some insights on individual player expectations. Scott is the fourth most expensive QB on the slate at $9,600, followed closely by Lauletta at $9,400. Love is a potentially massive bargain at just $6,100 — the second-lowest price at the position — if Wilson decides to give him the bulk of the work on Saturday.

Holland is the second most expensive RB at $8,200, while Groshek carries a $7K price tag. Speedy Pittsburgh receiver Jeff Thomas is third among WR prices at $9,100 despite a modest 4-43-0 line in Week 1, while Stars wideout Chris Rowland, who impressed with 7 catches for 74 yards against New Orleans, looks like a steal at just $3,400.

That zero-sacks Stars defense is priced the cheapest of the eight USFL teams at DK at just $3,500, while the Maulers D is a tad more expensive at $4,100. The Breakers defense that scored a touchdown and sacked Scott six times broke the DFS slate last week, and if the Philly offensive line is as vulnerable as it appeared, Pittsburgh’s defense could rack up fantasy points.

Nostalgia may play, at least in one PA city

Philadelphia football fans who were alive in the first half of the 1980s may have an emotional attachment to the Stars name and logo, even if this year’s team isn’t playing any of its games locally. The Stars were unquestionably the most successful franchise in the USFL’s first iteration, reaching the championship game in 1983, winning the title in 1984, and winning it again in 1985 after relocating to Baltimore before the league went bust.

During the three years, the Stars went 41-12-1 in regular-season play and 7-1 in the postseason.

Those teams featured future NFL notables Sam Mills, Sean Landeta, Bart Oates, and Irv Eatman and were coached by the man with whom the word “playoffs” will forever be associated, Jim Mora.

Pittsburgh fans likely don’t have the same lingering attachment to the Maulers. They played just one season in the USFL, 1984, and despite snagging Heisman winner Mike Rozier with the first pick in that year’s draft, finished tied for last place at 3-15. Their lone season is perhaps best remembered for the Three Rivers Stadium boos showered upon ex-Steeler Cliff Stoudt.

It’s early, but the 2022 Maulers are on track to carry on the losing tradition of their 1984 namesake. The Stars face a tall task to equal the winning ways of their predecessors, but if they’re to have any chance of doing so, they need to prevail in Saturday’s intrastate (while played out of state) battle.