Flyers disappointed in regular season and Penguins in postseason, and both hope for better 2021-22 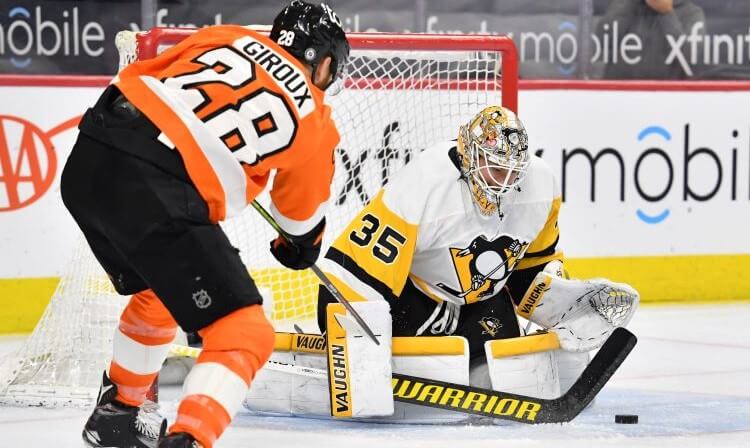 The NHL season gets underway for Pennsylvania’s two franchises this week, with preseason expectations rather modest after the Penguins fell on their collective face in last season’s playoffs and the Flyers disappointed even more by missing the postseason.

Pittsburgh will help open the 2021-22 season for the entire NHL in Tampa Bay Tuesday night, playing the defending champion Lightning without longtime stars Sidney Crosby and Evgeni Malkin on the ice, due to each recovering from surgeries.

Philadelphia has a rebuilt team, meanwhile, especially on defense, that will be showcased when hosting the Vancouver Canucks at the Wells Fargo Center Friday night. The Flyers will also be missing a key player recovering from surgery, center Kevin Hayes.

So the Pennsylvania teams will have some challenges early in the season as they seek to exceed the odds listed by the state’s many online sportsbooks. The Penguins could defy expectations by at least winning the Metropolitan Division, considering most betting sites currently rank them second behind the New York Islanders. The Flyers could reward their backers just by making the 16-team playoffs, as many of the books make them a slight underdog to do so.

It’s been a long time now since Pens went far

The Penguins, now four years removed from winning two straight second Stanley Cups with some of the NHL’s biggest stars, return with most of last year’s 37-16-3 squad intact. But with age come more health issues, so they are facing delays in use of the two franchise cornerstones, amounting to a few games for the 34-year-old Crosby and a couple of months for 35-year-old Malkin.

Even with those two, the Pens have suffered from flameout after flameout in the playoffs in recent years, including the most recent first-round loss to the Islanders after Pittsburgh exceeded regular season expectations to win the East Division in the truncated COVID season.

With the NHL back to its 82-game schedule and normal divisional format in 2021-22, the sportsbooks are setting odds that for the most part place Pittsburgh as anywhere from seventh to 10th most likely to win the Stanley Cup.

The Colorado Avalanche are universally the Cup favorite, at anywhere from +475 (DraftKings, Betway) to +600 (BetMGM) with the Lightning and Vegas Golden Knights close behind.

The Penguins are no better than +2000, or 20/1, at most books, and for any believer in a reversal of recent fortune to a long postseason run in the spring, the best online choice would actually be Betfred, an outlier with odds of 30/1.

While most of the sportsbooks place the Penguins behind just the Islanders in the division, there’s better value using BetRivers, Unibet, or one of the other sites using Kambi odds, as their +550 price also puts the Pens behind the Carolina Hurricanes and New York Rangers.

Futures bets can also be placed on the team’s season points over/under and chance of making the playoffs. The best options for those for a Penguins backer would be any of the Kambi-backed sites (which also include Parx, Barstool, TwinSpires, and PlaySugarHouse) to bet them over 94.5 points and -162 to make the playoffs, as other sites have them as an even bigger favorite.

Other than the issue of age, which also comes into play with other top players of theirs like defenseman Kris Letang and center Jeff Carter, the biggest question mark for Pittsburgh seems to be its goaltending. The team will lean on Tristan Jarry again, even though his performance was heavily criticized during the playoff loss to the Islanders, and he is again backed up by Casey DeSmith.

While Crosby and Malkin are out, the team will be depending a lot for offense on other players like Carter, free agent acquisition Brock McGinn, and Jake Guentzel, who has been a high-scoring forward for several years, with 57 points in 56 games last season.

Guentzel is the Penguin showing up most often in individual player prop futures bets offered by the sites, with a pretty wide range between FanDuel, which puts his over/under on points at 71.5 (-114 on the over) and DraftKings, which uses 76.5 (+100 on the over).

Up to a point, the Flyers seemed to be as good last season as the favorable projections for them had been, but then they went 14-19-5 after March 1. That came with the worst goaltending stats in the league, rather inexplicably considering young Carter Hart in net had been deemed one of the team’s strengths.

Hart, 23, will be in goal again, with hopes he suffered a one-year aberration, while veteran Martin Jones has replaced Brian Elliott as his backup.

General Manager Chuck Fletcher largely cleaned house on the rest of the defense, meanwhile, with one of the attention-getting moves being trading away the team’s first-round draft choice to acquire defenseman Rasmus Ristolainen.

There’s a large contingent of other new defensemen to supplement the returning Ivan Provorov, while the Flyers return a solid offensive core in Claude Giroux, Sean Couturier, and Hayes, once healthy.

Whether any of the changes will result in the Flyers giving up fewer goals was evidently on the minds of the oddsmakers in mostly making the team no better than 30/1 to win the Stanley Cup. The biggest pessimists in that — and thus the best sources for a Flyers optimist — are DraftKings and Betway, which are offering 40/1.

In the eight-team Metropolitan Division, everyone has the Flyers pegged sixth in the odds. The best regular choice would be the 9/1 odds from DraftKings and Betway, but Parx has been posting a Flyers “Future Special” at 10/1 instead of the regular Kambi price on them of +650.

Most of the sportsbooks list an over/under of 92.5 on the team’s season points total. The best price to get on its chance of making the playoffs is the +105 offered by DraftKings, BetMGM, and Betway.

For player prop options, FanDuel can be used to bet Couturier over/under 65.5 points on the season and Giroux over/under 56.5.