Penguins Have Been Moving Up In Futures Odds, Even With Recent Cooling Off 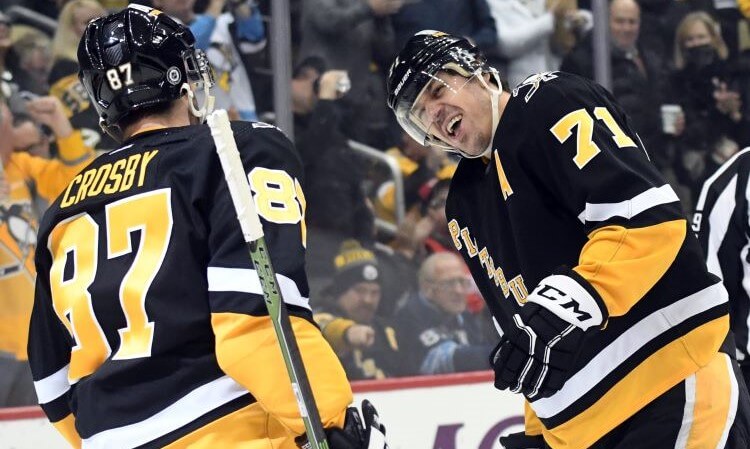 The Penguins were red hot from November to mid-January, then cooled off just like recent temperatures, but oddsmakers have recognized them as a potential force in the spring by slashing their futures odds.

A veteran team still loaded with key stars of prior Stanley Cup winners had odds as long as 35/1 in mid-December to win another title, but the best payoff now among Pennsylvania’s online sportsbooks is the 16/1 from FanDuel, BetMGM, and the multiple sites using Kambi odds, including BetRivers, Unibet, and TwinSpires.

That improvement in the Pens’ chances of going far stands even though Pittsburgh has gone 0-2-1 in three home games at PPG Paints Arena since Thursday.

The oddsmakers seem more affected by what preceded the downturn — a six-game winning streak and an impressive run of 17 victories in the course of 19 games.

Now the Penguins are favored to get back on track in taking on the rival Washington Capitals at home Tuesday before taking a week-long hiatus that includes the NHL’s all-star break.

Even though the Penguins have looked suddenly weak in failing to beat either the Seattle Kraken, Detroit Red Wings, or Los Angeles Kings at home, they are near full strength, unlike most of the season. They finally got Evgeni Malkin back from offseason knee surgery Jan. 11 to reunite him with captain Sidney Crosby and star defenseman Kris Letang as the aging but still-productive core remaining from the back-to-back Stanley Cup champions of 2016 and 2017.

There has been speculation that the recent slowdown — which quickly ended a brief status atop the Metropolitan Division point standings — could be chalked up to fatigue. Sunday’s loss to the Kings represented their seventh game in 11 days, and the timing of the all-star break may be particularly fortuitous for Pittsburgh.

It is a team that before the season started was viewed as barely better than middle of the pack in the NHL, and they didn’t do much early in the season to change anyone’s mind about that. Solid defensive play overall and sterling goaltending by Tristan Jarry (sixth now in DraftKings’ Vezina Trophy odds at 20/1) compensated for numerous injuries to key players, however, in getting the team viewed as a contender once more.

In addition to ranking seventh now in Stanley Cup odds, they are fifth across the board in Eastern Conference-winning odds. The biggest potential payoff on that for the Penguins now is the +850 from FanDuel. The Tampa Bay Lightning and Florida Panthers are viewed as the two strongest teams, both around +400 or shorter to win the conference.

The sportsbooks all have the Carolina Hurricanes first in Metropolitan Division odds and the Pens second. Pittsburgh is currently in third place in the division with 61 points in 45 games, but the Hurricanes’ 64 points came in 42 games and the New York Rangers’ 62 points in 46.

BetMGM, Caesars, and the Kambi sites all list Pittsburgh at +225 to win the division, a better return than is offered by DraftKings and Betway at +200. In mid-December, the Pens’ division odds ranged from +600 to +1100.

Pennsylvania’s other NHL team, the Flyers, has fallen off a cliff meanwhile, getting 35/1 odds from DraftKings to make the playoffs while standing seventh in the Metro with a record of 14-22-8. They are a home underdog (+130 at DraftKings) playing the Winnipeg Jets in Philadelphia Tuesday night.

The Penguins host the Capitals Tuesday night in a game that features two of the NHL’s best teams from over the past decade as well as two of the league’s best players in that span.

The Caps’ Alex Ovechkin is the only active player who has reached 500 goals in his career, and the only peer on the cusp of achieving that mark is Crosby with 498. Every time those two are on the ice together — and this is their 61st meeting — it should delight hockey fans.

Pittsburgh, at 27-11-7, has overtaken Washington (24-12-9) in the standings, though the fourth-place Capitals remain almost certain to make the playoffs.

For this meeting, the Pens could be bet in the morning as a moneyline favorite of -150 at BetRivers and the other Kambi sites, which is a better return than elsewhere, with FOX Bet and Betfred making them the biggest favorite at -160.