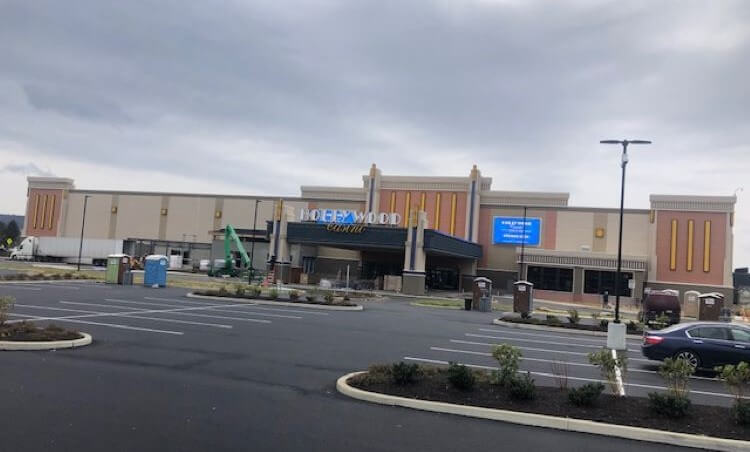 Hollywood Casino Morgantown will open to the public at noon three days before Christmas in Berks County, less than a half hour’s drive from the national company’s headquarters in the Reading suburb of Wyomissing.

The 80,000-square-foot facility, on which the company says it has spent $111 million, will complete a central Pennsylvania casino triangle for Penn National. The Morgantown venue is 50-plus miles east of both the company’s first casino, Hollywood Casino at Penn National Race Course with 1,800-plus slot machines, and Hollywood Casino York, the mini-casino that opened in August. The latter has 500 slots, and Morgantown will have 750.

Penn National also has a fourth casino in the state, the recently rebranded Hollywood Casino at The Meadows, south of Pittsburgh. Its newest venture will increase Pennsylvania’s casino total to 16.

The company has been expanding operations as a result of decisions made before anyone ever contemplated the COVID pandemic that has rattled the brick-and-mortar gaming industry.

While the pandemic slowed construction of its latest venture by several months, Penn National has shown no public second thoughts about the expansion, and a healthy start for Hollywood Casino York seems to have supported that notion. The venue on a single floor of renovated Sears space at the York Galleria earned about $7.1 million in gaming revenue in October, with 250 fewer slot machines than what the new site will have.

“I think we could say we are encouraged by the results we’ve seen from those types of numbers,” Erin Chamberlin, Penn National’s senior vice president of Northeast operations, told Penn Bets.

Two more to come after Morgantown

The state is expected to have five mini-casinos — about one-half to one-third the size of most of the state’s casinos — as a result of broad 2017 gaming expansion legislation. Live! Pittsburgh opened in Westmoreland County prior to Hollywood Casino York and two more are in the planning stages, by Parx Casino in Cumberland County and by private developer Ira Lubert in partnership with Bally’s Corp. in Centre County.

Penn National initially objected to the mini-casino concept, even suing the state over it in a legal case it eventually dropped. The company ultimately decided the best strategy was to bid on the rights to develop two of the Category 4 casinos, as they are formally known, to protect its home turf in central Pennsylvania from competitors.

Unlike the two of those mini-casinos that opened thus far in empty mall space, Penn National built Hollywood Casino Morgantown from the ground up on vacant land near the intersection of the Pennsylvania Turnpike with two other highways, I-176 and Route 10.

It is closer to southeastern Pennsylvania population centers than Penn National’s other properties and just about 30 miles west of Valley Forge Casino Resort.

At the same time, Morgantown is almost certain to divert some customers from Penn National’s own two properties about an hour away to the west, but Chamberlin said such cannibalization is not a concern.

“We fully anticipate that players, based on preferences of amenity type or location, will perhaps shift their play, but that’s OK. As long as they keep it in the Penn National Gaming ecosystem, we’re very indifferent” where they visit, she said.

“We’re actually very deliberate in telling players we welcome you to shift about, go where you feel most comfortable and have the best relationships, and we will make it indifferent [from one another] in terms of the offers you receive.”

Building it from the ground up instead of in renovated mall space gives the new venue some advantages, Chamberlin said, aside from the ability to have a full complement of the 750 slots and 30 table games allowed in the mini-casinos. It also includes a Barstool Sportsbook and sports bar and two other restaurants for sandwiches and Asian food.

Morgantown has higher ceilings and a more spacious overall feel to the layout than York, Chamberlin noted. The sportsbook is designed to accommodate many more customers comfortably for food and drink in addition to watching games, with seating for more than 150 patrons.

And in a difference from many casinos built with walls that block the outside world, Morgantown has incorporated terraces where gaming can take place — including at 160 of its slots — while customers have a sense of being outdoors.

An advantage of having the York property already open, Chamberlin said, is some of the new staff of 375 being hired for Morgantown have been able to get hands-on training at the sister mini-casino, as well as at the bigger Penn National flagship property in Grantville.

The employees at all three properties, she said, have been encouraged to feel like they are part of one joint team instead of competing with one another. It’s the same sense of complementary benefits from the multiple location, Chamberlin said, that Penn National has tried to invoke among customers.

While the company has been happy to build its data base with nearby Maryland customers crossing the state border to visit York, she said, “We’ve seen players also like having the option to go to the Hollywood Grantville property or the Hollywood York property. Any number of players live between the two.

“We’ve been pleasantly surprised to see how well it’s working. Maybe if you live closer to York, you play there on a Thursday night after work, and then on the weekend if you want a bigger experience with a steakhouse and everything, you go to Grantville.”

And on Wednesday, for any number of potential patrons, those two choices become three.