Penn State Tries To Redeem Itself While Huge Home Underdog Vs. Ohio State

All three PA schools are underdogs Saturday, with Nittany Lions the biggest in the biggest game 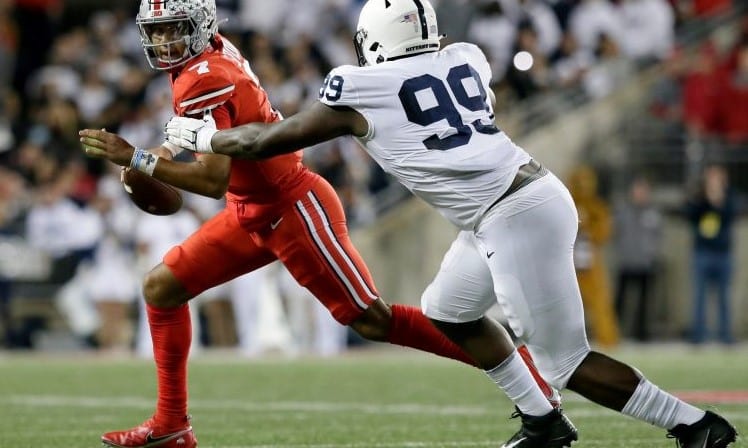 It’s rare to have a football weekend in Pennsylvania where Penn State is the biggest underdog among the three NCAA FBS programs, but it’s also not common to be playing one of the top two teams in the country.

Ohio State, ranked No. 2 behind Georgia by the AP but the favorite (+180) at DraftKings and some other online sportsbooks to win the national title, travels to Happy Valley for a showcase game against the 13th-ranked Nittany Lions at noon Saturday. The undefeated Buckeyes, who have won all of the meetings between the two schools since a Penn State upset in 2016, are favored by more than two touchdowns.

All of the Pennsylvania schools are underdogs on Saturday — just by not as much. Pitt travels to North Carolina as a field goal underdog against the No. 21 Tar Heels, while Temple is getting about two touchdowns from oddsmakers for its visit to Navy.

A successful moneyline parlay for a trio of upsets by the state’s teams would pay off at about 62/1 at FanDuel. We’re not recommending it, but we thought you might want to know as you consider the matchups below.

Penn State (6-1, 3-1 Big Ten) was on a big national stage for a game against Michigan two weeks ago, and it tripped and fell off that stage in a 41-17 drubbing in which the Wolverines ran for 418 yards.

The Nittany Lions are at home this time, though, and they have often played Ohio State (7-0, 4-0) tough under coach James Franklin even if they were on the wrong side of the score in the end.

On the other hand, after a 21-10 defeat of Notre Dame in the season opener, Ohio State has beaten everyone by at least four touchdowns. The Buckeyes have averaged 54.3 points over its last six games, and they’ve beaten opponents by an average of 34.7 points throughout the season.

The oddsmakers give Penn State considerably more credit than those prior opponents, even if not expecting the heavyweight clash to come down to the final possession (or two). FanDuel and DraftKings made Ohio State a 14.5-point favorite as of Friday morning, while BetMGM and sites using Kambi odds — such as Barstool, betPARX, and BetRivers — were better for Penn State backers with a 15.5-point spread.

For a Penn State win, PointsBet was among sites offering the best moneyline price at +450. The over/under ranged from 60.5 to 61.

One unquestionable key for Penn State will be containing OSU quarterback C.J. Stroud, the Heisman Trophy favorite (even money at FOX Bet) who leads the nation with 28 touchdown passes. In last week’s 54-10 win over Iowa, he completed 20 of 30 passes for 286 yards and four TDs.

Fortunately for the Nittany Lions, their secondary is a strength, but the defense will also need to apply pressure to Stroud in order to keep the game manageable.

Penn State righted itself after the embarrassing Michigan loss by beating Minnesota 45-17 last week, with sixth-year senior Sean Clifford named Big Ten Offensive Player of the Week after throwing for four TDs himself. Clifford may need to repeat that kind of peak performance while getting strong support from dual freshmen running backs Kaytron Allen and Nicholas Singleton to help control the clock and keep Stroud and Ohio State’s skill position stars — like running back TreVeyon Henderson (152 yards in OSU’s 33-24 win in Columbus last year) and wide receivers Marvin Harrison Jr., Emeka Egbuka, and Jaxon Smith-Njigba — on the sidelines.

Pitt looks to get in North Carolina’s way

Pitt (4-3, 1-2) pretty much had its hopes of repeating as ACC champion ruined by a 24-10 loss in Louisville, but it can provide North Carolina (6-1, 3-0) a rockier path to snatching that crown if the Panthers win at Chapel Hill in a night game Saturday.

Every other team in the Coastal Division but the Tar Heels has at least two ACC losses, meaning UNC could pretty much coast in the Coastal if it wins. North Carolina is a consistent 3-point favorite among sportsbooks.

Many of the sportsbooks had Pitt at +130 on the moneyline and most had the over/under at 65, although BetMGM  went a tad higher to 65.5.

North Carolina has won its last three games, including a 38-35 comeback win at Duke prior to a bye week. Its only loss of the season came against Notre Dame, 45-32, on Sept. 24.

The Tar Heels’ success has been driven by redshirt freshman quarterback Drake Maye, whose 24 passing TDs trail only Stroud’s number. He’s thrown for 2,283 yards with only three interceptions, while Pitt starter Kedon Slovis has had five picks in throwing for just 1,325 yards.

It was four turnovers that killed Pitt against Louisville, and the Panthers can be expected to rely on running back Israel Abanikanda, who is at or near the top of running backs nationally in multiple categories. It might help him, certainly, that North Carolina is last in the ACC in rushing defense, giving up 186.3 yards per game after allowing Duke 297 on the ground.

One thing in Pitt’s potential favor is that during coach Pat Narduzzi’s tenure, in addition to a disastrous, unexpected loss every season (like Georgia Tech this year), the Panthers always seems to have at least one big win against a ranked opponent. The question is whether that is more likely this Saturday or a week later when hosting Syracuse.

Temple again gets no respect

One interesting thing about Temple is that even when it plays teams with similar records, oddsmakers always show it far less respect. That is the case again in visiting Navy Saturday afternoon, with both teams 2-5 overall but Navy’s two wins coming in the AAC and Temple 0-3 in conference play.

An Owls backer can get as many as 14 points from PointsBet and Caesars and +450 on the moneyline from DraftKings and Betway. The over/under ranges from 40.5 to 41.

Navy lost to Houston last week, 38-20, while Temple lost 27-16 to Tulsa, a team Navy beat by 30 points earlier this month. Temple’s defense was actually stalwart against Tulsa, using two early interceptions to propel the Owls to a 10-0 lead. The offense never got on track, though, with freshman quarterback E.J. Warner able to compile just 196 passing yards on 48 attempts.

Navy is ground-heavy, running for 201 yards on 50 carries in its loss to Houston, which will challenge an Owls defense that gave up 299 yards on the ground to Tulsa.

The Owls’ last win came Sept. 24 against Massachusetts. While their series with the Midshipmen is tied 8-8 all time, Navy won 38-14 last year in Philadelphia.