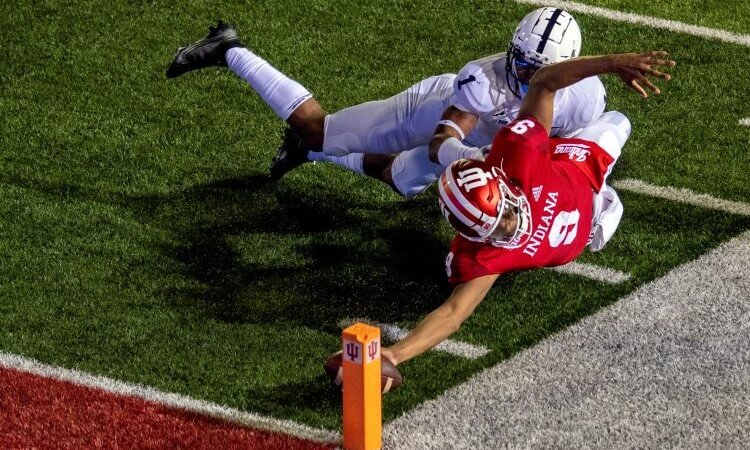 Penn State has proven itself well in nationally televised contests versus Wisconsin and Auburn so far this year, and online sportsbooks see the Nittany Lions as an almost two-touchdown favorite to do so again against Indiana Saturday night in front of a national TV audience on ABC.

Now ranked 4th by the AP, Penn State suffered a tough and controversial overtime loss against the Hoosiers last year. But Indiana has stumbled in the early going of 2021. An upset by the Hoosiers at Beaver Stadium would be a huge blow to coach James Franklin and his undefeated team, who had better not be caught looking ahead to the following week’s visit to No. 5 Iowa.

While the PSU-Indiana game is unquestionably the most noteworthy among Pennsylvania schools this weekend, Pitt and Temple start their conference schedules with a chance to help erase some early season blemishes. The Panthers visit Georgia Tech as a road favorite by about a field goal, while Temple is a double-digit underdog hosting Memphis.

Penn State ran its record to 4-0 last week with a comfortable 38-17 win over Villanova. Indiana, meanwhile, stands just 2-2 after barely surviving a scare from Western Kentucky Saturday in a 33-31 win.

One thing worth noting about the Hoosiers’ two losses is they came against Iowa and No. 7 Cincinnati, so there’s no reason for them to feel ashamed. They didn’t come close to winning either game, however, and their other win besides Western Kentucky was over lowly Idaho.

The combination of factors has the oddsmakers favoring Penn State by 12.5 to 13 points as of Thursday afternoon for its 7:30 p.m. home game Saturday on ABC. FanDuel, DraftKings, and FOX Bet are among those offering 12.5, with BetMGM and Kambi-backed sites — including BetRivers and Unibet — using the 13-point spread.

It’s hard for a Penn State backer to make much profit off the moneyline, as the best option there is FOX Bet at a payoff of -450. Most sites list the points total over/under at 53.5, but Caesars is a smidge lower at 53, making it the best option for an “over” bettor.

A lot of the faith in the Nittany Lions comes from an excellent passing game, triggered by senior quarterback Sean Clifford (86-of-120, 1,158 yards, 8 TDs, 2 interceptions), and a stingy, ball-hawking secondary that has denied opposing QBs the chance to put up any glossy statistics of their own. Indiana QB Michael Penix Jr., meanwhile, has had trouble matching his accomplishments of last year, and the Hoosier defense ranks 11th in the Big Ten in passing yards allowed. Penn State has been averaging 307.8 passing yards per game behind Clifford.

Based on all that, oddsmakers — and Nittany Lions fans — aren’t counting on any replay of last year’s dramatic 36-35 win in Bloomington by Indiana, which has fallen out of the rankings after being starting the season as the AP’s No. 17.

It should be noted, however, that Penn State has not run the ball well, and Penix did seem to right himself in throwing for 373 yards on 34-of-53 passing against Western Kentucky. No one, however, is likely to confuse the Hilltoppers’ defense with that of the Nittany Lions, who have beaten the Hoosiers all 11 times they’ve hosted them.

If not for their 41-44 pratfall against Western Michigan, Atlantic Coast Conference observers might be eyeing Pitt seriously right now, considering early season hiccups by conference favorites Clemson, Miami, and North Carolina. Instead, the Panthers still have a lot to prove in a visit at noon Saturday to Georgia Tech, which was responsible for one of those major hiccups by surprising North Carolina 45-22 at Bobby Dodd Stadium last week.

The Panthers are 3-1, but against inferior competition to that of the Yellow Jackets, who are 2-2 and lost to Clemson by a mere six points. The sportsbooks mostly see Pitt as a 3.5-point favorite, but a Pitt bettor can do better by giving just 3 with either DraftKings or Betway if they’re willing to tolerate a little extra juice.

The best Pitt moneyline price is the -160 offered by BetMGM and Betway. The points total over/under is as low as 57.5 at Caesars and on up to 59 at DraftKings and Betway.

While Pitt rolled to a 77-7 win last week in trying to soothe the sting of that Western Michigan loss, let’s not get carried by that 11-to-1 winning ratio — it came against the not-so-wild Wildcats of the University of New Hampshire. What the Panthers do have going for them, statistically, is one of the best passing games in the country, even if the opposition has been of questionable strength. Longtime senior quarterback Kenny Pickett threw for five touchdowns and more than 400 yards against New Hampshire, and the Panthers’ 386.5 passing yards per game ranks fourth nationally, making up for a substandard running attack.

The Yellow Jackets’ offensive statistics aren’t as gaudy, but the defense has been strong and they unveiled a new weapon at quarterback versus North Carolina in freshman Jeff Sims. He came off the bench to run for 128 yards and three TDs, while completing 10 of 13 passes that included another score. He represents the kind of challenge Pitt’s defense hasn’t seen much of this year in playing one of Division 1’s weaker schedules.

Whichever team wins will begin getting some serious ACC attention, certainly, after years mired in mediocrity.

Temple gets a big conference test

Temple won for the second time against a cupcake opponent by besting Wagner Saturday, 41-7, while Memphis’ three-game win streak to start the season came to a surprising halt at the hands of UTSA, 31-28.

The noon kickoff at Lincoln Financial Field is the opening to the American Athletic Conference schedule for both, with far bigger things imagined for Memphis than for the Owls. Despite playing at home, Temple is a 10-point underdog, at minimum. That number – the best to use for a Temple bettor – comes at DraftKings and Betway, with other sites going as high as 11.5 for the spread.

An upset by the Owls would result in a moneyline payoff of as much as +350 at BetMGM and Caesars. The over/under is set as low as 59 by Caesars, with some others at 59.5 and DraftKings, BetMGM, and Betway all using 60.

In Temple’s favor, it got starting quarterback D’Wan Mathis back from injury to gain more experience in the Wagner game, throwing for 292 yards and two TDs. Memphis, meanwhile, starts a true freshman QB, Seth Henigan, who loves passing to Calvin Austin III. Austin caught six passes for 142 yards and a TD last Saturday, and Temple fans may recall his name from when he caught six passes for 184 yards and a score when Memphis beat Temple 41-29 last year.