Having just leapfrogged the Nittany Lions in the rankings, Hawkeyes are a slight favorite at home 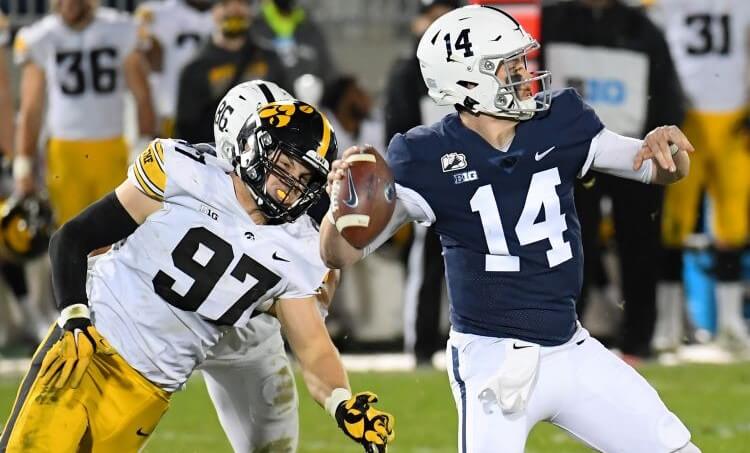 It would have been hard in early September to envision just what a spectacle Penn State’s visit this Saturday to Iowa’s Kinnick Stadium would be.

You now have No. 3 Iowa hosting No. 4 Penn State on nationally televised Fox at 4 p.m. in a game between a pair of 5-0 team Big Ten teams. Both have more ambitious postseason aspirations than the potential just to meet again for the conference title in Indianapolis Dec. 4 (although that rematch is certainly a possibility with which either would be happy).

The Hawkeyes are a small favorite on Pennsylvania’s online sportsbooks to win their most important game in many years, while the Nittany Lions once more get a chance to show a national audience they’re for real this year — as they did against Indiana last week, Auburn prior to that, and Wisconsin prior to that.

Another NCAA game this week involves a Pennsylvania team and one ranked in the AP top five. Temple is the unranked team though, a huge underdog of nearly 30 points while visiting undefeated Cincinnati, which the oddsmakers rightfully consider a superior opponent to the Memphis squad the Owls surprised by beating last week.

One of these teams will emerge No. 3 or better

Penn State looked mighty strong last week in beating Indiana 24-0, but some folks must have seen Iowa as looking even better in trouncing Maryland 51-14, as the Hawkeyes leapfrogged Penn State in the polls.

It sets up the first matchup between two top five teams at Kinnick Field since 1985 and the first meeting since 1962 between two Big Ten schools ranked in the top five with neither Michigan nor Ohio State involved.

One of these teams is certain afterward to be ranked third — if not better — no matter the outcome. And as of Thursday morning, most of the Pennsylvania sportsbooks listed Penn State as a 1.5-point underdog, although BetMGM, FOX Bet, and Caesars were using a 2-point spread, making them better options for PSU backers.

The best moneyline offering for a Penn State victory was the +110 from DraftKings, Caesars, and Betway. The points total over/under was as low as 40.5 at DraftKings and Betway and as high as 41.5 at FanDuel.

Experienced bettors would recognize that as an extremely low over/under for an NCAA football game, reflecting what stout, stingy, hard-hitting defenses both teams bring to the contest.

Penn State is just coming off that shutout of the Hoosiers, after all, and allowing just 12 points per game.

Iowa, which itself beat Indiana 34-6, forced Maryland to cough up the ball seven times and leads the nation in interceptions while possessing a plus-12 turnover ratio. The game could hinge on whether the Hawkeyes are able to do anything similar against Lions QB Sean Clifford, who has been good at avoiding the kind of interceptions that cost Penn State last year in a 41-21 home loss to Iowa.

That loss made the Lions a historically bad 0-5 last November, but they have won all nine games since. Under James Franklin, Penn State is 4-1 versus Iowa and 2-0 at Kinnick Stadium. On Iowa’s side, it is an impressive 4-2 at home since 2000 against teams ranked in the top five.

One trump card for Penn State bettors: FanDuel is using another of its occasional “Spread the Love” promotions for the game, moving the line a point in the Nittany Lions’ favor for each 500 bettors. The maximum wager and profit is $25, and with the special line standing at Penn State +84.5 as of 2 p.m. Thursday (and still growing), it seemed an unusually safe venture.

Temple likely stuck at three wins for one more week

Temple fans are presumably happy to see the Owls with three wins after getting just one in the COVID-shortened 2020 season, and last week’s 34-31 win as a double-digit underdog against Memphis was especially sweet.

But that double-digit disadvantage in the eyes of the oddsmakers now adds up to 29 or 30 for Friday’s 7 p.m. game at Cincinnati. That 30-point margin offered by FOX Bet would be the best site for an Owls backer.

The over/under on points in the game is generally set at 54.

BetMGM and Caesars are both offering a 20/1 payoff for a Temple upset, and stranger things have happened, considering the Owls have won four of the last five meetings between the schools.

But those Cincy teams weren’t quite like this one, which gained a lot of respect by beating a little-known school called Notre Dame 24-13 last week. That’s after beating Miami (Ohio), Murray State, and Indiana previously.

The Bearcats are well-balanced, coming into the game 17th in the nation in scoring (38.3 points per game) while 20th in scoring defense (14.5). They may not feel threatened by the Owls, but they do have special motivation in trying to become the first non-power conference NCAA football team to qualify for the College Football Playoffs.

For Temple to have a chance, its defense will have to play better than it did against Memphis while the offense gets a performance similar to what it delivered in that game. QB D’Wan Mathis completed 35 of 49 passes for 322 yards and three TDs in his best outing to date.

The Owls also ran for 159 yards, and if they can somehow do that again, there’s a good chance for a moral victory at the very least, as well as a reward for those using the big point spread.