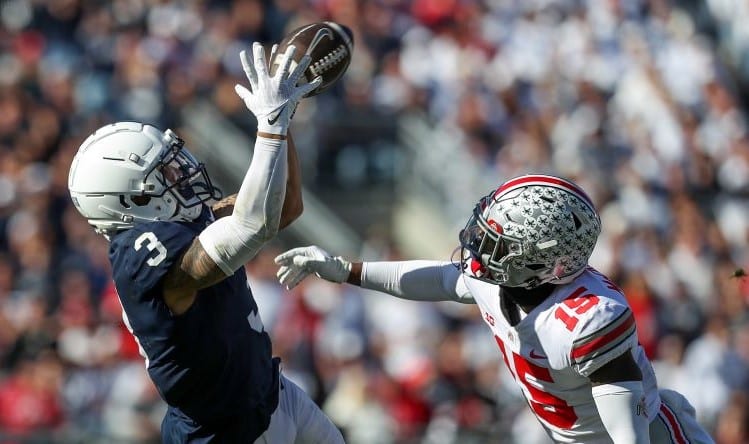 Pennsylvania’s NCAA football teams all had a chance to come away with impressive wins late in last Saturday’s games, only to end up with disappointing losses.

This week, Penn State is favored to make a big rebound at Indiana, Pitt is a small favorite at home over nationally ranked Syracuse, and Temple is given so little credit that it’s a home underdog vs. a South Florida team that has beaten only Howard this year.

Below, we run down the best betting options from Pennsylvania’s online sportsbooks as of Thursday morning for those interested in the state’s teams.

If not for four turnovers against national powerhouse Ohio State in a 44-31 loss, Penn State’s situation would look very different today. But those turnovers can’t be erased from a game the Nittany Lions led 21-16 with fewer than 10 minutes remaining, and so Penn State (6-2, 3-2 Big Ten) is ranked 16th instead of in the Top 10 and is out of the running for a conference title.

The Nittany Lions travel to Bloomington to play Indiana at 3:30 p.m. local time Saturday, and the Hoosiers (3-5, 1-4) shape up as the kind of opponent that should help the Lions lick their wounds. A 24-17 loss to Rutgers marked Indiana’s fifth straight defeat.

Penn State is almost universally a 14-point favorite for the contest, so a backer of the team would be wise to use FanDuel as the exception with its 13.5-point spread. FanDuel and BetMGM are both offering the best moneyline return for a Penn State victory at -550. The over/under is set at 50.5 across the board.

Penn State’s offense piled up 482 yards against Ohio State and would be expected to have no trouble doing something similar against an Indiana defense that is among the worst in the conference in a variety of categories. While sixth-year senior Sean Clifford’s three interceptions became a key story line Saturday, he did throw for 371 yards, particularly targeting Parker Washington in the wide receiver’s breakout game with 11 catches for 179 yards and a touchdown.

Though the loss to Ohio State marked Penn State’s 11th straight when facing a Top 10 team, the Nittany Lions have fared quite well against the Big Ten’s lesser teams, having gone 23-2 against Indiana in their series all time. It will be stunning if that’s not 24-2 by Saturday evening.

Pitt, Syracuse both look to turn things around

Pitt (4-4, 1-3) seemed on the verge of another successful season weeks ago, but last Saturday’s 42-24 loss to a ranked North Carolina team after earlier ACC defeats against Georgia Tech and Louisville have the Panthers reeling.

Syracuse (6-2, 3-1) perhaps commiserates with the disappointment. It ran out to a surprising 6-0 start, only to have a 41-24 loss to Notre Dame last week come on the heels of a competitive 27-21 defeat at ACC dominator Clemson.

Superficially, it still might seem like Syracuse should have the edge, but the oddsmakers like Pitt by a little more than a field goal for the 3:30 p.m. game at Acrisure Stadium. They may be factoring in that the Orange haven’t won in Pittsburgh since 2001.

Some betting sites have Pitt as a 4-point favorite, but there are options for a Pitt fan to give just 3.5 at FanDuel, DraftKings, BetMGM, and FOX Bet, among others. The best moneyline return on the Panthers was -180 from DraftKings, Betway, and Kambi-backed sportsbooks that include Barstool, BetRivers, betPARX, and Unibet. The points total is generally 48, although FanDuel stands a smidge higher Thursday at 48.5.

Among other things that could explain the game line, the Orange have bigger injury concerns than Pitt, with the loss of star cornerback Garrett Williams for the season and questions about whether starting quarterback Garrett Shrader can play after struggling from a prior leg injury and being yanked in the second half of the Notre Dame game.

Syracuse’s defense, meanwhile, gave up 246 rushing yards to the Irish after allowing 293 by Clemson, and Pitt has the best running back in the ACC and one of the best in the nation in Israel Abanikanda. He leads the nation in TDs and can be expected to see plenty of handoffs from quarterback Kedon Slovis, whose passing has been far less effective.

Pitt led North Carolina 24-21 at the start of the fourth quarter Saturday, only to see the Tar Heels score the game’s final 21 points.

AAC cellar-dwellers square off in Philly

There may not be a lot of national attention paid to a game featuring South Florida (1-7, 0-4) at Temple (2-6, 0-4), but oddsmakers put the same work into trying to post accurate lines for that one as they do for No. 2 Tennessee at No. 1 Georgia.

And they’ve come up with the Bulls as a 3.5-point favorite across the board for the 2 p.m. game at Lincoln Financial Field. At BetMGM, an Owls backer only has to pay -105 vig for that option.

FanDuel is offering the best moneyline return for a Temple upset at +146. The over/under is mostly 51, but FanDuel and BetMGM have it at 51.5.

South Florida, which hasn’t won since that Howard game on Sept. 10, sustained its sixth straight loss when facing Houston last week. Temple has four straight losses itself, but it gave Navy a surprise and scare by rallying from a fourth quarter deficit to send the game into overtime. The Owls could not score in extra time, however, and succumbed 27-20.