Analysis: Even In A Best-Case Scenario, Pennsylvania Online Gambling Ops Will Fork Over 35% Of Gross Earnings

The effective tax rate on PA online gambling will be bad, really bad, but maybe not so terrible as analyists initially thought.

They also suffered a harrowing defeat, as the bill was stained by an oppressive 54% tax rate on online slot revenue; the same rate which Pennsylvania imposes on its land-based slot terminals.

Online poker and casino table games will also be taxed at the land-based rate. However, that rate is a much more reasonable 16% on gross gaming revenue.

Whether or not Pennsylvania operators can find a way to thrive despite the hostile climate remains something of an open question. More known, is that even after making strategy adjustments, Pennsylvania online gambling operators will face an effective tax rate that is more than double that of its neighbor to the east, New Jersey.

Presuming Pennsylvania experiences the same split, online casino only operators would have to fork over a whopping 44.5% of their GGR, and casino/poker ops 40.5%, to state coffers. Admittedly, this is sort of a bear case scenario, but it does illustrate what Pennsylvania operators must prepare themselves for.

In New Jersey, the effective tax rate resides at 17.5%, slightly on the high side, but just 43% as high as our bear case for Pennsylvania. And this doesn’t account for the large disparity in licensing fees: $400,000 in NJ vs. $10 million for an all inclusive license in PA.

Various studies have concluded that online gambling tax rates between 15-20% are optimal. New Jersey has effectively proven this point, as revenue has climbed substantially with each passing year, and is expected to eclipse the quarter-billion benchmark in 2017.

But is it really that bad?

On a slightly positive note, there is reason to suspect that the effective tax rate in Pennsylvania will be somewhat lower than our bear case.

For one, operators stand to make a larger portion of their revenue from online poker in PA than NJ, as the industry will benefit from PA’s larger population base. The strength of online poker will only be amplified if PA joins the multi-state liquidity pact, currently shared by Nevada and Delaware, with New Jersey poised to join.

However, this tax break only applies to ops who buy into online poker, which will presumably be few in number. But there’s still hope for online casino-only operators.

Taking a look at revenue trends in Pennsylvania’s land-based casino industry, it’s apparent that operators have adjusted their strategies so that table games fulfill a greater role. 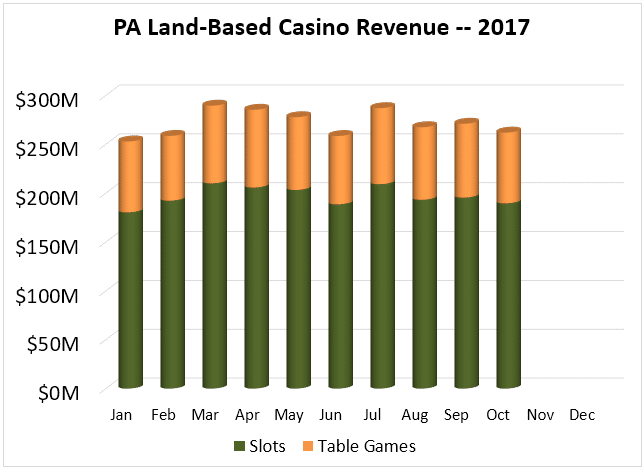 So far in 2017, table games (including poker) account for 27.4% of land-based GGR in PA, up from just over 20% in 2011 and 24.4% three years ago. Some of this has to do with the proliferation of stadium table gaming, but that just goes to show how creative ops are becoming at minimizing their reliance on slots. Online operators will likely adopt their own strategies.

In Atlantic City, table game revenue constitutes roughly 28.9% of GGR, 1.5% more than in PA. But slot returns are moderately higher in NJ (~91%) compared to PA (~89%), and table game rules are overall slightly worse. Also, let’s not forgot that table gaming is relatively new to PA, having only launched in 2010.

Given these two variables, it’s fairly remarkable that table gaming will likely comprise a bigger chunk of overall gaming revenue in PA as early as 2018. Assuming online operators aggressively push table games from the word go — a likely scenario — table gaming may account for 30 – 35% of online casino GGR in Year 1. For an online casino-only operator, that would lower the effective tax rate to as low as 40.7%.

Throw in online poker, under the asumption that operators will make 20% of their Year 1 revenue from the vertical, and the effective rate drops to 35.8%.

And that ladies and gentlemen, is on the very fringe of unsustainable. But it’s something.