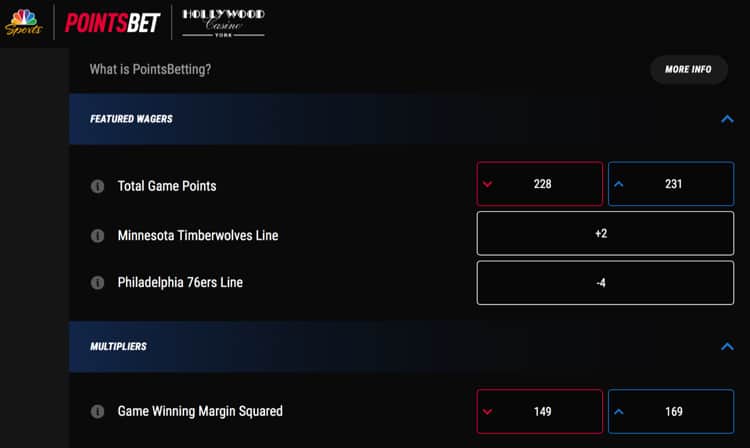 When a new online sportsbook comes to a state that already has a double-digit tally of available apps, it’s typically going to blend in with, rather than stand out from, the crowd. There are precious few potential game changers in a state like Pennsylvania nearly three years into the mobile betting era.

The 14th site to arrive in the Keystone State, PointsBet Sportsbook, launched in early February, and its lines, boosts, and bonuses aren’t dramatically different from any other operators’ options.

It does, however, boast one significant offering none of its competitors have: PointsBetting.

At every other sportsbook, you pick a side and you either win or lose a predetermined amount. In PointsBetting, as in horseshoes and hand grenades, close counts. You’re still picking a side, but the amount of money you win or lose varies based on how much you win or lose by.

While it may sound higher risk and higher reward than traditional sports betting, PointsBetting actually can function as a means to mitigate variance. For each wager, you (or the site) set limits on the amount you can win or lose. Also, most bettors will be inclined to risk far less per point than they would on a standard bet. And in the end, prevailing or failing by a single point doesn’t dramatically swing a bankroll the way it otherwise can. The financial difference between losing by 1 or winning by 1 is the same as the financial difference between winning by 1 and winning by 3.

For those who are new to the concept of PointsBetting, here are some insights on how it works.

The vig is baked into the lines

For James Harden’s 76ers debut on Friday night against the Minnesota Timberwolves, PointsBet’s traditional-style line is Sixers -2.5, and you can take either side of that number at -110 (meaning you would bet $110 to win $100).

With PointsBetting, the spread is designed to give the house a “middle.” So your options are Minnesota +2 or Philly -4. If the 76ers win by exactly 3, the operator wins — for a modest amount — all bets on either side.

The same is true of lines in other markets. For example, for the total points in the Sixers-Timberwolves game, a bettor can choose over 230 or under 227.

Two critical things to understand about all PointsBetting wagers are: (1) when it comes time to enter an amount to be wagered, that amount is per point (or whatever the unit of measurement might be, depending on the sport or market), and (2) all wins and losses are capped.

Importantly, for each bet, you set a limit on how much you are willing to win or lose. If you’re normally a $100 bettor and now you’re wagering $5 per point, it follows that you might set your limit at 20 points in either direction, so the most you can win or lose is $100. The more risk-inclined might bet $10 a point with a 20-point cap, meaning you can win or lose up to $200 — but you will, the great majority of the time, still win or lose some amount under $100.

One key detail: The amounts you can win or lose are not always going to be equal. For example, you can bet on the margin of victory, independent of which team it is that prevails. On a game with a 2.5-point spread, such as Sixers-Wolves, PointsBet gives bettors the options of “under 9” or “over 10.” If you take the under, you’re a favorite to win, since most commonly, the bookmakers think this game will finish with a 2- or 3-point margin. But you pay for that favorable line with the win/loss limits.

If you take under 9, the best you can do, should the game end up decided by a single point, is win eight times your bet. But PointsBet caps your loss at 30 times your bet. So even though a blowout with one team prevailing by the bankroll-impacting maximum in this example, 39, is rare, you do have to take on that added risk to get that seemingly bettor-friendly line.

The margin-of-victory bet is just one unusual option available to PointsBettors. Each basketball game also has a “game largest lead” market — for Sixers-Wolves, the options are under 18 or over 20 — and some player props are available closer to tipoff. But the real weirdness comes with “multipliers,” “accelerators,” and “performance metrics” bets, and those get much more complex and diverse in other sports than they are for hoops.

But let’s start with basketball, where there is one type of multiplier market for every game: “game winning margin squared.” It’s exactly what it sounds like. It’s the margin of victory, times itself. For Friday night’s 76ers game, the options are under 146 or over 166. If you take the under and the Sixers win by 3, congrats, you’ve won 137 times the amount you bet per point. But if Harden, Joel Embiid, and company prevail by 30, you lose 754 times what you’re risking per point.

NFL games have all sorts of creative multiplier bet options. On the Super Bowl, you could bet on a receiver’s yards times touchdowns — which means he’s putting up a zero if he racks up 200 yards with no TDs, but a 2-TD, 100-yard showing by Tee Higgins is worth 200 points. Another example of a football multiplier market is one starting quarterback’s number of completions times the opposing QB’s completions.

On the surface, hockey might not seem like a great sport for PointsBetting because there isn’t a whole lot of scoring. Rarely does a team cover the spread by more than four or five goals.

So PointsBet gets creative with its NHL markets. You can bet on the number of minutes into the game for the first goal, second goal, or first goal by a specific team. You can bet on a multiplier of one team’s goals scored times the other team’s.

You can also bet on either team’s “performance.” What the heck does that mean? For this market, a win is worth 25 points and each goal is worth 5, so if you’re betting on the New Jersey Devils over 29 Friday night and you’re hoping to come out ahead, you need them to either win or score six goals in defeat. And if they happen to win and score six goals, you’re profiting 26 times your wager amount.

Then there are the “first goal accelerator” bets. We’ll let the PointsBet site explain this one, using as an example Patrick Kane, who you can bet “over 26” on Friday night:

Mixed martial arts is the one other notable sport for which PB posts PointsBetting markets. One option is straightforward: total minutes a fight lasts.

The other option is not at all straightforward, as it’s another “performance” metric based on the outcome of the fight. You can bet either over or under for either fighter, and that combatant’s score can range from 0 points for a loss, to 10 for a draw, to 25 for a decision win, to 50 for a KO, TKO, or submission victory. As an example, for favorite Islam Makhachev on Saturday night, you can bet under 36 points or over 39; for his opponent Bobby Green, you can wager over 8 or under 5.

PointsBetting is not for everyone. But for those Pennsylvania bettors who’ve grown tired of the same old spreads and moneylines, it at least offers the opportunity for a whole different kind of sweat.