Philly Sportsbooks, Bettors Get A Rush From Success Of Eagles, Phillies 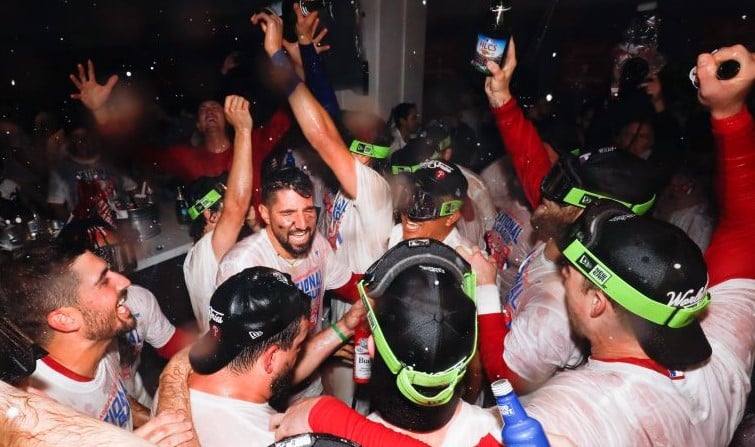 Native Philadelphian W.C. Fields once poked fun at his hometown’s image in the 1920s by suggesting his tombstone should read: “I would rather be living in Philadelphia.”

A century later, if he had even a kernel of fondness for sports, he’d be thrilled to be back in the city, whether rooting for the Phillies in the World Series or cheering on the undefeated Eagles at Lincoln Financial Field.

Or just maybe betting on those teams or the 76ers or Flyers in a crowded, legal southeastern PA sportsbook (as we’re guessing W.C. was a gambling man, legalities at the time be damned). Heck, even the Philadelphia Union are part of the fall’s Philly phenomena as a heavy favorite hosting the finals of the MLS Eastern Conference playoffs against NYCFC this coming Sunday night.

The betting parlors at the Rivers Philadelphia and Live! Philadelphia casinos have been madhouses during Eagles and Phillies contests. Even with the 6-0 Eagles resting from a bye over the weekend, fans and bettors erupted in the casinos when Bryce Harper’s eighth inning home run carried the Phillies into this Friday’s start of the World Series against the Houston Astros.

“I couldn’t put it into words,” Bryan Newman, sportsbook manager of Live!, said of the bedlam among hundreds gathered around the sportsbook Sunday. “The high-fiving and shouting — it was an unbelievable scene. I can’t even imagine what the World Series is going to be like.”

While more than 90% of the legal sports betting in Pennsylvania is done by phone or computer, every casino but the little Lady Luck Nemacolin uses a retail sportsbook to draw in customers as well. Those in the two casinos within Philadelphia’s city limits are among the most active ones.

The sportsbook at Live! Philadelphia — the casino an easy walk from where the Phillies and Eagles play — took $5.9 million in bets in September and made nearly $700,000 in revenue, according to figures from the Pennsylvania Gaming Control Board. A few miles away, Rivers Philadelphia was even busier, with $7.7 million in handle and almost $800,000 in revenue.

Typically, sportsbooks see more volume in October than September, and that should be even more the case this month than usual at the Philadelphia venues with all of the success of the local teams.

Justin Moore, casino general manager at Rivers Philadelphia, noted 20% of all wagers taken in the sportsbook on Sunday, Oct. 16, were on the Eagles-Cowboys game.

“That’s a big percentage, considering the menu of all of the wagering we’re offering in the book,” he said. “That speaks volumes to the amount of interest.”

Up to now, even with heightened interest in the Phillies in their surprising run through the postseason, Moore and Newman both said betting interest in the Eagles has dwarfed that of the baseball team. That’s a typical football vs. baseball thing in terms of popularity, with Moore estimating football betting might generally be about four times as high as that on baseball.

But with the World Series starting, that could change the equation.

Newman said betting on Phillies playoff games has been three to four times as high as what might be expected on baseball without the local team involved. Meanwhile, Eagles games are drawing about 150% as much action as on games without them.

That combination has helped produce record handle numbers in recent weeks at Live!, where the sportsbook is in its second fall season and first without COVID-related restrictions of any kind in the casino.

“When the local teams are winning here, the public is really behind them,” Newman said.

Local odds the same as national

Live! uses FanDuel as its odds supplier and to oversee its sportsbook, and Rivers uses odds from Kambi, the European company that provides odds for multiple online sportsbooks in Pennsylvania such as BetRivers and betPARX.

Even though betting by local fans in the brick-and-mortar locations gets skewed in favor of the home teams, Moore and Newman said their sportsbooks’ odds aren’t adjusted. The big national and international operators have so much betting taking place elsewhere that local shifts aren’t called for.

Thus, the point spread on the Eagles giving 10.5 points against the Steelers for Sunday’s game is the same for bettors walking up to the counter at Rivers Philadelphia as it is for a BetRivers or Barstool Sportsbook customer at their mobile sites across the country using Kambi odds.

At the Live! sportsbook, the Phillies were +140 as of Tuesday morning for Friday night’s series opener and +165 to win the best-of-seven series, just as FanDuel shows in every state.

FanDuel spokesman Kevin Hennessy told Penn Bets that action has been heavy across the country in recent days favoring both the Eagles and Phillies. The Eagles are the big operator’s third-largest liability in the Super Bowl market, and the Phillies are a bigger liability than the Astros in terms of payouts for a series winner.

As for futures bets on World Series MVP, Hennessy said “no one is even close” to Harper in terms of volume, with his odds at +650, the same as the Astros’ Yordan Alvarez.

While all the betting at the Philadelphia retail sportsbooks does create an imbalanced ledger for them if the local teams succeed, there’s no complaint about that from their managers. Newman, for instance, commented that the house has hammered bettors so well on NFL action this year — with lots of favorites losing and games being low-scoring — that it more than makes up for what fans are winning on the Eagles and Phillies.

“I know that our hold in the sportsbook lives or dies by the games that the hometown teams are in,” said Moore, who oversees the entire casino at Rivers. But he also noted that when sports bettors are successful, that can boost revenue in the rest of the venue, whether at food and beverage outlets or for other forms of gambling to which they may take their winnings.

“We’re always in it for the long game,” the general manager said. “It’s the best time of year, if you’re a sports fan, with all of the leagues playing at the same time.

“It’s exciting for us to be in a city that has such great sports teams and fans. To have that type of energy coming from our sports teams is great for the book, and it’s great for the energy in the casino. We want to see them go as far as they can. … We want winners.”