Phillies, Pirates Meet At PNC Park While On Different Paths 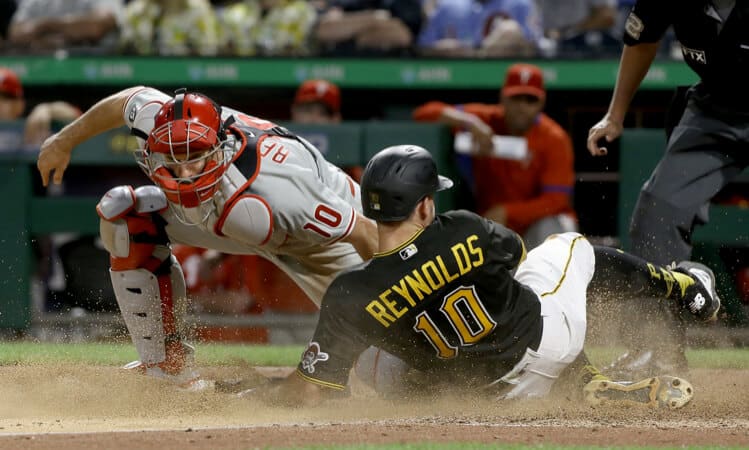 It’s taken nearly two-thirds of the MLB season for Pennsylvania’s two teams to finally face each other, and what’s happened in the middle third has been quite different for each.

The Phillies, whose 25-29 record in early June stood just one game better than the Pirates’, have surged to 51-47 since, with odds now slightly favoring them to make the playoffs as a wild card team while awaiting the return of some key players from injury.

The Pirates, meanwhile, have spiraled to 40-58 and will be looking by Tuesday’s trade deadline to acquire another prospect or two by trading some veterans who have at least played decently enough to be eyed by contenders.

Under those contrasting scenarios, the Pennsy teams begin a four-game series at PNC Park Thursday night with a tale of two different Zacks — or Zachs, depending on your and their preference. Phils ace Zack Wheeler’s capabilities (8-5, 2.78 ERA, 1.04 WHIP) make the visitors a hefty favorite over the Pirates and Zach Thompson (3-7, 4.64 ERA, 1.44 WHIP).

A Philly fan betting the moneyline at one of Pennsylvania’s online sportsbooks might be well-served at DraftKings and BetRivers, where their team is a -195 favorite, whereas a Pittsburgh backer might go to BetMGM to bet them at +165.

Unlike competitors, DraftKings also offers a series bet for the four-game set, in which Philadelphia is expected to use Bailey Falter, Ranger Suarez, and Aaron Nola after Wheeler. Pittsburgh is likely to counter with Jose Quintana, Mitch Keller, and J.T. Brubaker.

Those three-way series odds from DraftKings make the Phils +115 to win at least three games and the Pirates heavy underdogs at +340 to do so. A 2-2 split is priced at +160.

Trades could help Phils even more

The Phillies are an impressive 29-18 since Rob Thomson took over as manager from Joe Girardi on June 3, and that’s despite some key injuries that have sidelined Bryce Harper, Jean Segura, and Zach Elfin for chunks of time. Segura is expected to return next week as the first of those off the IL.

There’s widespread speculation that Philadelphia could look to upgrade with trades of its own by Tuesday, particularly to strengthen starting pitching or center field. Even with some absences and holes, though, the team just took two out of three games from the hot Atlanta Braves.

Ten games behind the New York Mets, the Phils are so far back in the NL East — in which they also still trail the Braves by seven games — that the sportsbooks interestingly give them a better chance of winning the World Series than the division.

FanDuel makes Philadelphia 50/1 to become MLB champions and 55/1 to somehow leapfrog to the top of the NL East. Those are more generous prices than the other sportsbooks currently offer.

On a more realistic level, the Phils have been dueling with the St. Louis Cardinals throughout July for what would amount to the National League’s third and final wild card spot. The Cards are 52-47 to the Phils’ 51-47.

DraftKings sets odds on Philadelphia making the playoffs one way or another at -120 on the yes, +100 (even money) on the no.

The rookie who has given Pirates fans the most hope for the future this season has been electrifying shortstop Oneil Cruz, who only arrived June 20 but in just over five weeks has hit six home runs and has 21 RBIs.

Cruz is only batting .221, but over a full season his stat line since arrival would be roughly equivalent to at least 30 HR, 80 runs, 105 RBIs, and 20 stolen bases. Hence, he remains a contender for NL Rookie of the Year honors.

Two Braves — pitcher Spencer Strider and outfielder Michael Harris II — are heavy favorites, but Cruz is among a few players behind them with realistic chances if the Atlanta rookies slow down.

Many sites currently list Cruz at 10/1 for the award, but BetRivers and other sites using Kambi odds make him 12/1, and FOX Bet goes a step further at present with a “boost” that sends the reward to 14/1 for a bet on him that wins.